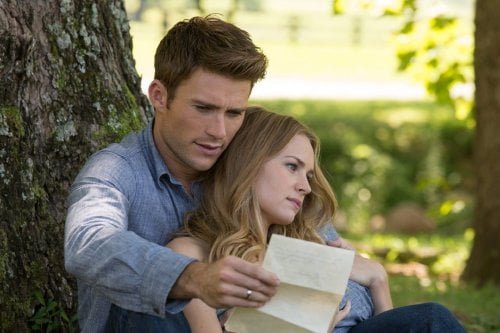 Sophia (Britt Robertson, TV's 'Under the Dome') thinks she knows what her immediate future holds for her until she impulsively goes to a bull riding competition and champion Luke Collins's (Clint Eastwood's son Scott) black cowboy hat falls into her lap. Her and Luke's paths take an even more fateful turn when they rescue elderly Ira Levinson (Alan Alda) and his box of love letters from a burning vehicle in "The Longest Ride."

A multi-generational love story a la "The Notebook," this latest Nicholas Sparks adaptation (written by Craig Bolotin) features most of the same old ingredients (letters, homes needing saving, military veterans, life threatening health scares, beaches, rain soakings, romance across socioeconomic divides), but this time around he also borrows an urban legend and the true story of Herbert and Dorothy Vogel for half of his story. While director George Tillman Jr. ("The Inevitable Defeat of Mister & Pete") spices up the proceedings with some jolting sequences shot from the POV of an 8 second bull rider, he also leans too heavily on lazy devices (a YouTube video featuring close ups and overhead shots(!) and a character's nonsensical delay in looking up said video), making this one more below average entry into a long line of them. Thankfully, Robertson and Eastwood, a softer version of his dad in looks and voice, are both easy on the eyes and generate a believable attraction, enough to hold out hope for both of their acting futures, while veteran Alda adds snap as the cantankerous on the outside sentimental on the inside Ira. Sophia and Luke have a great first date, Luke's gentlemanly consideration, especially considering the groupies this guy must attract, something from a bygone era. But their getting-to-know-you talk also serves up the obvious - he's a bull rider living in North Carolina while she's a New Jerseyite about to return to Manhattan for a promising art internship. Finding Ira's accident scene unites them in a cause, but Luke says goodbye at the hospital, Sophia deciding to stay until the old man is out of the ER. She looks into the wicker box she pulled out of Ira's car at his behest and finds a trove of love letters he'd written to his wife, Ruth, back in the 1940's, and when she's admitted in to see him, begins to read them to him. While Sparks has a thing about letters, his use of them here makes little sense as Ira was writing to Ruth while he was with her, making them more of a diary (the fact that he's kept his own letters is also a bit strange - usually love letters are saved by their recipient). What they enable are flashbacks to Ira and Ruth's story, played by 'Boardwalk Empire's' Jack Huston, who bears little resemblance to Alda, and "What If's" Oona Chaplin, a bit overly madcap. Ira manages to engineer Luke and Sophia's reunion, but Luke's risk-taking causes an act three breakup. After all the obstacles presented in both relationships, Sparks overdoes things allowing Luke to have his cake and eat it too. Eastwood has natural charm, good looks and a humility here that makes him the perfect romantic package. Robertson isn't afraid to look goofy acclimating herself to Luke's lifestyle, a nice contrast to the self-confidence she displays in Sophia's. These two are good together, despite the material. Also on board is Lolita Davidovich ("Raising Cain") as Luke's no nonsense mom, Gloria Reuben ("Lincoln") as Sophia's future boss and Melissa Benoist (TV's 'Glee,' "Whiplash") as Sophia's fun loving friend Marcia. "The Longest Ride" is a fantastical love story Sparks fans will probably love, made more endurable for the rest of us by a cast giving it more commitment than it's worth. Grade: