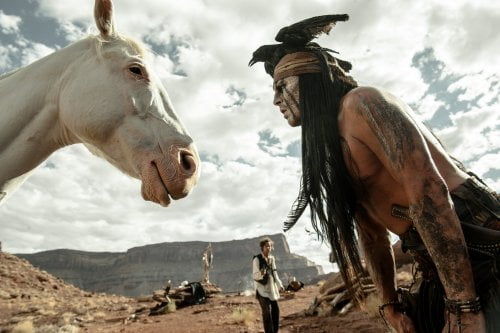 In San Francisco, in 1933, a young boy wearing a cowboy outfit and mask wanders through a natural history exhibit at a local carnival. When he comes upon the Brave Native American warrior display, he is stunned when the noble savage talks. The ancient warrior tells the boy the amazing true story of the making of a legend known as “The Lone Ranger.”

In 1933 San Francisco a little boy wearing a white cowboy hat and a black mask wanders into the Wild West exhibit at a fair and is astonished when The Noble Savage exhibit movies its eyes. It's Tonto (Johnny Depp) himself, now very old, and young Will will be treated to his rambling tale of how the bumbling brother of a man he admired as a great warrior became "The Lone Ranger." Now here's a summer tentpole that's arriving with a whole lot of baggage which began last year when an image of Depp with a stuffed bird on his head hit the Internet. And then there's the fact that it's directed by Gore Verbinski, the man responsible for all those horrifically bloated "Pirates of the Caribbean" sequels. But Verbinski's also the guy who gave us the subversive, animated "Rango," and despite this film's excessive run time and the screenwriters' (Justin Haythe ("Snitch") and Ted Elliot & Terry Rossio of those "Pirates" sequels) decision to turn the Ranger into an inept supporting player, Verbinski's crafted a somewhat more artful movie here than one might have expected. Take that bookending device, for example. Firstly, the young Lone Ranger fan could be a ten year-old Pee Wee Herman and the makeup used to age Depp a la "Little Big Man" is impressive. The "Little Big Man" comparisons don't end with the makeup though. In telling the tale of the Lone Ranger, what we really hear is the story of American corporate greed and Native American Indian genocide, beginning with the silver prospectors who wipe out young Tonto's tribe and ending with the railroad men who fake a Comanche raid in order to take over their territory. The film looks stunning, shot widescreen on good old-fashioned film stock in all those classic Western locations including Monument Valley (cinematography by Bojan Bazelli, "Rock of Ages"). Every character shows the dirt, grime, sweat and dust accumulated from the landscape. There are artful transitions, like one from a glass of liquid to the desert, the device reminiscent of those used in Coppola's "Dracula." The extended climax involving a train, just like the opening action scene, rivals (owes?) Kim Ji-woon's in "The Good, the Bad and the Weird." 'Nature out of balance' is a constant theme and so we have rabid bunnies ("Rango" again), one transformed into Verbinski's own jackalope with fangs created from the scorpion it's devoured. Silver has more personality than most Western horses, although sometimes the jokes can go a little too far - and there's the rub. Depp, who recently bowed out of playing Whitey Bulger because it would have required dropping his $20 million fee, has gotten rich playing Disney theme park amusements and it's getting bloody boring. It's the same purse-lipped, wide-eyed, deadpan schtick we got with Jack Sparrow and Barnabus Collins, tarted up with new accessories and gestures - here the sprinkling of cracked corn. Sure he can still be entertaining, but one despairs of ever seeing him actually act again. As John Reid, Armie Hammer ("The Social Network") is saddled with playing a dolt - not until well past the two hour mark do we see any behavior befitting the Lone Ranger (cue the William Tell Overture). As lead bad guy Butch Cavendish, William Fichtner's ("The Dark Knight") performance relies heavily on his makeup and as his corporate parallel Cole, the incredible Tom Wilkinson ("In the Bedroom") is rendered stock villain. Even Barry Pepper disappoints as an Army captain meant to evoke Custer, although Harry Treadaway ("Control") adds some interest as Butch's cross-dressing gang member. Depp's constant collaborator Tim Burton's constant collaborator Helena Bonham Carter plays an allied floozy with a pegged scrimshaw leg that doubles as a firearm and Ruth Wilson ("Anna Karenina") is the Ranger's sister-in-law and love interest but mostly doubles for Michelle Monaghan. Saginaw Grant is fun as Chief Big Bear, the man who tells John Reid Tonto's tale. "The Lone Ranger" is no "Wild Wild West" - it's got far more going for it than that. But it's also got its problems and the Lone Ranger and, to a lesser degree, Tonto, shouldn't be two of them.

The old TV series, starring Clayton Moore as the titular ranger and Jay Silverheels as his faithful companion Tonto, was a staple of my youth. So, it was with curiosity and qualms (the runtime is 2 and 1/2 hours long) that I attended a screening of the film based on these two iconic American legends. With the “Lone Ranger,” Gore Verbinski gets away from his pirates franchise and tackles an American fable that was spawned with a radio program in 1933. The result is a big budget action fest that does something remarkable – it held my interest for the entire film. The exciting action sequences are over the top in a comic book way but it is the chemistry between Johnny Depp and Armie Hammer, Tonto and his faithful companion John Reid, that makes the time fly. Depp steals the show every minute he is on screen but Hammer also gives a good spin to his naïve lawyer turned masked avenger. Both give good natured and funny performances. If you are not familiar with the legend of the Lone Ranger it goes like this: John joins his brother Dan as a Texas Ranger. They are on the hunt for the notorious Butch Cavendish gang and are set up for an ambush. All, except for John, die in a blaze of gunfire. He is rescued by Tonto and the pair set off on a mission to bring the Cavendish gang to justice. Add to this bare bones story line the stars’ performances, seamless production and special effects that do not bombard the eye and ear, as was the case with “Man of Steel.”. There is a lot of chasing going on, much of which takes place aboard speeding transcontinental trains. The filmmakers take every opportunity to bring back those thrilling moments of yesteryear – you will know them when you see and hear them. Even though dealing with such things as corruption, murder, breaking treaties with the Comanche and building the transcontinental railroad, the screenwriters keep the mood light with Tonto being wise, funny and a bit of a lunatic. All in all, “The Lone Ranger” exceeded my expectations.