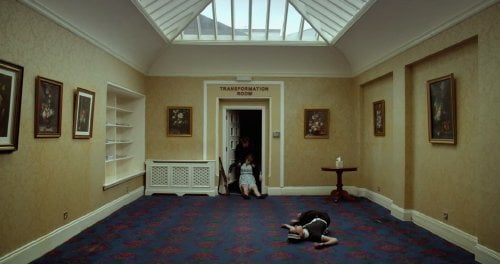 Having been left by his wife, David (Colin Farrell, "In Bruges," "Horrible Bosses") must abide by the rules of The City, going to The Hotel where he must find a mate within 45 days or be turned into the animal of his choice and released. Because of its life-long fertility and longevity, David chooses "The Lobster."

Cowriter (with Efthymis Filippou)/director Yorgos Lanthimos made an art house splash in 2010 with his black comedy "Dogtooth." While his latest is still dark in its outlook, it's also more laugh-out-loud funny, it's witty absurdism complemented by its deadpan acting. The film can be seen as an argument against arranged marriage versus love match or, taken a step higher, for the demands society makes of individuals. The Hotel is run by its Manager (Olivia Colman, "Hot Fuzz," "Tyrannosaur") who takes its rules anything but lightly. Everyone must give over all belongings, issued identical clothing for their stay. Masturbation is forbidden, but sexual stimulation by The Maid (Ariane Labed, "Before Midnight") is mandatory (we only see David's experience, left to imagine the female guests' equivalent). Demonstrations featuring hotel staff outline the benefits of partnership with all the verve of an industrial video. Those who escape the grounds, Loners, are optionally hunted by hotel guests, each receiving an extra day for every tranquilizer dart that takes down its target. Dave, who arrives with his brother Bob in dog form, is generally referred to by his room number, 101. Dazed by his wife's betrayal and The Hotel's rigidity, he makes friends with a Lisping Man (John C. Reilly, "Step Brothers," "Guardians of the Galaxy") and a Limping Man (Ben Whishaw, "Suffragette," "Spectre"), the former one of the more upbeat guests, the latter determined to find a partner. Dave asks a woman suffering nosebleeds (Jessica Barden, "Hanna") to dance, but it is the limper who sets his sights on her, feigning his own bloody afflictions. Meanwhile, Dave approaches a heartless woman (Angeliki Papoulia, "Dogtooth"), winning her over when he fails to assist as she chokes in a hot tub. The lisper gets a public punishment, his hand stuck in a toaster for disobeying masturbation rules. Another guests jumps out a window. As The Hotel's matches, rewarded with 7 days on a yacht, produce less than stellar results (the limper and nosebleed woman show up with a tween daughter, The Hotel's 'solution' for marital problems), Dave, having rethought his match when Bob suffered for it, throws his lot in with the Loners, meeting another short-sighted person (Rachel Weisz, "The Mummy," "Youth," who also narrates) he immediately falls for. But the Loners' leader (Léa Seydoux, "Blue Is the Warmest Color," "Spectre") has forbidden partnering. What's a couple to do? The film has two distinct halves with varying tones, The Hotel setup more outrageous, funnier, the Loners' rebellion more earnest with its lovers-on-the-run throughline. The production utilizes County Kerry's Parknasilla Hotel for its remote retreat with Dublin's Blanchardstown Shopping Centre a more futuristic, real world contrast in later, Loner scenes. Ireland's Dromore Woods have been outfitted with animals, many (a peacock, a camel, a flamingo) amusingly as out of their element as their human counterparts. Farrell, sporting glasses, a slight paunch and double chin, is a hopeful sadsack, a romantic accountant, a dichotomy the actor overcomes with his puppy dog eyes and wistful smile. Lanthimos's reflection on love in modern society begins with a shock, one which comes into focus as he lays out his strange tale. But his ending is darker still, visualizing Shakespearean idiom to a teeth clenching degree in its warped happy ending. Grade: