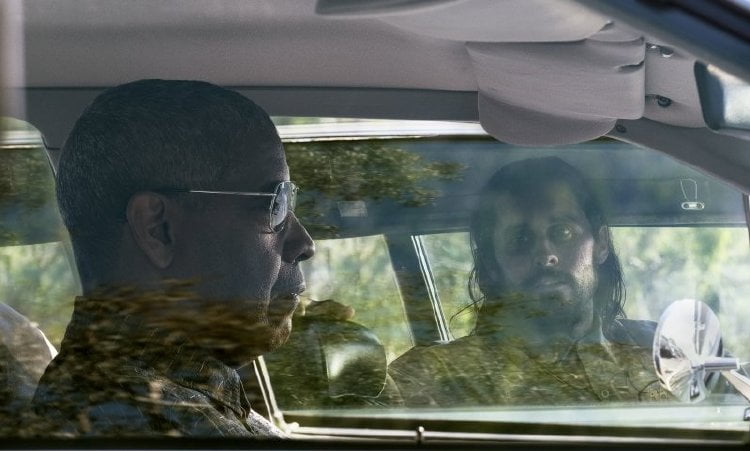 Kern County Sheriff’s Deputy Joe 'Deke' Deacon (Denzel Washington) isn’t thrilled when he’s tasked with heading to L.A. to get evidence that should help convict a Bakersfield suspect, and the mixed greeting he receives hints at something hidden in his past.  L.A. County Sheriff’s Homicide Department Sergeant Jim Baxter (Rami Malek) even tries to have his truck towed, but after noting Deke’s reputation and old school methods decides he might be just the man to help him solve his serial killer case with “The Little Things.”

Writer/director John Lee Hancock, who recently started tackling darker fare with "The Founder" and "The Highwaymen" after making his name with inspirational sports movies ("The Rookie," "The Blind Side"), tries to go full David Fincher with his latest, a project he’s been working on since the 1990’s, when it is set.   But his central idea, the thing that he spends two hours working towards, makes for an unsatisfying climax while several other themes he’s introduced, like the small details that can crack a case, get left by the wayside.  Despite casting three Oscar winners and director of photography John Schwartzman’s ("The Founder") effective nighttime lensing, “The Little Things” doesn’t add up to much.

The film’s opening is incredibly effective, even if its opening moments are ripped right out of “The Silence of the Lambs.”  As Tina (Sofia Vassilieva) drives along a rural road singing along to the B-52’s ‘Roam,’ headlights approach from her rear and a terrifying game of cat and mouse ensues.  We’ve been introduced to L.A.’s serial killer, but haven’t seen his face.

When Jimmy gets a call about a new victim, he invites Deke along and what seems like an army of police and various officials inspect a gruesome crime scene.  Deke spots something that reminds him of an old case, flashing back to two female bodies posed in a woody area.  He visits the coroner Flo Dunigan (Michael Hyatt, "Nightcrawler"), clearly an old friend, but when he asks for an old case file her entire manner changes when she sees whose it is.  He also talks to a landlady back at the crime scene and learns that a service call had been opened on the refrigerator at ABC Appliance, a shady operation with some shady looking individuals in its back room, including one Albert Sparma (Jared Leto).

Let me note that it takes quite a while for Leto, almost unrecognizable wearing dark contacts and a nose prosthetic even if the long hair and beard are his usual usual, to be introduced and, sadly, he’s really the only interesting character in the film, taunting, intelligent and guarded, posing a very eerie threat.  It’s Deke we’re supposed to be interested in, but Hancock keeps introducing aspects of his character only to leave them dangling.  Deke tells Jimmy that it’s ‘the little things that get you caught,’ asking about a victim’s last meal – and we never hear about that bit of evidence again.  Deke drops by to see his ex-wife and asks about his daughters, and they are never mentioned again.  Deke hones in on bite mark evidence and, yes, it’s dropped, because what Hancock’s interested in is what’s haunting him, and no, it’s not that he never solved that prior murder which is exactly what the filmmaker’s made his audience interested in.

There are other oddities in the film, like the fact that the last two victims happen to strongly resemble Jimmy’s wife Ana (Isabel Arraiza), another red herring that goes nowhere.  Don’t get me started on the dog Deke says goodbye to expecting to be home the same day who is, apparently, forgotten as well.  All of the film’s best scenes feature Leto – Albert coming upon Deke checking out his car, Albert in the interrogation room and Albert pulling up alongside Deke on the road in a repeat from that killer opening scene.  The film’s climax is beautifully shot but a narrative letdown.  In addition to Washington and Malek’s less than engrossing characters, a number of supporting players like ‘True Blood’s’ Chris Bauer, ‘24’s’ Glenn Morshower, Joris Jarsky, Terry Kinney and Natalie Morales are little more than set dressing.  Thomas Newman’s ("1917") score features a lot of harp plucking and ethereal moaning set to a tinkling piano.

John Lee Hancock is a solid filmmaker and you can see what he’s going for here, but after thirty years of tinkering he’s failed to execute it properly.  (Ironically, David Fincher’s latest, “Mank,” was produced from another 1990’s script, his father’s, to much better effect.)

Warner Brothers releases "The Little Things" into theaters and on HBO MAX on 1/29/21.