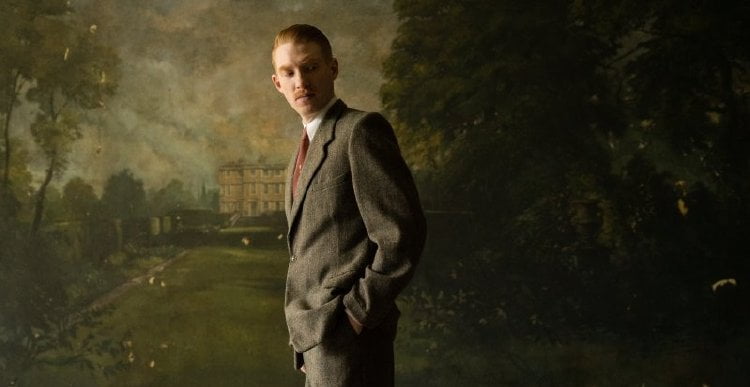 Dr. Faraday (Domhnall Gleeson) grew up as the son of a maid in Ayres family’s opulent Hundreds Hall manor in Warwickshire, England. In the summer of 1947, he returns to the town to enter a small medical practice, which brings him back to the manor house after his many years away in “The Little Stranger.”

When he's called to Hundreds Hall in 1948, Dr. Faraday (Domhnall Gleeson) remembers a special day in his childhood, when, as the child of a maid there, he met Susan (Tipper Seifert-Cleveland), the young and beautiful daughter of the Ayres family who owned it. The estate has now fallen into disrepair and surviving family members Mrs. Ayres (Charlotte Rampling), her son Roderick (Will Poulter) and daughter Caroline (Ruth Wilson) all seem anxious, their lone maid Betty (Liv Hill) frightened, in "The Little Stranger." Lenny Abrahamson began his feature directorial career by putting Michael Fassbender into a giant papier-mâché head, then went on to tackle a film mostly located within a claustrophobic "Room." Now he's bucking the odds again with a genre defying adaptation of the Sarah Waters novel (screenplay by "The Danish Girl's" Lucinda Coxon) his own distributor doesn't seem to know what to make of. But Abrahamson has cracked this Gothic ghost story with impeccable production design and art direction (by "Tulip Fever's" Simon Elliott and Bill Crutcher), a stellar turn by star Gleeson and his own directorial slow burn. There may be supernatural goings-on at Hundreds Hall, but it is the post-war destabilization of class barriers that is this movie's driving force. Upon arrival, Faraday is greeted by Roderick, a severe burn victim, but not the man needing medical attention. That would be Betty, who admits that while she was feeling poorly, she'd hoped if her prognosis were bad enough, she'd be sent home. Faraday's instructions to Caroline, who when met in the kitchen could have been mistaken for the maid, are to not leave Betty alone in the basement where the maids' quarters are located. Driving down a wooded road, Faraday stops short of hitting Chip, the Ayres' dog. In speaking with Caroline, he offers to try new treatment on Roderick. His device helps enormously, Faraday becoming a regular and welcome visitor to Hundreds Hall. But when he's invited to an intimate social function by Mrs. Ayres, Roderick refuses to leave his room, convinced something bad is about to happen. Faraday is taken aback when he learns the purpose of the gathering is a matchmaking effort, Mrs. Ayres hoping to infuse some wealth into her estate by marrying Caroline to the right man, but the evening is upended when a guest's daughter ventures behind some drapes with the old family dog and suffers a hideous mauling. Chip, who fled the room in obvious terror, is blamed, and Caroline is distraught when Faraday is called to put him down. Although he's advised to distance himself by his senior practice partner, Faraday becomes more involved with the Ayres when he hears they are moving forward with a land sale that will bisect the estate's park. Soon after declaring Roderick not in his right mind, the bookshelves in the man's room spontaneously combust and Roderick is taken away to a psychiatric hospital. Faraday begins to woo Caroline, who has found disturbing scratchings on both the windowsill where their guest was attacked and in her mother's wardrobe, the scrawled first initial of her deceased sibling. Some might find "The Little Stranger" slow moving, but Abrahamson's pace is quite deliberate, a detailed build of character traits and tells. Gleeson is pitch perfect here, all restrained decorum spiced with concerned intimacies and self effacing recollections. Wilson is his opposite, the type of down to earth aristocracy who wears old men's trousers. Also strong is Poulter, an actor whose range continues to impress. Only Rampling fails to make much of a mark here, her role requiring only graciousness or fear. They are all aided by a meticulous production, every aspect notable from a Hundreds Hall seen in both former refined elegance and current crumbling neglect to Steven Noble's ("The Theory of Everything") character defining costume design, Ole Bratt Birkeland's ("American Animals") fine camera work and Nathan Nugent's editing. "The Little Stranger" is a finely tuned adaptation whose social subtext adds thought provoking irony to its surface chills. Grade:

Director Lenny Abrahamson is not exactly the kind of helmer known for vaguely supernatural period dramas about the decline of aristocratic fortune in post-WWII England. He came to attention with his oddball but fascinating character study, “Frank (2014)” and his follow-up film was the Oscar-nominated (and Lead Actress winner for Brie Larson) “Room (2015).” “The Little Stranger” adapts (by screenwriter Lucinda Coxon) the 2009 gothic ghost story by Sarah Waters and stars that chameleon of character actors, Domhnall Gleeson, as the enigmatic Dr. Faraday. We meet the physician as a boy attending, as the son of his maid mother, a festive gathering at the grand Hundreds Hall, owned for over 100 years by the Ayres family. There, he is given a medal by family matriarch (Charlotte Rampling) and it was a memorable day for the boy. Now, after working his way through medical school, Faraday returns home, a respectable country doctor. When summoned to the now-dilapidated Ayres manor to treat a servant, he finds the family struggling financially and the manor a shabby shadow of its past glory days. The man of the manor, Roderick (Will Polter), was severely burned during the war in a plane crash and is in constant pain. After his first visit, Dr. Faraday returns to treat him with his newly invented electro-therapy machine, which helps reduce his suffering. The doctor becomes a fixture at Hundreds Hall. But, the doctor’s arrival leads to strange changes in the manor as Roderick feels an evil presence in the house and refuses to join a soiree put on by his sister, Caroline (Ruth Wilson). Faraday urges him to come down but Roderick declares he has “a bad feeling.” He finally acquiesces and, as Roderick enters the room, the gentle old family dog badly malls the daughter of a guest. Roderick’s bad feeling soon possesses him totally and he begins to drink constantly, deteriorating both mentally and physically, and forcing the family to commit him for treatment. The Ayres’s crisis, though, is still just that and, despite Faraday’s attentions and possible marriage to Caroline, the bad feeling, feared by Roderick, prevails. The evil lurking in Hundreds Hall infects all and the manor’s decline continues. While there is a latent supernatural edge to “The Little Stranger,” it is the story of aristocratic fall-from-grace at the time of the rise, socially and economically, of the working class in Britain that held my interest. Warwickshire exemplifies that world in the throes of change as the Ayres must sell off their treasured lands and possessions just to maintain a false semblance of normalcy at the manor. Faraday is representative of the new world order struggling with an identity crisis. He grew up in the shadows of the Ayres wealth and, while he is now a respectable member of the community, still holds the family in awe. Caroline is the subject of that awe, even as her aristocrat’s status erodes away, but his hopes of a marriage to her erode as well. Domhnall Gleeson lends unique character to every role he plays and his country doctor persona has the education and respectability but holds the Ayres family in higher esteem than it deserve. She, though, is in conflict between her past, well-to-do life and the one she now faces – the wife of a simple country doctor. These characters are real people and there is a dynamic between them. The production does an excellent job and uses Hundreds Hall as a real character. We see the place through young Faraday’s (Oliver Zetterstrom) eyes, at first, in all its grandeur in the days between the World Wars. When he returns as a respectable doctor, the manor is dilapidated and in decay. The passage of time and dramatic change in fortune of the Ayres’s family is visually depicted with that decay and says volumes of the changes of the time. The ghost story aspect of “The Little Stranger” is intriguing enough but, to me, it is the dual character studies of Faraday and Caroline, he representing the future social order and she the past that really kept my interest.