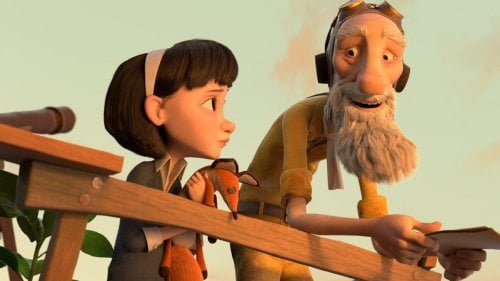 Many are familiar with the Antoine de Saint-Exupery story about a little boy, a prince, who leaves his home planet and comes to Earth. This classic tale is changed, but included, in the story of the Little Girl (Mackenzie Foy) who makes it her mission to fine “The Little Prince.”

An old man tells us how he once drew a picture of a boa constrictor after it had eaten an elephant, but the adult he showed it too thought it was a hat. Now The Aviator (voice of Jeff Bridges), an elderly dreamer, observes that the little girl (voice of Mackenzie Foy, "Twilight's" Renesmee) who's just moved in next door doesn't have time to be a child and so he begins to share with her the story of "The Little Prince." This French/Canadian coproduction from director Mark Osborne ("Kung Fu Panda") and screenwriters Irena Brignull ("The Boxtrolls") and Bob Persichetti is a creative, even subversive, adaptation of the Antoine de Saint-Exupéry classic children's story. The French are known for treating their children like adults, and so this little girl's 'Maman Tigre' (voice of Rachel McAdams) has given her a life plan consisting of fifteen minute installments of study, practice and chores with the goal of getting her into a tony school geared towards churning out 'essential' workers. The youngster first spies The Aviator when he creeps over to retrieve the propeller that's come crashing through the wall of her new home. Exasperated police appear and the sheepish Aviator supplies a large jar of pennies as recompense. When she begins to stuff the coins into paper sleeves, she finds several objects mixed in among them - a small sword, a rose, a green marble and a small figure of a boy, one who looks just like the drawing in the story The Aviator paper airplaned over from his turret. She pulls it back out of her trash and begins to read... The filmmakers use several different styles of animation to tell their story-within-a-story. The little girl is fashioned in the big-eyed, plasticine look often used in CGI. She lives in a cookie cutter neighborhood (The Aviator's house is a fantastical exception) of little color, her mother a corporate office drone, her father only present via gifts of snow globes all depicting the same city buildings. When The Aviator begins to tell her the tale of how he crashed in the Sahara and met a Little Prince (voice of Riley Osborne, "Kung Fu Panda"), the style shifts to hand drawn, but as the Little Prince nurtures The Rose (voice of Marion Cotillard) then planet hops to meet The Conceited Man (voice of Ricky Gervais), The King (voice of Bud Cort) and The Businessman (voice of Albert Brooks), stop motion animation inspired by the book's illustration brings us to yet another world. The adaptation ingeniously uses the classic as a real word example, continually folding in upon itself. Although it stretches itself a bit thin in its third act, the Little Girl saving the adult Mr. Prince (voice of Paul Rudd) from the parallel authorities looming in her own life, it has been charmingly realized. Especially wonderful is the character of The Fox (voice of James Franco), a stuffed animal in The Aviator's world who springs to life in The Little Prince's and never looks back (the filmmakers seal the deal by adding a stuffed toy's jingle to the creature's current day incarnation). Bridges adds whimsical warmth throughout the film, his distinctive voice like an affectionate grandfather's hug. Supporting players, which include Benicio Del Toro as The Snake and Paul Giamatti as the fearsome Academy Teacher, all complement their characters although Foy is a bit vanilla in the lead. "The Little Prince" was supposed to be released theatrically by Paramount, but after "Anomalisa" didn't live up to their expectations, they handed distribution over to Netflix. They may regret that decision as "The Little Prince" is one of the most inspired, delightful animations of the year. Grade:

The Little Girl’s Mother (Rachel McAdams) is raising her on her own, after her divorce, and insists that the Girl follow mom’s exacting life plan, a huge part of which is to get her into the prestigious Werth Academy. Part of that plan is to move into the same neighborhood as the school and the intrepid Mother buys a house – cheap. When they move in, they find out why – next door is a huge rambling manor owned by the reclusive Aviator (Jeff Bridges). The first meeting with their new neighbor occurs when, suddenly, a propeller comes crashing through the walls of their new home. The Little Girl watches as her neighbor creeps through the hole in the wall and retrieves his prop. Of course, the Mother calls the police. This unexpected first meet is the spark that brings the Little Girl into the fantastical home and world of the Aviator. He begins by telling her his story about when he crashed his biplane, many years ago, in the Sahara Desert. There he meets the Little Prince who helps him through his hopeless predicament. This is where director Mark Osborne and his animation team shift both gear and tone. The Little Girl’s world is shown in stark CGI with everything, except the Aviator’s home which is lush in color, gray and sterile – homes, cars and, especially, people. When the story shifts to the Aviator and the Little Prince, the filmmakers switch to stylish stop-motion animation. The contrasting anime techniques help to keep the separate stories distinct. The tale of two stories is about imagination, youthful curiosity and adventure – one classic and magical, the other about the realities of life in our cold, cruel world today. The flow between these stories stimulates the imagination – especially for youngsters. Paramount Pictures was supposed to open “The Little Prince” theatrically, but pulled it a week before its March release date. Netflix to the rescue!