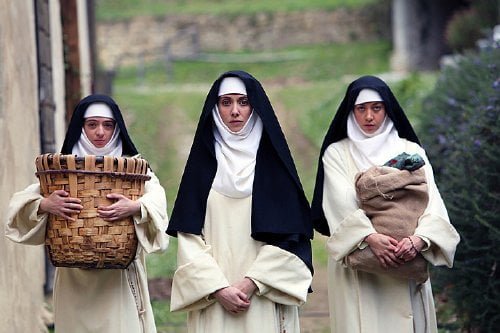 During the Middle Ages, Massetto (Dave Franco) escapes from his master and takes refuge in a convent, the nuns believing him to be deaf and dumb. One day as he sleeps, the nuns plot to use him to indulge their sexual desires, thinking Massetto will be unable to tell anyone. But Bishop Bartolomeo (Fred Armisen) arrives to condemn the perversions taking place during "The Little Hours."'

Writer/director Jeff Baena ("Life After Beth," "Joshy") adapts one of the hundred stories told in Boccaccio's 14th century 'The Decameron' with modern language and period bawdiness, but his attempt to add additional plotlines to the tale sap the material of its humor. The real talent behind Gunpowder & Sky's film is its trailer cutter, who has made a marginal comedy look side splitting. There are some initial laughs, but the cast probably had more fun making this than you will watching it. When the Lord Bruno (Nick Offerman) finds his wife Francesca (Lauren Weedman, "Wilson," whose nonchalant rebellion fuels the film's funniest performance) in bed with Massetto, he's outwitted by the servant, who escapes both him and his dimwitted guards ("Band Aid's" Adam Palley and Jon Gabrus). Massetto comes across the drunken Father Tommasso (John C. Reilly), who's just lost his cart full of convent goods in a stream. He helps him and the grateful priest offers to install him in the convent, their former gardener, Lurco (filmmaker Paul Weitz), having quit because of the nuns' harassment. The convent is a hotbed of jealousy and lust, its Mother Superior, Sister Marea (Molly Shannon), cooking the books and warming the sheets with Tommasso. Sister Alessandra (Alison Brie, TV's 'Community') gets special treatment because of her father Ilario's ('Mad About You's' Paul Reiser) donations, but he claims poverty for the dowry she hopes will spring her. Sister Fernanda (Aubrey Plaza) raises suspicions when she misses morning prayer, claiming their donkey had escaped its pen. Again. Sister Genevra (Kate Micucci, "Don't Think Twice"), always one step behind everyone else, tattles for attention. Initially, Tommasso's kind-hearted but hypocritical facade and the nuns' needy targeting of Massetto is amusing, especially in the confessional. But the arrival of Marta (Jemima Kirke, HBO's 'Girls'), a local witch, begins the film's downward slide. She's the one Fernanda slips out to see at night, until the night Marta slips in with sacramental wine. The women get up to no good, Fernanda's seduction of Genevra revealing her true sexual orientation, her subsequent rejection lighting a powder keg. The film has a lovely pastoral setting, complemented by its ironically spiritual score. Brie mines some humor from Alessandra's entitlement, but her predicament is confusing, just as we're left to wonder why the vicious, witchy Fernanda is in a convent at all. There's more comedy listening to Armisen roll out a list of sins than in anything we've actually seen. "The Little Hours" promises debauchery, but its premise is wafer-thin. Grade: