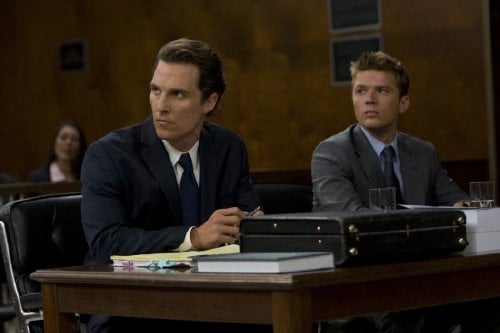 Mick Haller (Matthew McConaughey) is a Los Angeles criminal defense attorney who makes his living off petty criminals from his chauffeur driven Lincoln Continental. When he gets Beverly Hills playboy Louis Roulet (Ryan Phillippe, "Igby Goes Down") as a client on attempted murder, Mick thinks he's hit the big time but he's soon in over his head, manipulated into a corner via an old case in "The Lincoln Lawyer."

Now here's an old-fashioned thriller that feels like it came out of a time capsule circa 1970's starring the "A Time to Kill" era Matthew McConaughey in a role that is tailor made for him (and doesn't require him to take his shirt off). Mick's a wheeler-dealer, a lawyer who knows how to make money running scams while fighting for the little guys, criminal elements usually not given a second thought. Gary Lucchesi produced "Primal Fear" early in his career, and one can see what drew him to John Romano's (“Intolerable Cruelty”) adaptation of the Michael Connelly novel with its similar plot about the client who acts like innocence personified before revealing the depths of depravity. "The Lincoln Lawyer" may not be as good as that film was, but it kicks the concept up a notch with Mick's ironic reflection on his dad's old adage that there is nothing scarier than an innocent client. What Mick finds out on his own is that there's something even more awful - an innocent client one didn't believe in. The film kicks off with a screen split into compartments shaped like the Lincoln's hood ornament to the funky groove of “Ain’t No Love In The Heart Of The City." "The Take" cinematographer Lukas Ettlin gives us images that look like they were shot decades ago, the film beginning to yellow with age, the locations are rarely glamorous. As Mick's driven along by Earl (Laurence Mason, TV's 'The Shield,' 'Prison Break'), a double-barreled stream of choppers begins to engulf them. Mick tells Earl to pull over and negotiates a new payment for an incarcerated pot growing client from Eddie (country singer Trace Adkins), a biker few would want to mess with. But, Mick's upped his fee for flying in a witness from NY, a witness he later tells Earl can be found right here in L.A. He's a slick one, greasing palms and trading favors, lying with ease, and yet, when he meets Roulet, he's pretty confident in his client's story about being set up by a woman in a night club who recognized his wealth and had herself beaten after knocking him out. Mick puts his investigator, Frank Levin (William H. Macy, "Wild Hogs," AMC's 'Shameless'), on the case and Levin cops security video that bolsters Roulet's story...to a point. When Mick confronts his client about omissions, Roulet has excuses, but then something about the victim's head shot reminds Mick of an old case of his. McConaughey came back in a small way in "Tropic Thunder," but this is the first lead role he's had in a long time that showcases his talent. He's a hard-drinking Southern boy with the gift of sleight of hand who maintains a pretty hot relationship with his ex Maggie (Marisa Tomei). McConaughey conveys the nightmare of realization and tips his sideshow into courtroom dramatics to let his client know just who is playing who. William H. Macy hasn't been this enjoyable on the big screen in quite a while either, frankly, a long-haired flatfoot with a gift for cheerful sarcasm. The extensive ensemble includes Josh Lucas, John Leguizamo, Michael Peña, Francis Fisher and Bryan Cranston as well as lesser known names like Margarita Levieva ("Spread," "Adventureland") doing yeoman's work as a defendant worked over on the stand. The film is by no means perfect. An antique gun Mick owns is stolen to set him up in another crime and he later defends himself with an untraceable street weapon procured for him by Earl, yet both of these issues are forgotten at film's end, there only as long as they are useful to the plot. The film dawdles establishing shared parenting only to put both rather inebriated parties in a bar with no mention of their eight year-old until she just shows up the next morning. Some things are glossed over, others over indulged. "The Lincoln Lawyer," though, is a well plotted legal thriller with a low-down R&B style. Director Brad Furman bypasses the slick, empty tricks that make up so many movies these days for some plain old gritty filmmaking.