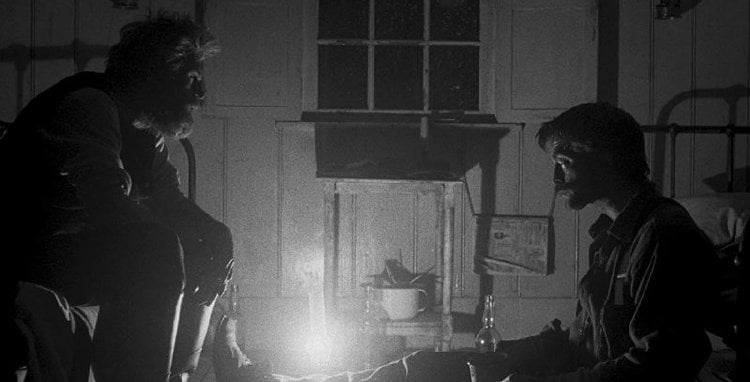 When sea captain Thomas Wake (Willem Dafoe) and his rookie wickie Ephraim Winslow (Robert Pattinson) arrive on a remote, barren island, they are supposed to be relieved in four weeks. Ephraim gets little credit for his hard work from Wake and is also denied entry to the tower where the ship-guiding light lives. Ignoring Wake’s superstitions, Winslow takes out his frustrations on a cawing gull. A storm comes in, their relief ship never arrives and the two men sink into madness under the sway of “The Lighthouse.”

Cowriter (with brother Max)/director Robert Eggers made a big splash with his debut, "The Witch," in 2015. Now after what appears to be the literal torture of one of his stars he returns with a film every bit as stunningly crafted if a bit more ambiguous in its mythology. “The Lighthouse” is often hilarious, often mysterious, as if Guy Maddin had made a seafaring version of a haunted the-inmates-are-running-the-asylum movie.

Upon their arrival on the rocky isle, Wake begins to dole out chores, Winslow to perform much-needed maintenance on the rundown lightkeeper’s house and its cistern while also shoveling coal into the furnace which fuels the lighthouse. At night while they eat dinner, Wake prattles on like a Melville character enjoying the illicit alcohol the taciturn Winslow refuses. During the day, Winslow is taunted by an aggressive seabird and haunted by Mermaid (Valeriia Karaman). At night, he watches Wake apparently worshiping the light at the top of his tower, a secret trip up its stairs revealing what appears to be a large eel like creature or Leviathan.

Everything changes when Winslow agrees to take a drink on his last night before the relief ship arrives. After a night of debauchery, they awaken to an approaching storm and no boat. In their increasing drunkenness, Winslow ‘spills the beans,’ telling Wake why he left his life as a logger. As the days drag on and the storm rages, the duo begin to drink their kerosene and Ephraim becomes obsessed with getting access to the light.

In hair, makeup, dress and speech, both Dafoe and Pattinson seem eerily transported from the 1890’s. Dafoe is the epitome of the old salt, dragging a peg leg and puffing on a pipe. We see Pattinson enduring the hardships of filming, struggling through neck-high water, having the contents of chamber pots blown back in his face. That both were able to descend into semi-coherence and maintain their North American 1890’s patois is remarkable.

The production itself is jaw-dropping in its harsh and eerie beauty and haunting sound design. In fact, one of the first things one notices are the sounds – a ship’s engine, waves churning, floorboards creaking, the low moan of a foghorn worked right into the rhythms of Mark Korven’s ("The Witch") score. The black and white film, shot in a boxy 1.19 : 1 aspect ratio by cinematographer Jarin Blaschke ("The Witch"), charts Winslow’s psychological wear with extreme close-ups yet alters his and Ware’s cramped quarters into a battlefield. In one amazing shot, Blaschke shoots Pattinson’s silent scream so that we see right down his gullet! Louise Ford’s (“The Witch”) editing allows just enough of glimpses into the fantastical; Winslow’s masturbations become mermaid copulation, Ware morphing into Poseidon himself.

In “The Lighthouse,” Eggers stages a battle of wills between two men in isolation and leaves it up to us whether the outcome is determined by mythology or madness. It is a quirky piece of work with one hell of an undertow.