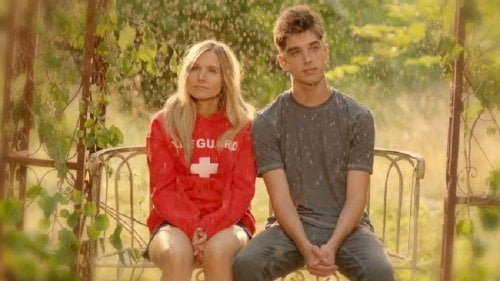 After writing a news story about a young tiger who died after being chained in a NYC apartment, Leigh (Kristen Bell, "Hit and Run") feels the need to leave the big bad world behind her. She quits her job, returns to her home town and tells her astonished parents she's moving back in, along with her cat, Moose. Her mom, Justine (Amy Madigan, "Gone Baby Gone"), isn't pleased and tells her she'll have to contribute so Leigh goes back to her old high school job of being "The Lifeguard."

Television writer Liz W. Garcia ('Cold Case') makes her theatrical writing/directing debut with a tale of arrested development that strains credulity to an overly literal soundtrack. Within its opening minutes Garcia astonishes with the notion that any 29 year-old would give up a paying job in print journalism and by the time the film's over she's ready to waltz back to NYC and into a job at the NY Times. In between these two mind-boggling events, we never get a real understanding of just what Leigh's problem is other than surmising mild depression and loneliness. Garcia does get a bead on small town community life, but only to pull out the old 'you can't go home again' chestnut. After settling in, Leigh reconnects with her two best high school friends. Todd (Martin Starr, "This Is the End") has yet to acknowledge he's living in the closet and uses his fine arts degree to work in a local gallery that is so under-patronized he can walk out whenever he wants. Mel (Mamie Gummer, "Side Effects") is a high school guidance counselor chafing against her husband John's (Joshua Harto, "The Dark Knight") desire to start a family. In other words, like Leigh, they're hanging onto the past, afraid to grow up. At least they find it odd when Leigh says her job pays well, at just over $9/hr. After getting the rundown on her condo complex pool from Big Jason (John Finn, TV's 'Cold Case'), Leigh meets his sixteen year-old son, called Little Jason (David Lambert), and his friend Matt (Alex Shaffer, "Win Win"). They're skateboarding slackers looking to get out and have pinned their hopes on Vermont to start a new life, but Jason has clearly taken an interest in this woman twice his age. Leigh is flabbergasted when a band of 10 year old boys not only refuse to comply with her command to stop running, but swear and throw things at her (it's not the place that's dehumanizing, it's the times). She gains the upper hand by challenging some cops who are telling Jason and his friends to stop skating in a public area. The next thing she knows, the lead 10 year-old is begging for readmittance to the pool and asking if she'll get the older kids off his back. Now that she's 'cool,' Leigh and her friends begin to mix into Jason's crowd in the same parking lot that's been the high school hangout for decades. All three adults act inappropriately, Leigh engaging in sex with Jason, Todd making a pass at Matt and Mel not doing anything to stop it while drinking with underage teens. Everything boils over with a tragedy that Garcia uses as a springboard for the others to assess their lives and move on. The old double standard is at play here, Big Jason repelling Mel's attempt at an apology for what's gone on with 'Why? Because he got laid?' We're supposed to believe in a mutually supportive emotional connection between Leigh and Jason, but in reality she's just being selfish delaying his departure and he shows a level of maturity and insight that's well beyond every other character in the movie. Leigh's traumatic tiger story and job at the pool are used metaphorically throughout the film. Now that filmgoers have been overwhelmed with man-child movies, are films like last year's "Hello I Must Be Going," HBO's 'Girls' and now this attempting equal opportunity navel gazing? At least the silly male counterparts didn't trend towards statutory rape.