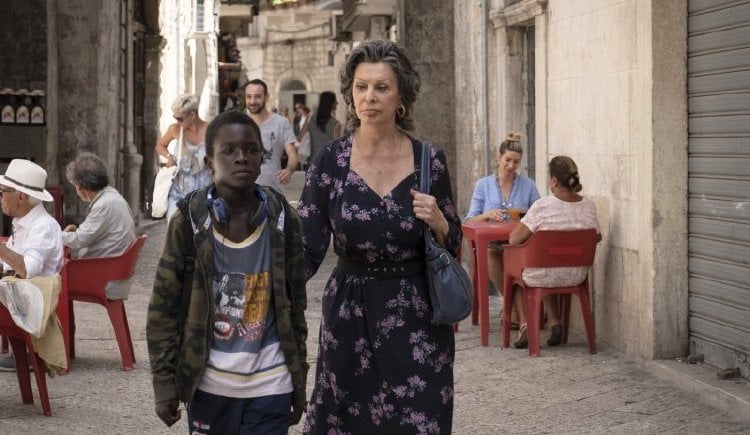 When 12-year-old Muslim Senegalese orphan Momo (newcomer Ibrahima Gueye) steals two heavy silver candlesticks from an old woman in a Bari marketplace, he doesn’t realize he has just attacked the patient and friend of the man who fosters him, Doctor Coen (Renato Carpentieri, "Open Doors").  Marched to the apartment of Madame Rosa (Sophia Loren) to apologize, Momo is dismayed to hear Coen offer her 750 Euro for his keep for the next two months of “The Life Ahead.”

Cowriter (with "Gomorrah's" Ugo Chiti, adapting the Romain Gary book)/director Edoardo Ponti was the last person to direct his mother with his 2014 short “Human Voice.”  Now, at 86 years of age, Loren returns in an Italian version of the role last played on screen by Simone Signoret in the 1977 French Oscar and Cesar winning “Madame Rosa” and does her son proud with a subtle and moving performance.  Ponti’s adaptation is grittier, his central relationship rockier, his Adriatic location beautifully woven into his themes.  This is one of the rare remakes (I use the term loosely as technically this isn’t a remake of the French film but another adaptation from the same source material) that is at least equal to the original.

The seaport of Bari on the eastern coast of Italy’s ‘boot’ has an air of transience about it, a place where shipments of goods and immigrants land before moving on.  Rosa, a former streetwalker, now makes ends meet by taking in the kids of other sex workers, like her good friend Lola (Abril Zamora) who lives downstairs, the former father and now mother of the adorable Babu (Simone Surico).  Iosif (newcomer Iosif Diego Pirvu) is a Romanian unsure if his mother will return, yet hopeful.  Rosa is helping him prepare for his bar mitzvah.  But the little hoodlum who knocked her down is another story and Rosa initially only takes him in under duress, isolating him in a tiny room where he draws and dreams of a lioness.

The first icebreaker will be Momo witnessing Lola getting Rosa to get up and dance, an activity we know he enjoyed with his late mother.  Then Rosa takes him to shopkeeper Mr. Hamil (Babak Karimi, "A Separation"), a Muslim, hoping to get some male guidance from the same background for the boy.  Hamil gets Momo’s interest with a rug that needs repairing and which happens to feature a lion.  Momo also becomes intrigued by Rosa’s ‘safe space,’ a room in the Holocaust survivor’s apartment building’s basement stuffed with mementos that Iosef calls her ‘Batcave.’  But unbeknownst to any of these adults, Momo has been recruited by local drug dealer Ruspa (Massimiliano Rossi), who gives Momo both a phone and a bike, a connection that must be broken just as Rosa begins to succumb to dementia.

Loren’s performance soars because she refuses to sentimentalize it.  She’s a steely survivor in physical and mental decline, the latter of which she makes scarily convincing.  That she finds the capacity to care for an angry young boy is handled beautifully by both the actress and her director, arriving at moments of understanding and connection organically.  And if Ibrahima Gueye initially seems to play Momo with mostly that one note of anger, give him some room.  This young newcomer is a natural talent, one who can express pride with his beaming smile and soulful empathy with his eyes.  They are a brilliant pairing surrounded by supporting players who all add their own flavors – Zamora humor and energy, Carpentieri seriousness and grounding, Karimi kind and patient guidance.

The film’s only real dip into overt sentimentality is in its closing original song, Diane Warren’s 'Io Sì (Seen),' but by this time Ponti’s delivered enough real world hardship and loss that his characters deserve a little uplift.

Young Momo (Ibrahima Gueye) is a troubled and troublesome kid, but kindly Dr. Coen (Babak Karimi) sees an inherent good in the boy. He begs his good friend, Madame Rosa (Sophia Loren), a former prostitute who cares for the kids of working ladies, to take the boy in - and she does, reluctantly - in “The Life Ahead.”

This straightforward adaptation of the Romain Gary 1974 novel, The Life Before Us, will be compared to “Madame Rosa (1977),” also an adaptation of the novel, starring Simone Signoret. The locales are different, from France to Italy, but not much else. That said, director Edoardo Ponti and his mom Sophia do a solid job in making the story and their interpretation their own.

Both adaptations hang their tales on the Gary book and, in execution, they are near identical. Momo enters Rosa’s life under less than ideal circumstances. Abandoned, he needs a place to stay and Madame R takes him in, but it is a rocky start. As their lives become inextricably entwined, a love develops between the old Hewish concentration camp survivor and the young Muslim boy.

The story is about the struggles both Rosa and Momo face in coping with their demons. For her, it is the painful memories of the war and her survival. For Momo, it is the loss of family, love and abandonment. They are two lonely spirits who, as we watch, come to need and love each other.

“The Life Ahead” is a sad and sweet story with both first rate leads in Madame R and Momo and the fully developed supporting characters. I remember seeing “Madame Rosa” back in the 70s and was taken by the story and, particularly, Simone Signoret’s fine performance. I feel the same way about Sophia Loren’s interpretation and her relationship with Momo.