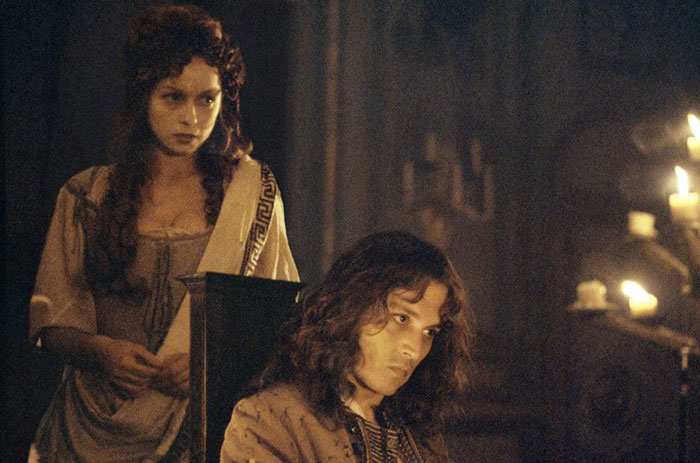 John Wilmot (Johnny Depp), also known, in the 17th Century, as the Earl of Rochester had the infamous reputation for excessive drink and even more excessive debauchery. He is the favored poet of King Charles II but his debased ways not only place him out of favor with his monarch, they also lead to his untimely death in “The Libertine.”

In the late 1600's, during King Charles II's (John Malkovich, "The Hitchhiker's Guide to the Galaxy," who played the lead role on stage) Restoration Era, a time when the arts and sciences began to flourish and liberty become more highly valued, one man pushed boundaries like no other. The wild life and writings of John Wilmot, a.k.a. the Earl of Rochester (Johnny Depp, "Charlie and the Chocolate Factory"), would forever brand him "The Libertine." In their respective feature directorial and screenwriting debuts, Laurence Dunmore and Stephen Jeffreys (adapting his stage play) have whipped up a cockeyed version of "Stage Beauty" starring a literary bad boy who rarely gets to mouth his own verse. 'You will not like me. And I do not want you to like me,' famously intones Johnny Depp, addressing the camera as another 'Johnny' altogether. And while Depp seems the obvious choice for this ribald role, this is the first performance he's let get away from him. Rochester suffers serious physical decline in the film's final goings, yet Depp does nothing to relate the effects of rotting teeth or the weakening of limbs. From its storytelling to its camerawork, "The Libertine" is a bit of a muddle. After Depp sets us up to meet a most dislikable character, Rochester reenters his circle after a banishment, presumably for disfavoring the King (although Wilmot was imprisoned for kidnapping the heiress, Elizabeth Malet (Rosamund Pike, "Pride & Prejudice"), who later married him). 'We pined for you Johnny,' he's told by George (Tom Hollander, "Pride & Prejudice"), a fellow writer who presumably likes him (and who wrote a play, "The Man of Mode," based on Wilmot). Jane (Kelly Reilly, "Pride & Prejudice," "Mrs. Henderson Presents"), his mistress/prostitute, reacts with scorn when told Wilmot's brought his wife to London ('bit of a waste, shooting good jism up the lawful'). The King himself seems happy to have Rochester back in court ('Elizabeth had her Shakespeare, you can be mine') and Wilmot makes another friend when he saves a theater actress, Elizabeth Barry (Samantha Morton, "In America"), from losing her job after a booed performance and begins to tutor her himself. But Barry is a most independent type ('You can buy my slit - you want power over me,' she accuses) and she will, it seems, be his undoing when he actually falls for her. Yet so much of the time it is not exactly clear what is really going on. Rather than illuminating Wilmot's life, particularly with regard to his writing, prior study of Rochester is almost necessary in order to make sense of some of the action. Some scenes are nicely handled - Wilmot's enjoyment of his wife's recounting of his thievery of her, the lush romantic score which presages his falling for Barry as he makes her repeat the same piece of dialogue until she owns it - but others are not. A visualization of Rochester's poem, “A Ramble in St James’s Park,” is made Wilmot's observation of Bosch-like orgies enshrouded in fog, unconnected to the singular woman he addressed in that poem and I was never clear on just what he was saving King Charles from in late goings (an attack on the right of succession of Charles's brother). In fact, this penultimate part of the film is ridiculous with Depp looking like a 17th century Michael Jackson in luxuriant black wig and false silver nose, prancing about while propped up on two sticks. We never learn what motivates him to taunt the King with a pornographic play featuring giant dildos put on for the French ambassador, an act which results in his second banishment. Dialogue is sometimes difficult to interpret (only repeated listening enabled me to determine that the fate Wilmot foretells Billy Downs (Rupert Friend, "Pride & Prejudice") would be brought by 'this circle' rather than 'discomfort'). Depp, who has stated that he believes Rochester was, in fact, the first punk rocker, trades his "Pirates'" impersonation of Keith Richards for Johnny Rotten's sneering disdain, but except for flashes of wit, his characterization does little to render Rochester's allure. I can imagine Depp was entertained by the notion of his character's literal rot, yet there is no sucking of teeth or impairment of motion to accompany it. Still, Depp has such screen presence, he's riveting until then, nonetheless. Better are Morton and Pike, who give the film far more than it gives them. Morton's intelligent manipulation of and vocal sparring with Depp's character make for some of the best scenes and Pike does much to provide an understanding of his wife's loyalty. Reilly is also good as the practical Jane. Very few of the supporting male characters have much of a chance to stand out, with the exception of Malkovich who cannot help do anything but. One exception is Richard Coyle ("Topsy-Turvy," BBC's "Coupling") as Wilmot's manservant, the aptly named Alcock. In an attempt to make their film down and dirty (a feat most successfully accomplished in 1982's "The Return of Martin Guerre" and more recently in this year's "Pride & Prejudice"), Dunmore and cinematographer Alexander Melman have mostly made it drab and murky. In concentrating on the Earl's love life ('They say men fall three times. 'A calf’s love, the one you marry and your deathbed bride'), Dunmore allows Rochester's most compelling talents - debauchery and probing poetry - to get lost in the shuffle.

The Libertine” starts off well enough with Rochester telling the camera, “You will not like me.” He then goes about proving his statement as he spirals into a morass of drunkenness and womanizing. But, what starts off interestingly enough soon deteriorates into a tepid potboiler that shows the errors of Wilmot’s ways and depicts the disease that will ravage his body until his early death. The result is one of those rare things: a Johnny Depp film that I could have done without. There are some good points to “The Libertine,” though they are few. The best thing in the film is the presence of Samantha Morton as Rochester’s mistress, Elizabeth Barry. Her performance is so strong as to appear to be in a different movie. John Malkovich, almost unrecognizable under all the makeup, also gives the film some credibility, though not nearly enough to recommend the film. Newcomer director Laurence Dunmore does not show the experience necessary to pull off this period piece and lets Depp’s performance fall by the wayside, but this could also be the fault of the screenplay by Stephen Jeffreys (adapted from his play). The story never builds sympathy for Wilmot, a problem since he is the central character. Techs are rough with murky lighting and unimaginative camerawork. Costume is okay but nothing outstanding. The copy of the film that I watched had the look of a work print – very rough - which is not a good thing. The Libertine” is the kind of bland filmmaking that doesn’t make me even suggest renting it, never mind wasting your time and money at the theater.