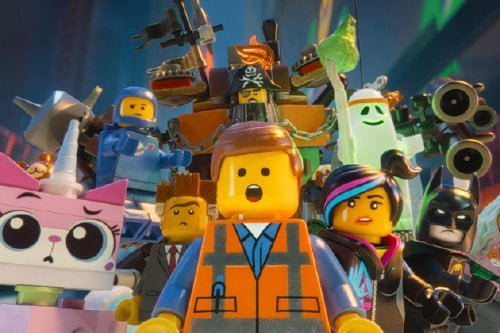 Emmet Brickowoski (Chris Pratt) is a regular LEGO guy who has no building skills but a great deal of enthusiasm. His world is in danger of being glued together by the evil Lord Business (Will Ferrell) and his monstrous Kragle The prophecy by LEGO wise man Vitruvio (Morgan Freeman) deigns that Emmet is the Special, Master Builder needed to stop the nefarious plans in “The LEGO Movie.”

Emmet Brickowoski (voice of Chris Pratt) is perpetually upbeat, a follower, not a leader, which is a good thing in Bricksburg, whose President Business (voice of Will Ferrell) demands conformity in all things, from the way construction workers like Emmet go about their morning routine, to the buildings Emmet razes and builds. One night at closing, Emmet's accidentally pushed aside and falls into an excavation where he spies an interloper further below. When she doesn't heed his cheerful warning, Emmet falls further, and finds something that will change the course of his life in "The Lego Movie." After the most uninspired year for American animated features in recent memory, 2014 starts off promisingly with writer/directors Phil Lord & Christopher Miller's (“Cloudy with a Chance of Meatballs,” “21 Jump Street”) stylish, inventive and funny ode to the world of Lego, a movie that actually creates hope for a franchise. This well crafted film features both established Lego characters (a 1980's spaceman, various superhero incarnations) and new (Emmet himself, Unikitty), but everything seen in the film is comprised of existing Lego pieces. The filmmakers went so far as to create their world block by scuffed and dented block. The film's basic plot is derived from a multitude of ideas, from Orwell's '1984' to the last episode of 'St. Elsewhere.' It is clear that Emmet's world is under the control of a 'Big Brother' who uses media and adherence to 'instructions' to keep his population synthetically happy and in line. But when Emmet meets the rule breaker who crashed his work place after dark, Wyldstyle (voice of Elizabeth Banks) informs him that she is one of a group of Master Builders who are searching for the 'Piece of Resistance' that will stop Business's plan to end the world on Taco Tuesday (one of Business's media campaigns to keep the populace happy) with his dastardly Kragle device. As Emmet happened to land on that Piece, which is now stuck to his back, Wyldstyle informs him that he is 'The Special' that is to lead their rebellion. A run-in with Business's henchman, Bad Cop/Good Cop (voice of Liam Neeson in a true dual performance) finds Emmet on the run with Wyldstyle, who's constructed a motorcycle out of pieces found in an alley. The Master Builders, you see, are the ones who do not follow 'instructions,' instead using their imagination to construct fabulous things. One such, Metal Beard (voice of Nick Offerman), even reconstructed himself when he lost his body and is now a pirate with a shark for one hand and a cannon for the other. Emmet meets these and others when Wyldstyle crashes through Bricksburg's city limits (shades of "The Truman Show"), taking Emmet to such places as the Old West, where he meets mystic wise man Vitruvius (voice of Morgan Freeman) posing as a blind piano player in a saloon, and Cloud Cuckoo Land, run by high strung Unikitty (voice of Alison Brie) who doesn't tolerate negativity or anger. But as the rebellion assembles, two things become clear - Vesuvius's prophecy about 'The Special' was entirely concocted from thin air and Emmet hasn't had an original thought in his life, his 'double decker couch' notwithstanding. Lord and Miller deliver wit both verbally and visually throughout the film, something in short supply since Pixar's glory days. Emmet 'brushes' his hair with an amusing edit, Wyldstyle 'swings' her cap of punk tresses. Even the vocal casting is humorous (Jonah Hill as 'Green Lantern,' Freeman's past filmography 'type,' Anthony Daniels and Billy Dee Williams reprising their Star Wars characters). The film's internal concepts all pay off with the metafiction's third act twist and the film's final punch line sets up a sequel that, for once, is welcome. The animation is so dense with ideas, the story so rapidly paced, repeat viewings are sure to be rewarded with more and more discoveries. The production is a technical marvel, the animators grounding everything, including character movement, within Lego constraints. And yet they've created an undulating ocean and a bad guy who can morph from media friendly CEO to towering super villain. Take *that* "Transformers!" In "The Lego Movie," everything is awesome.