The Legend of Pale Male 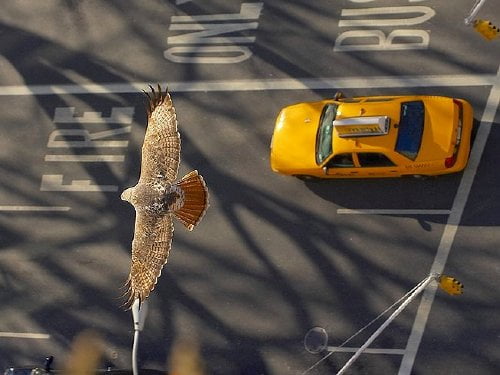 In 1993, a new resident landed on the prestigious Central Park West co-op at 927 Fifth Avenue, New York City. This newcomer did not move into the swanky building but onto it. The latest tenant is not human but the first red-tailed hawk to move back to the Big Apple in over 100 years. Belgian documentarian Frederic Lilien set out to film the magnificent raptor for one year but, nearly 20 years later, the filmmaker continues to document “The Legend of Pale Male.”

Frederic Lilien ran away from his Belgian family's law firm to live an aimless existence in New York City. One day in Central Park he encountered a Red-tailed hawk, a wild predator that had not made the city its home in over one hundred years. In 1993, Lilien vowed to film the bird for one year. Almost twenty years later, it had become the basis of his life as recounted in his documentary, "The Legend of Pale Male." Egotistical first time filmmaker Frederic Lilien would have us believe everything Red-tailed hawk Pale Male does is a personal message, but the real story gets told in spite of him and it's a wonder - beautiful, primitive, funny, tragic and ultimately hopeful. If only Lilien would let up on his autobiographical elements and silly anthropomorphic speculations. Still, it's a beautifully shot film with a lot of humor and heart and even factual plot twists that works not only on the level of its subject, but as a study of how societies form around shared experience and obsessions. Lilien's own story is a good jumping off point, even his inclusion of some of his original amateur video footage. He's helped by a number of people, particularly the selfless Charles who gifts him with the 500 mm lens which will enable his startling close ups. The first jaw dropping bit of footage we get is Pale Male (the hawk was named by Wall St. Journal nature writer Marie Winn) hunting pigeons, one of which he snatches mid air (there are a number of shots of the hawk with dead animals, so those who cannot stomach such things take note). The story is incredible. One day, Pale Male suddenly has a mate who is named First Love. He will have three more over the course of the story, each's demise a sad and different tale. We learn that their preferred mating spot is the balcony of Woody Allen's penthouse. A nest is built at 927 Fifth Avenue. People wait on tenterhooks at all hours to witness the hatching of chicks and their fledgling flights. Lucien's attempt to photograph one is an amusing series of mishaps. Then the condo association of 927 decides to suddenly dismantle the nest one day, residents tired of the birdwatchers in Central Park training binoculars and cameras in their direction. There is a mighty uproar, a protest supported by 927 resident Mary Tyler Moore. (For more detailed coverage of this aspect of the story, see the 2005 Vanity Fair article 'Ruffled Feathers on Fifth Avenue.') Lilien wraps his tale with a tragic aftermath that suddenly takes wing with spirit raising hope. "The Legend of Pale Male" is a terrific piece of work and great story in spite of the filmmaker's often wrong-headed instincts.

It is nature versus man in this stirring documentary and love story about one young hawk, named Pale Male by one of the thousands of birdwatchers who gather 100 yards to observe the handsome raptor, trying to make it in the big city. Their long-range telescopes and cameras are trained directly at the front of 927 Fifth Avenue and many of the tenants, who value their privacy, resent the intrusion by a gang of avian-watching Peeping Toms. When Pale Male finds a mate, dubbed First Love, they set up their nest in the protected façade over the building’s entry. First efforts by the co-op board of directors to get rid of the nest are kyboshed by the US Fish and Wildlife Service that designated the nest as protected. 20 years and several mates later, Pale Male is a phenomenon that still draws people from thousands of miles away who want to visually feast on the raptors’ lives. Their cameras capture the hawks living their wild existence in the middle of the busiest city in the world. The birds hunt and feed on pigeons and rats, much to the chagrin of the city’s pigeon lovers, mate (hawks are pretty randy creatures) and raise their babies, all to the delight of the dedicated watchers across the street. The watchers even have a long time proponent and fan of Pale Male living in the building – Mary Tyler Moore. Lilien’s cameras catch the beauty and grandeur of Pale Male, his mates and their babies, including the amazing close up view of a young hawk making its first flight. The power of the people is also shown as the hawk watchers stage a protest when PM’s nest is destroyed by order of the co-op board of directors. The uprising against this destruction is met with a city decree that the building tenants restore the nest site. A bigger and better nest is the result. “The Legend of Pale Male” is an uplifting documentary film, unique in its subject matter and locale, which grabs your attention and keeps it for the whole film. The photography is superior in its clarity and fluidity and is worth the price of admission alone.