The Law (aka Where the Hot Wind Blows) 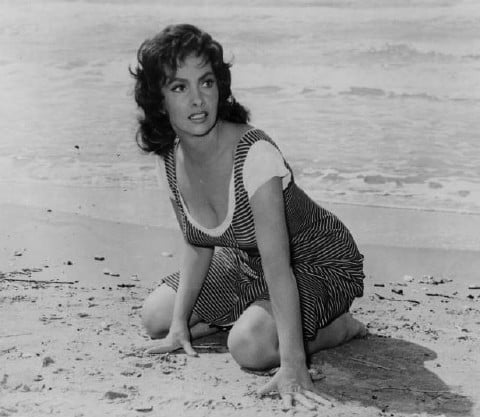 Maestro director Jules Dassin (“Rififi,” “Topkapi,” “Never On Sunday”) gets re-release treatment with his 1959 gem of a film about the a small Italian fishing village where passions abound. At its center is the ravishing Marietta (Gina Lollobridgida), servant of the town’s boss, Don Cesare (Pierre Brasseur), as she is romantically pursued by police inspector Attilio (Vittorio Caprioli), handsome engineer and outsider Enrico (Marcello Mastoianni) and criminal Matteo (Yves Montand). But, what it all comes down to in this sunny little town is the local drinking game called “The Law.”

Marietta (Gina Lollobrigida) is the most desired woman in the southern Italian fishing village of Porto Manacore. She works as a housekeeper for the aging Don Cesare (Pierre Brasseur, "Eyes Without a Face," "King of Hearts"), but when an engineer, Enrico Tosso (Marcello Mastroianni), comes into town to drain the marshes and asks to hire her she refuses. She's intent on marrying him instead, at least if she can outwit the group of men led by criminal element Matteo Brigante (Yves Montand, in a rare bad guy role) who decide every night who wields the power based on a card game called "The Law." Writer/director Jules Dassin ("Never on Sunday," "Topkapi") has created a weird hybrid of a movie. The 'romance' which drives Marietta is practically nonexistent, but it hardly matters when you've got Gina Lollobrigida at the peak of her powers and a town where no one is what they appear on the surface. "The Law" seems to have gone a little crazy in the heat, in a good way. We first meet Marietta by the power of her voice cascading from Don Cesare's balcony where she polishes his boots to the town square below where hangabouts complain about the pigeons on the ground and look skywards to the singing. Just who will get Marietta is the source of much speculation. Dassin's camera roves up and down and across the windows of the town, peeking in to introduce town players. There is the police inspector, Attilio (Vittorio Caprioli), who leaves his wife to dally with Giuseppina (Lidia Alfonsi,"Black Sabbath," "Life Is Beautiful") beneath the stairwell. There is the local judge, whose beautiful wife Donna Lucrezia (Dassin's wife, Melina Mercouri, "Never on Sunday") pauses on the stairs to allow the unseen lovers to break away before she makes her own way to her much young lover, Francesco Brigante (Raf Mattioli), son of Matteo. Like Marietta, Lucrezia is intent on escaping the town with a man. There's a group of young men who break out into song throughout the film, beginning with their assessment to Matteo that 'He's in charge!' The drama comes to a boil on the evening of a town dance which draws tourists. Marietta twirls through the crowd, catching men up in her shawl (even, mistakenly, the disapproving priest). She also takes the opportunity to rob a Swiss tourist of quite a lot of cash to use as her dowry. Meanwhile Matteo demonstrates 'the law' for Enrico, who watches in disgust as Don Cesare's manservant Tonio (Paolo Stoppa) is humiliated. Matteo may get his way often, but Marietta eludes. Dassin's film is stuffed with individual scenes which can practically stand on their own. In a wonderful early sequence, Marietta stands guard as a bunch of boys steal the inspector's motor bike by breaking it down into pieces, a literally winking homage to the bicycle thief. Later, she herds sheep through the surf as she flirts with Enrico. Don Cesare is seated like a king, with the Greek antiquities he's gathered over the years arranged behind him, beautiful mise-en-scène. Tension builds when Matteo challenges his son, on an outbound bus sitting a few seats before Lucrezia. Costume design is notable, with Marietta's early dress, stripes running vertically down the middle and horizontally at the sides, exaggerating her already voluptuous figure. Lollobrigida is a force of nature in this role, like a wild creature living amidst penned denizens. Montand is a revelation as Matteo, a right bastard, but (a very young)P Mastroianni strangely leaves little impression. Mercouri is a tragic figure, used goods past their expiration date but still appealing. Pierre Brasseur's Don is a godfather in more ways than one, surprisingly soft with the woman he's too old to have. "The Law" is being rereleased by Oscilloscope in a beautiful new 35 mm print (it was originally released in the U.S. with the title "Where the Hot Wind Blows"). It's an oddity, but one with many pleasures. It's one of the better films you've never heard of.

Now in her waning years, Harriet begins to question her life. She is alone, divorced and estranged from her daughter, Elizabeth (Anne Heche). Her life, until she retired, revolved around her advertising business. She built that business, against all odds, in a man’s world and ruled it with an iron fist. She made few friends and earned, because of her single-minded ambition, the animosity of those around her, especially her family. Harriet becomes obsessed with the obituaries of those she knew in life. She sees such glowing words as “beloved spouse” and “loved by all” about those recently deceased and knows they were not. She saunters down to a local newspaper she helped finance and demands that the editor, Robin (Thomas Sadoski), assign his obit writer, Ann (Amanda Seyfried), to the sole task of writing Harriet’s obituary. What follows is Ann researching and interviewing those hundreds who were a part of her life, including her ex-husband, Edward (Philip Baker Hall), hairdresser (Sarah Baker), gynecologist (Alanna Ubach) and her priest (John Billingsley). None has anything but bad to say about Harriet and Ann’s first cut at her pre-death obit is less than glowing. As a matter of fact, it is little better than “Harriet was born, she lived and she died.” This revelation sparks Harriet to push forward, change her life and do good for others. She takes on young Brenda (AnnJewel Lee Dixon), the foul mouthed kid, her “hoodlum,” she decides to mentor and help. Ann puts her on to a classic radio station where she takes her collection of vintage LPs and demands (and gets) a job as the morning DJ. There is more to happen as Harriet tries to rebuild the bridges she burned behind her over the years. There is nothing new and different in “The Last Word” and it relies, mainly, on MacLaine’s acerbic wit to carry the pace of the story. Amanda Seyfried, as Ann, plays second banana to Harriet and used to absorb Harriet’s inherent scorn. AnnJewel Lee Dixon, as sidekick Brenda, is amusing but is, as is most of the film, contrived to showcase the film’s star. “The Last Word” follows conventional lines and I have seen the story many times before. MacLaine is a delight to watch but she has done this character many times before. “Guarding Tess (1994)” is one that comes to mind. MacLaine, though, is amusing to watch.