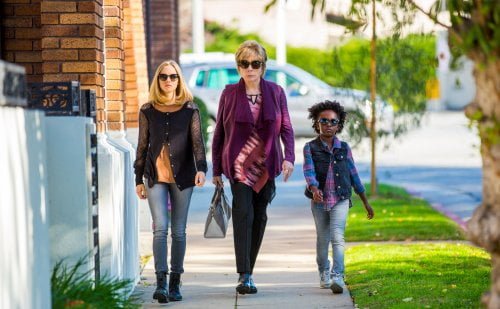 Harriet (Shirley MacLaine) has always been in control of all aspects of her life, but not so of late. The fateful knocking over of a glass of wine reveals the one way she can end things the way she wants: in her obituary, where she will have “The Last Word.”

80-something Harriet Lauler (Shirley MacLaine) was once her town's most notable businesswoman as the owner of an advertising firm, but her perfectionism drove away family and friends while her assertiveness drove her out of her own company. Spending days alone in her pristine home, all she has to do is to criticize her gardener (Gedde Watanabe, "Sixteen Candles"). One day she notices a laudatory obituary and marches down to the local newspaper demanding to meet its writer, but after Anne Sherman's (Amanda Seyfried) first draft proves lightweight, Harriet is determined to have "The Last Word." Watching Shirley MacLaine be a pill turns out to be more entertaining than a lot of what passes for comedy these days. Screenwriter Stuart Ross Fink had her in mind, so he may be forgiven if his and director Mark Pellington's ("The Mothman Prophecies," "Henry Poole Is Here") film hits preordained notes and occasional over indulgence. The film is about legacy, about how we wish to be perceived, but also about how preconceived notions limit our connections in life. When Harriet Lauler strides into the local newspaper, editor Ronald Odom (Tom Everett Scott, "An American Werewolf in Paris") goes on high alert. He's well aware of how difficult she can be but also how long her advertising kept the paper afloat. Her request to meet Anne cannot be denied and the flustered young woman is given a list of 200 people to interview for Harriet's obituary. But Anne cannot find anyone, not even Harriet's priest, willing to say something nice if they're willing to talk to her at all, so after receiving her meager draft, Harriet shows up at her apartment one night. Harriet's four point analysis of a 'good' obituary - to have been loved by family and friends, admired by your colleagues, to have touched someone's life and a wild card unique skill or experience - becomes the film's blueprint. Taking charge with Anne in tow, Harriet marches down to a community center where a young black girl, Brenda (newcomer Ann'Jewel Lee), gains her admiration for mouthing off to an administrator about the Dewey Decimal System. Anne, an aspiring writer with a lack of confidence, is surprised by how Harriet relates to these kids, imparting unconventional wisdom. When Anne visits Harriet's home, she geeks out over her vinyl record collection. When Harriet tells her the decline of the DJ has made her lose interest, Anne mentions KOXA. The next morning, Harriet marches into the station, her 'intern' Brenda wheeling in her records, and tells manager Robin Sands (Thomas Sadoski, TV's 'Life in Pieces') she's available for his early a.m. slot. He's astonished, until her obvious knowledge and shared love of The Kinks gets her on the airwaves. Two challenges down, two to go. Harriet doesn't suddenly change her stripes, but what Anne comes to realize is that her unfettered criticisms are actually meant to provoke self improvement. Being with Harriet gives her much to consider and she becomes a better writer under Harriet's harsh spotlight. In its third act, the film becomes a road movie, as Harriet seeks to reengage with her estranged daughter Elizabeth (Anne Heche, "Six Days Seven Nights," portraying a tart chip off the old block). The film meanders a bit here and Brenda's character never comes into sharp focus (young Lee lets some one-liners rip, but the actress's inexperience is evident). We are rewarded, though, when Harriet pays a visit to her ex, Edward (Philip Baker Hall, "Secret Honor"), previously consulted by Anne. In just a few minutes, MacLaine and Baker Hall convey years spent together and a still vibrant affection. Far more obvious but nonetheless amusing is Harriet's revenge on her old business partner. Pellington is to be commended for handling the film's climax just right, quietly, with little fuss. "The Last Word" may not be a great film, but MacLaine's performance is stellar. Grade:

Now in her waning years, Harriet begins to question her life. She is alone, divorced and estranged from her daughter, Elizabeth (Anne Heche). Her life, until she retired, revolved around her advertising business. She built that business, against all odds, in a man’s world and ruled it with an iron fist. She made few friends and earned, because of her single-minded ambition, the animosity of those around her, especially her family. Harriet becomes obsessed with the obituaries of those she knew in life. She sees such glowing words as “beloved spouse” and “loved by all” about those recently deceased and knows they were not. She saunters down to a local newspaper she helped finance and demands that the editor, Robin (Thomas Sadoski), assign his obit writer, Ann (Amanda Seyfried), to the sole task of writing Harriet’s obituary. What follows is Ann researching and interviewing those hundreds who were a part of her life, including her ex-husband, Edward (Philip Baker Hall), hairdresser (Sarah Baker), gynecologist (Alanna Ubach) and her priest (John Billingsley). None has anything but bad to say about Harriet and Ann’s first cut at her pre-death obit is less than glowing. As a matter of fact, it is little better than “Harriet was born, she lived and she died.” This revelation sparks Harriet to push forward, change her life and do good for others. She takes on young Brenda (AnnJewel Lee Dixon), the foul mouthed kid, her “hoodlum,” she decides to mentor and help. Ann puts her on to a classic radio station where she takes her collection of vintage LPs and demands (and gets) a job as the morning DJ. There is more to happen as Harriet tries to rebuild the bridges she burned behind her over the years. There is nothing new and different in “The Last Word” and it relies, mainly, on MacLaine’s acerbic wit to carry the pace of the story. Amanda Seyfried, as Ann, plays second banana to Harriet and used to absorb Harriet’s inherent scorn. AnnJewel Lee Dixon, as sidekick Brenda, is amusing but is, as is most of the film, contrived to showcase the film’s star. “The Last Word” follows conventional lines and I have seen the story many times before. MacLaine is a delight to watch but she has done this character many times before. “Guarding Tess (1994)” is one that comes to mind. MacLaine, though, is amusing to watch.