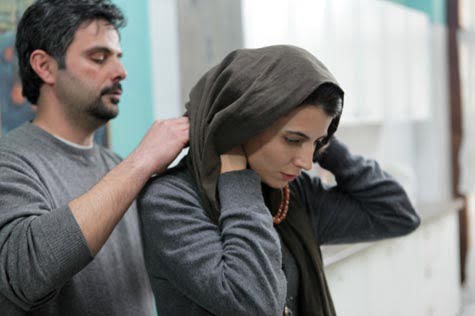 'I cannot even recall your face. It's as if you never existed.' says a gorgeous young woman, having trouble suppressing laughter, like an actress muffing her lines. We then meet Koshrow (writer/director Ali Mosaffa) who tells us that he is dead and that he will show us how that came to be and, just like with William Holden in "Sunset Boulevard," both a love triangle and the movies are involved. That woman is Leili (Mosaffa's wife Leila Hatami, "A Separation") and she is indeed an actress and Koshrow has always felt diminished as her husband, just as he did as an architect when he built their house and misengineered "The Last Step."

"The Last Step" has quite a bit in common with its star Hatami's most famous movi, the 2012 Oscar winner "A Separation." Like that film, this one involves a marriage under duress and events not always being what they appear. One character even has a parent suffering from Alzheimer's and the film's central event involves a character falling down stairs. But Mosaffa's film is stylistically very different from Farhadi's, unfolding in a non-linear fashion which can become confusing to those who aren't paying the strictest of attention. While Mosaffa's transitions from one scene or time to another are elegant in their cutting and sound design, he's not always as successful from a story telling perspective. We soon learn that Leili is having trouble with her lines just twenty days after the death of her husband, a point which makes her uncontrollable laughter disturbing. When we visit that day, Dr. Amin (Alireza Aghakhani) tells her that her husband had a bruise on his head that existed before his fall down their stairs. We see Koshrow with his skateboard, an accident waiting to happen, look at himself in a mirror and say 'dead man walking.' What does this all mean? Well, everything keeps folding back on itself, revealing more and more. Amin is not just a doctor, but a close family friend, one whom Koshrow eyes with suspicion as regards his wife. And Amin is complicit in his fate, but not in the way we might expect. Then there's the past, in a different place, where Leili's grandmother lived and she loved a young boy, a love Koshrow had never been able to live up to. But watch how Leili always requests a different kind of sugar at a cafe that never has it and think about how that relates to her relationship with these men. Throughout the film we see snippets of the film Leili, (who, coincidentally looks remarkably like Isabella Rossellini here) is making and that also provides clues. Her director probes for information, telling her that if he understands het, he can adapt his film to suit her. Mosaffa informs us that his film is based on both Tolstoy’s novella 'The Death of Ivan Ilyich' and James Joyce’s 'The Dead,' but, like "A Separation," it has a lot to say about the state of marriage in Iran today. His screenplay is ambitious, perhaps too much so, sometimes seeming almost illusory. But "The Last Step" is also haunting, delving into memory like a puzzle which will always have a missing piece.