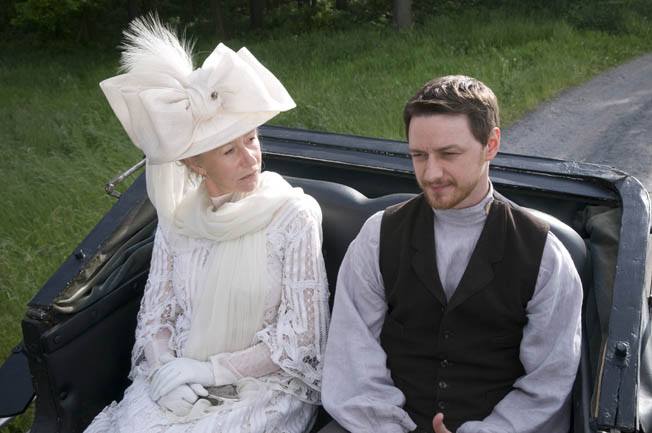 When young Tolstoyan Valentin Bulgakov (James McAvoy, "Atonement") is recruited to be the great writer's assistant by Tolstoy's Vladimir Chertkov (Paul Giamatti, "Sideways," "Cold Souls"), Chertkov warns him that he must keep note of everything that happens, particularly in regards to copyrights, because Tolstoy's wife, the Countess Sofya (Helen Mirren, "The Queen") is dangerous. And so Valentin finds himself caught between Tolstoy's movement and life partners, a place where Tolstoy (Christopher Plummer, "Up," "The Imaginarium of Doctor Parnassus") also resides, before, in a last ditch attempt to shed himself of worldly possessions, he flees to "The Last Station."

Writer/director Michael Hoffman ("Restoration," "Game 6") has taken on the puritanical Tolstoyan movement and the author's late marital conflict and turned the material into a surprisingly fun film. Sergei Yevtushenko's ("Russian Ark") score acts as the film's barometer - surprisingly playful well into the film, watch out when it becomes dramatically cliched as this is where Hoffman loses his tone. Still, "The Last Station" will not only tell most members of the audience way more than they ever knew about the Russian author but entertains throughout with Helen Mirren's feisty, funny turn. Acting as our point of view into the story, McAvoy's role here is much like his last in "Wanted" - he is inducted into a society that at first awes him then turns out to be very different on the inside than it had appeared, where the powerful man who welcomes him turns out to be his foe and where his supposed foe is anything but, and where a seductress tips the scales. Valentin is overjoyed with his new post and is seemingly oblivious to the sarcasm that greets his enthusiasm. Arriving at the Tolstoyan compound at Rossosh, Valentine is offered no sustenance, shown to a spare wooden room and told that he must rise at dawn to travel to Tolstoy's house. The next day, Masha (Kerry Condon, "Intermission," HBO's "Rome") serves the virginal lad tea, making him clearly uncomfortable. He's perhaps made even more so when he arrives at Tolstoy's elaborate manor home, outfitted in luxury and surrounded by beautifully tended landscapes. Tolstoy himself dresses like a monk and admits to being less of a Tolstoyan than its followers, but it is Sofya who objects his anarchist disbelief in property rights. Before he knows what's hit him, Valentin has become Mascha's lover and Sofya's staunchest defender. "The Last Station" is the type of film the old Weinstein Miramax used to excel in distributing, an intelligent, adult piece of entertainment. The film's title gives no indication of just how much fun it is, at least until the action moves to that titular place and turns too deadly serious. Mirren is a delight a the beloved wife nonetheless at war with her husband over his political beliefs and the opposition of his partner Chertkov. When she is not scheming politically (Valentin is taken into her confidence, made to sympathize, then asked to write everything that happens in Chertkov's presence in his diary!), she is playing the seductress, trying to tempt Tolstoy into their old way of life, and "The Last Station's" seduction scene is one of the funniest, most unique in film history ('Cockledoo!' indeed). Mirren is not only funny (her morning after scene is a bawdier version of Scarlett O'Hara's post-rape self satisfaction), she makes us feel her pain, and here we learn how instrumental she was in editing Tolstoy's magnum opus, "War and Peace." Plummer is a jovial Tolstoy, whose amusement at Valentin's initially strict adherence to Tolstoyan tenets is only slightly at odds with his final actions. The performance feels more rooted in Hoffman's filmic tone than in history. Giamatti, though, does little with the role of Chertkov and seems to be in a general decline of late. McAvoy is a delight as innocence corrupted and is a welcome guide into the action. (The actor's wife, Anne-Marie Duff ("Is Anybody There?"), who co-starred with him in the first season of BBCA's 'Shameless,' plays Tolstoy daughter Sasha.) Hoffman wraps his film in a altogether too conventional manner, given what has come before, downshifting gracelessly, but the journey to "The Last Station" is often as jolly as a sleigh ride in Woody Allen's "Love and Death."

In his last years, author Leo Tolstoy (Christopher Plummer) struggled between the wealth and fame his works brought him and his desire to live an aesthetic life for the people of Russia. His wife and muse Countess Sofya (Helen Mirren), though, sees this struggle as the loss of her family’s wealth and social position and she contests his new will that will give away his fortune in “The Last Station.” The vision of writer/director Michael Hoffman (adapting the Jay Parini novel) brings us to the time when Tolstoy was at his peak in both writing and political activism. This slice of Tolstoy’s life is seen through the eyes of chronicler and double spy (though not willingly), Valentin Bulgakov (James McAvoy), hired to follow the great author and write down his every word. This straightforward job is made complicated when, soon after his arrival, he is approached by Sofya to spy on Leo – and write everything down. (The writing things down stuff is done more than several times. When Sofya blows up at one of the scribes for his scribbling, I was on her side. This small and personal film explores the final days of a great literary figure and the rift that grew between him and his wife. In his mind, she went from muse to shrew and he abhors her screams that he owes her – big time. Mirren can be shrill at times but the actress conveys the characters frustration that she is about to lose all that she worked so hard for, supporting Leo when he was a destitute writer. Christopher Plummer plays Tolstoy with acerbic wit and intelligence. Old may he be, but he is still a powerhouse of a man. McAvoy, on the other hand is a bland cipher overwhelmed by the dynamic characters around him. Hoffman gets good performances from his cast, stages the period lushly and lenser Sebastian Edschmid gives the film the right tone. The script falls a little flat but all those hordes of Leo Tolstoy fans out there will have a hoot.