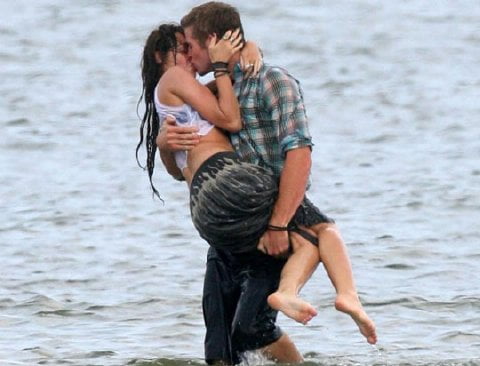 Seventeen year-old Ronnie Miller (Miley Cyrus) is a child piano prodigy who hasn't played since her father left three years prior. The sullen seventeen year-old isn't happy when her mom (Kelly Preston, "Old Dogs") drops her and little bro' Jonah (Bobby Coleman, "Martian Child," perhaps cast as a 'lip match' to Miley) off to spend the summer with their dad (Greg Kinnear) at his home on a Georgia beach. Sporting black boots and a pierced nose, Ronnie gets looks from the bronzed blondes on the beach, but connects with the like-minded Blaze (Carly Chaikin) and her fireball juggling boyfriend Marcus (Nick Lashaway) and resists the attentions of a blond volleyball playing hunk, Will (Liam Hemsworth, "Knowing"). But Will keeps crossing her path and eventually wins her over as the aquarium volunteer who responds to her call about an endangered sea turtle's nest in "The Last Song."

Miley Cyrus takes one step away from her squeaky clean Hannah Montana character while keeping one foot on safe ground as the singing, piano-playing Ronnie in the first Nicholas Sparks adaptation to be written by the author himself (with prior collaborator Jeff Van Wie), and although I often find the teen's persona annoying, I have to admit she does a solid job here, albeit pretty much playing a version of herself. What is more surprising is that "The Last Song" turns out to be the second best adaptation of Sparks' particular brand of goody-two-shoed love stories where the protagonists are separated across class boundaries preferably near a southeastern seashore where stacks of letters go unread and someone important is destined to die. It's about on a par with the Mandy Moore starring "A Walk to Remember" ("The Notebook," of course, retains the crown), which is the movie Cyrus cited as the type she wanted to be in. Sparks delivered, crafting the role for her out of his remnants bag. Ronnie spends her first night with dad out on the beach beneath a pier observing her new found friends boozing (she doesn't drink, of course). She returns home in the wee hours after fending off unwanted advances from Marcus. Dad is playing one of his original compositions and Cyrus has a nice moment on the stairs as Ronnie allows herself to experience the joy of the music. But Ronnie holds out against dad, even as his young son bonds as they create a stained glass window for the historic church which was recently destroyed by fire. Ronnie will later find out local opinion has pegged her dad as the arsonist, for no reason other than that he was pulled out, unconscious, from the blaze. In a parallel story line, Ronnie, who has shoplifting on her record from New York, is set up by Blaze in a local shop, and so father and daughter share locally soiled reputations. This doesn't stop Will, who has been smitten since spilling Ronnie's milkshake on her that first day on the beach. Ronnie eventually falls for him only to learn that despite the job as an auto mechanic, he's about the richest kid in town, when he takes her to his 'What is this, Graceland?' home. It is here that Ronnie breaks down and plays piano for the first time in years, although she still resists her Juilliard scholarship long after spiting dad seems reasonable. Will's sister's society wedding provides a backdrop for Ronnie to prove her goodness by helping Blaze, not just once, but twice (note that name, ahem). Then the hatching of those sea turtles provide a symbolic circle of life link. After a decade of directing such television shows as "Grey's Anatomy" and "Big Love," Julie Anne Robinson has a firm hand on the rudder, keeping Sparks' more treacly aspects at bay, at least until the floodgates open for the film's weepie ending. The production is solid, no television roots peaking out, and Robinson's gotten good performances from her cast. Cyrus seems natural and Kinnear is really quite good here as a patient dad using humor as an equalizer. Hemsworth's a good looking guy and is an empathetic character and Carly Chaikin does a convincing type. Bobby Coleman is a little over eager as Jonah, the one performance that could have been reined in a bit. Nobody goes to a Nicholas Sparks movie for subtlety or originality. That said, "The Last Song" is surprisingly easy to sit through with a minimum of eye rolling. The real test for Cyrus, though, now that she has convinced as a 'real' teenager is to convince as someone a little more different from herself.