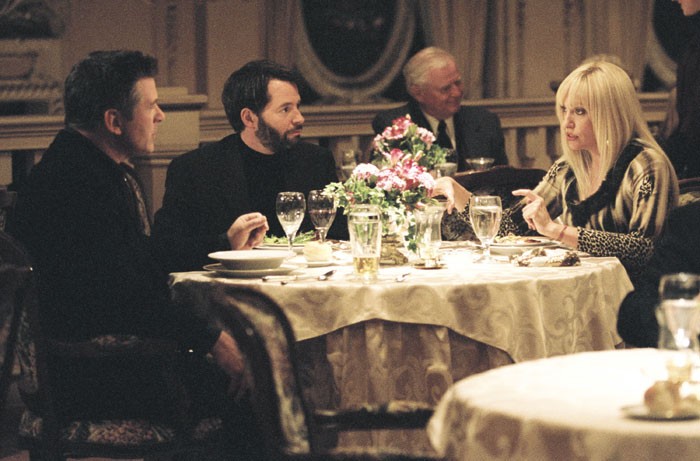 Steven Schats (Matthew Broderick) is a wannabe filmmaker who has yet to make a movie. He has been bicycling his screenplay (written with his brother Martin Paris (Tim Blake Nelson)) around town for years to anyone showing even a modicum of interest and jumps at the offer by producer Joe Devine (Alec Baldwin) to, finally, make his flick. What Steve doesn’t know is that Joe is an undercover FBI agent running a mob sting to trap the infamous John Gotti in “The Last Shot.”

The Last Shot” is based on the 1992 true-life article by Steve Fishman about two ambitious filmmakers, Gary Levy and Dan Lewk, and their unwitting part in an FBI undercover operation to break the Mob hold on the Teamsters union. Writer and first time director Jeff Nathanson took this unbelievable story of ambition, naivety and deception and brings it to the screen with an amazing collection of talented actors. Besides first among equals Broderick and Baldwin, Toni Collette vamps her way through as a former star, Emily French, trying to make a comeback; Tony Shalhoub plays Tommy “The Black” Sanz, a mobster running a bribery scam with the Teamsters who has ambitions to rise up in the Mafia ranks; Calista Flockhart is Steven’s actress/girlfriend Valerie who expects to be the star of the film; Tim Blake Nelson is Schats brother, Marshal Paris (his pen name). Buck Henry, as the budding filmmaker’s agent, Lonnie Bosco, and Ray Liotta as FBI chief and Joe’s much more successful brother, Jack Devine, round out the ensemble.

Steve is self-possessed and desperate enough to overlook the fact that his new producer doesn’t seem to know a thing about making movies but balks when Joe tries to change everything he has dreamed of doing. First, Joe insists that the movie, set in the wilds of Arizona and the Colorado River, be shot in Providence, Rhode Island (a hotbed of mob activity). Other restrictions on Steve’s auteur spirit start to intrude as Joe demands that Steven use a storage locker for an Indian shaman ritual and have a garbage dump stand in for a southwest US village.

Things perk up when Joe starts to actually believe that they can, indeed, make a movie that will trap Tommy Sanz. Devine envisions an FBI production company making movies around the country, wherever mobsters hang their hats, busting them and getting good box office, too.

The cast is an embarrassment of acting riches that, despite the novice helmer, give at least some dimension to their characters. Alec Baldwin fares best as ambitious, but not overly bright, Joe Devine. Broderick is serviceable as the naïve filmmaker whose biggest thrill is picking out the bullhorn he will use to say, “Action!” and “That’s a wrap!” Toni Collette, one heck of an actress, vamps it up as movie star, Emily. Calista Flockart gets good mileage out of her Valerie, an on-the-verge-of–a-nervous-breakdown actress with a penchant for high drama. Tony Shalhoub gives a menacing/amusing perf as mobster Sanz. The rest of the cast make their own small mark, particularly Joan Cusack as a Hollywood producer and FBI-adviser. Supporting cast is richly populated, if under utilized.

The Last Shot” takes the premise of the true-life story, keeps that part pretty much intact, and extrapolates it into fully developed characters and layers a dose of comedy on top. There are no real surprises to the film and I think a more deft hand at the helm would have helped things appreciably. But, Nathanson and company do a solid job, thanks to the large and talented cast, to bring things to an amusing and upbeat ending.