The Last of Robin Hood 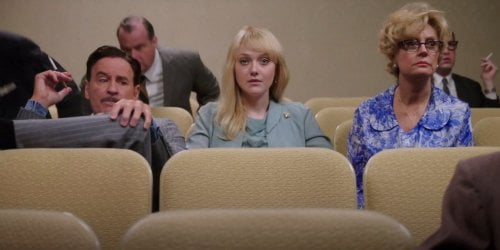 Errol Flynn (Kevin Kline) was one of the legendary movie stars of the 1930s and 40s but, after the war ended, filmgoers turned away from Hollywood spectacles and the actor turned to alcohol and drugs. In 1957, he met and seduced Beverly Aadland (Dakota Fanning), an aspiring (and under age) young actress, and they began an affair, under the eye of her mother Florence (Susan Sarandon, until the end of “The Last of Robin Hood.”

In his late forties, Hollywood star Errol Flynn (Kevin Kline) wasn't as big as he once was, his image tainted by statuary rape charges. But to stage mother Florence Aadland (Susan Sarandon), living vicariously through her fifteen year old daughter Beverly (Dakota Fanning, "The Twilight Saga: Eclipse," "Night Moves"), he looks like a ticket to the big time, even if she's turning a blind eye to just what's going on as her Bev gets first billing in "The Last of Robin Hood." If one didn't know better, one would think writer/directors Richard Glatzer & Wash Westmoreland ("Quinceañera") were first time filmmakers. The duo have a nose for a great story with multiple themes - the lure of tinseltown, child exploitation, media sensationalism and perhaps even true love - but aside from what often feels like a sugar-coated adaptation, the shoddy production they've constructed around their stars undermines a remarkable performance from Kline, who so slips into Flynn's skin one forgets one is watching an actor playing an actor. The film follows the usual biopic format of beginning at just about the end, as swarms of journalists and her mother await the arrival of Beverly Aadland's plane from Vancouver, where Flynn died 'in her arms,' before flashing back to two years ealier. Beverly, who's in the chorus line of a Gene Kelly movie ("Marjorie Morningstar," although it's never mentioned), catches Flynn's eye as she walks across the lot and he sends his assistant, Orry (Bryan Batt, 'Mad Men's' Sal), to fetch her. Initially charmed by the attention, Beverly arrives home later, shellshocked at having landed on the casting couch. But Flynn persists, dubbing the young girl Woodsey, and the two begin an illicit affair. When Errol's driver Ronnie (Matt Kane) recognizes her as having been two grades behind him at Hollywood High, he alerts his boss to her real age, but Errol will not be dissuaded and begins a charm attack on Flo before blaming her for conspiring to sell her daughter as an adult. Their collusion results in the end of Flo's marriage. And with that last turn of events, the film really begins to wobble. We learn that Flo had once been an aspiring dancer, but lost a leg in a car accident when her husband Herb (Patrick St. Esprit, "Draft Day") was driving drunk. And yet all we see of the man is his outrage over his wife's desire to take their daughter to NYC with Flynn. He calls the man 'a walking penis,' then tells her to go ahead, but that he'll be washing his hands of the both of them. Exit dad, with no idea of who he really was or how his disappearance affected his family, other than financially. We follow Flynn's physical and professional decline while he apparently tries to do right by Woodsey, flying her to Africa to end up cut out of a John Huston film, losing a bid to star in Kubrick's "Lolita" when he insists she be part of the deal, writing a lead role for her in "Cuban Rebel Girls" (in which she's awful) and dictating his will to her while on location. On Bev's 17th birthday, Errol announces she will be the fourth and final Mrs. Flynn, but his time runs out and Beverly and her mother become tabloid fodder, Flo attempting to use even that as a career boost for Bev. (She also collaborated on a book, 'The Big Love,' against her daughter's wishes.) Kline is so good here, it's a shame almost everything else about the film fails. He ably captures Flynn's allure, shading him with the filmmakers' allusions to Nabokov's Humbert Humbert. Sarandon's OK, although she never digs much below the surface of the alcoholic hanger-on. Fanning's simply awful, mistaking blandness for inexperience. We never understand how she really feels. Bev is a pawn in an adult game and we don't know whether ambition or love drives her actions. Glatzer and Westmoreland have stated that they intended to give their film the look of 1950's Technicolor, but instead it looks flat and overlit. Period details are often incorrect (note that Flo's phone is a 1970's model). "The Last of Robin Hood" is almost worth viewing for Kline's performance, but although it offers some tantalizing details about the late actor's last days, one comes away feeling that the real story lies somewhere in between the movie's depiction of the Aadlands and its own portrayal of the media's.

Writer-director team Richard Glatzer and Wash Westmoreland bring us a fictional account (with factual events interspersed) of the last two years in the life of Errol Flynn. The feel of “The Last of Robin Hood” is that of a made for TV docudrama, with two exceptions – Kevin Kline as Flynn and, to a lesser degree, Susan Sarandon as Beverly’s Hollywood obsessed mother. At times you can see Errol Flynn emerge as Kevin Kline disappears into his character while Sarandon has a blank canvas and creates her own turn as the penultimate Hollywood mom. Dakota Fanning, unfortunately, does nothing for her character, Beverly, who becomes the object of Flynn’s eye and readily seduces her. The production tries to give appropriate period feel but it fails in some noticeable details, like modular jack telephones and DC3 airplanes. Techs are okay but the reason to see “The Last of Robin Hood” is a spot on performance by Kevin Kline as the aged icon.