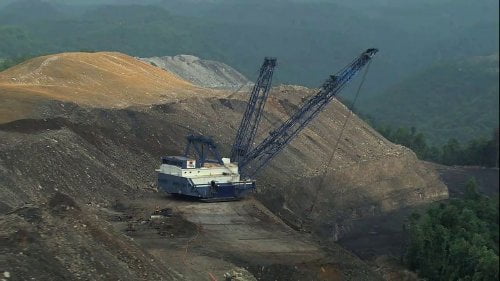 Half of the energy produced in the United States is fired from coal. One-third of that coal is mined in the Appalachian region of West Virginia. One company, Massey Energy, rules the mining industry in the area and the method used to get the coal is called “mountain top removal.” But the residents of the Coal River valley see, smell, taste and hear this encroaching destruction and must act if they are to save “The Last Mountain.”

"The Last Mountain" is another environmental documentary blasting big business for greedy, destructive practices which destroy human lives and the world they live in, but it's not as successful as, say, Josh Fox's "Gasland." Haney has an obvious subject here - there is no denying the depressing sight of stripped and leveled mountains or staggering statistics on brain cancer incidence or the fact that Massey's only paid 1% of the fines incurred on *60,000* violations - but once director Haney begins to include Robert Kennedy Jr. in his film he can't seem to stop and the film begins to seem more like a campaign piece than what he set out to do. Still, "The Last Mountain" is another worthy and troubling entry in this documentary subgenre.

This is an angry documentary, by Bill Haney, about the exploitation of the environment by a greedy corporation, here in the guise of Don Blankenship, CEO of Massey. Blackenship uses political influence and government bureaucracy to circumvent environmental laws, literally rape the land and garner enormous profits in the process. Mountain top removal is, according to the CEO, is the “cheapest and most efficient” way to mine the coal that is so vital to the nation’s energy needs. There is massive destruction when 800 to 900 ft of the top of a mountain is blasted into rubble and the coal ripped from the land. The denizens of the small village at the base of Coal Mountain have seen the results of mountain top removal in the neighboring areas. The mining operations, once the basting is done, use the local water supply to “wash” the coal before it is shipped. The result is a 2+ billion gallon toxic sludge lake that forced the depopulation of six communities. Basically, companies like Massey destroy mountains and, in the process, poison the environment. Left unchecked, tens of millions of people could be affected by the pollutants created by this mining method. After Haney sets the stage for his document, he introduces a staunch defender of the environment, Robert F. Kennedy Jr., the son of RFK and nephew of JFK and Ted Kennedy. RFK Jr. has been a long time conservationist and his inclusion in the documentary, too much to me, helps give “The Last Mountain” a name and pedigree to boost its message. The title could have been “RFK Jr. and the Last Mountain” because of this lop-sided attention toward Kennedy. However, there is a wealth of other information, including interviews with the local residents of Coal Mountain, some of whom are incredibly articulate and knowledgeable about the dangers they face from the mines, and often gut-wrenching statistics about the coal industry. It is a David versus Goliath battle where the bad guy, Massey Energy, has deep pockets that allows the company to absorb the over 60000 EPA violations issued over eight years. Paying the fines is a whole lot cheaper than fixing the destruction wrought upon the land and the people. The company claims that, after harvesting the coal, they put the mountain back to its original state. This is, of course, a joke, and the joke is on us. Bill Haney wears his angry heart on his sleeve with a film about the environment and its destruction through greed. There is hope, he says, in replacing coal power with wind power in an environment-friendly way. Things like interfering with bird migration paths and other potential downsides to wind power are glossed over but, otherwise, the filmmaker does help to open our eyes.