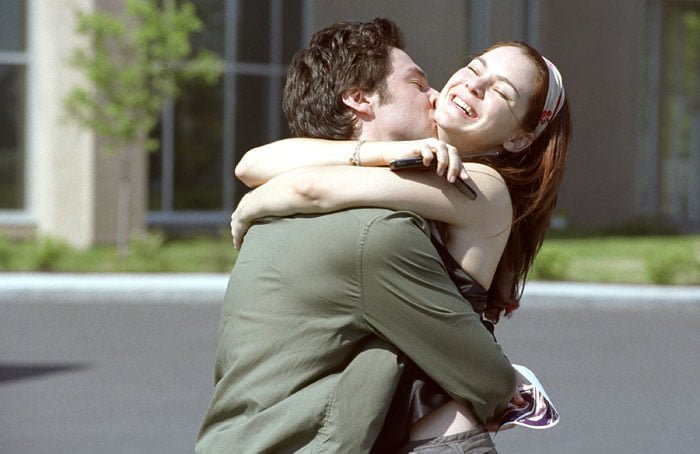 30-year old Michael (Zach Braff) seems to have it all: a beautiful, progressive-thinking girlfriend, Jenna (Jacinda Barrett), and a fast-track architectural career. But, he is having doubts about this good life and his eye wanders to a comely young co-ed (Rachel Bilson) in “The Last Kiss.”

Actor Tony Goldwyn once again gets behind the camera, this time to remake the 2001 Italian film of the same title (directed by Gabriele Muccino). The question I have: Is this remake necessary? My answer is: no. The updated screenplay, by Paul Haggis, is a collection of crises – life crisis as Michael sees his future as becoming one without anything new to experience; age crisis as Jenna’s mother, Anna (Blythe Danner), faces the indifference of her husband (Tom Wilkinson); marital crisis as Michael’s friend, Chris (Casey Affleck), struggles over leaving his wife and newborn child; and, everyone else in Michael’s life seems in the throes of some crisis or other. There is nothing more to “The Last Kiss” than the resolution of these problems, good or bad. There is little complexity to these resolutions. As such, I can give no emotional shrift to the several stories it contains. Zach Braff made a big splash as director/writer/star of debut film, “Garden State,” but does little, as the lead in “The Last Kiss,” to get me on Michael’s side. He is a shallow character that complains about being manipulated by his life circumstance but does little to fix things other than to screw up. The angst-ridden resolution to his foul up lasts far too long and made me just want the ending to be over with. Blythe Danner and Tom Wilkinson deliver their usual acting skills but both suffer from Goldwyn’s wooden directing and Haggis’s by the numbers script. Jacinda Barrett and Rachel Bilson are attractive additions to “The Last Kiss” but both are more object than subject. The Last Kiss” is the kind of film fodder best left to DVD rental, a far more economical prospect than taking it in on a Saturday night at the local multiplex. You’ll have enough cash left to order a pizza, too.