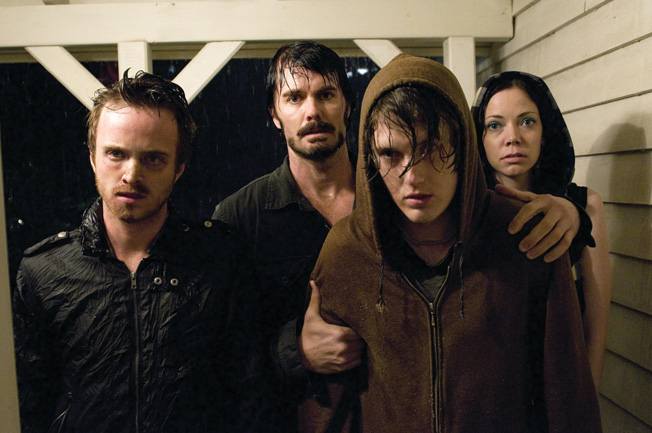 Swimming champ Mari Collingwood (Sara Paxton, "Aquamarine," "Sydney White") meets up with her wilder-living buddy Paige (Martha MacIsaac, "Superbad") on her first night at her family's summer home one year after losing her brother. Paige's quest for pot hooks the two up with Justin (Spencer Treat Clark, "Gladiator," "Mystic River"), a shy kid residing in an awfully run down looking motel. Justin may be OK, but his father, Krug (Garret Dillahunt, "No Country for Old Men"), is a viscous escaped con on the run with his sociopathic girlfriend Sadie (Riki Lindhome, "Million Dollar Baby," "Changeling") and his equally nasty brother Francis (Aaron Paul, a dialed-down Ben Foster, AMC's "Breaking Bad"). Once this gang has brutalized the two teenagers, leaving Mari for dead, they find shelter for the night at "The Last House on the Left."

Finally. After enduring the defilement that was "The Texas Chainsaw Massacre" remake and the utter mediocrity of the "Friday the 13th" reboot, Greek director Dennis Iliadis ("Hardcore") gets it. Wes Craven's debut film was considered quite shocking back in 1972, but it was really a poorly executed good idea, a remake of Bergman's "The Virgin Spring" raging against the inhumanity of the Vietnam War that was tonally warped, a bit of drive-in drivel. In comparison, Ililadis's remake is like the difference between Rob Zombie's "House of 1000 Corpses" and "The Devil's Rejects" - times ten. (And I use "The Devil's Rejects" reference purposefully, as it contains several nods to the original "Last House" while the remake nods back to "Rejects.") Screenwriters Adam Alleca and Carl Ellsworth ("Red Eye," "Disturbia") have smartly updated the tale (the rebellious Mary of the original is now the closer-to-mom athletic Mari of upper middle class; an added back story of a lost son gives more psychological heft to the violent rage that takes hold of the Collingwoods; the Keystone cops have been jettisoned and Krug's family no longer feel like they've wandered out of a John Waters movie) while still hewing pretty closely to the original. The filmmakers have injected tons of tension and suspense with two small changes - Krug's son no longer lures the girls to his father but is caught with them, adding depth to both Krug's and the Collingwoods's family dynamics, and the killers take a whole lot longer to realize they are in the home of one of their victims in the film's far superior final chapter. Craven referred back to Bergman with his use of the lakeside setting, but Iliadis takes it further, implying Mari's virginity in one of Krug's lines. Here the lake is also a potential savior and its pairing with unwelcome guests makes the 2009 "Last House" a flip side to "Funny Games." Transporting the city apartment segment to a rural run down motel evokes "Rejects" and kick starts a sense of dread just by the sight of it. It also establishes the class conflict between the two families. Iliadis know how to unsettle his audience with things like literal blood money and Sadie's casual nudity. The violence in the film is brutal. Every punch or kick is felt. The irony of John Collingwood's (Tony Goldwyn, "Abandon," "The Last Samurai") profession as a surgeon is explored more. The over-the-top cheesiness of Mary's parents' revenge upon her killers is replaced by some horrific, well-executed gore. Only the film's final coda should evoke some tension-relieving titters, the chainsaw replaced by a foreshadowed broken appliance. Emma's 'seduction' of Krug's brother is a lot more subtle and Monica Potter ("Head Over Heels," "Saw") draws out the dance beautifully. This is the better acted film by leaps and bounds. The production is also arresting, from "Mean Creek" cinematographer Sharone Meir's beautiful work (great closeup framing), to the terrific editing work of Peter McNulty ("X-Men," "The Assassination of Jesse James by the Coward Robert Ford"). 1972's prophetic song, "The Road Leads to Nowhere," has been replaced by a sign declaring 'Lake ends in the road' and a very imaginative score featuring tinkling bells and heavy synth sounds. The sound was a bit muffled, which may have been a projection issue or may have been a paean to 70's low budget filmmaking. The home, built on site in South Africa, is much better suited to both the Collingwoods' economic status and the events which take place in it, than the original's small ranch. Apparently, Michael Bay has hooked his star to the wrong European director for his remake series. They may be jumping on the horror remake bandwagon, but Craven and his original producing partner Sean Cunningham (who also paired with Bay for his own "13th" update) have proven here that they are less about crass commercialism and more about doing right by their material. Dennis Iliadis's "The Last House on the Left" is the real deal.