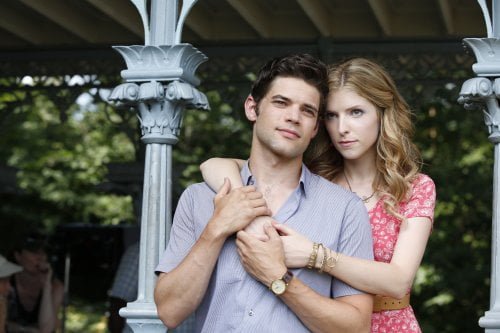 Adapting Jason Robert Brown's Off Broadway musical, writer/director Richard LaGravenese ("P.S. I Love You") has fashioned a series of compellingly performed musical numbers hanging off of a hit-and-miss backwards/forwards structure and a romance that's more sexual attraction than emotional intimacy. The ever reliable Kendrick kicks the film off as the epitome of a broken heart, her face almost gray with misery, but it's Jordan who's the surprise here, giving a strong performance as the shooting star novelist surrounded by temptation. The film, which features minimal spoken dialogue, is essentially a two-hander with extras acting as backup dancers and non-speaking support. The camera tracks into a brownstone, finding Cathy singing 'Jamie is over,' before flipping over to an exuberant foreplay number sung by Jamie as he revels in the 'Shiksa goddess' who will 'break his mother's heart' while he dances among the list of Jewish girlfriends who failed to spark. Things then turn to the careers which will drive the couple apart - Jamie receives a cell phone call from a publisher as he bikes around a Brooklyn park and things begin 'moving too fast.' Meanwhile Cathy is having trouble breaking into the NYC acting scene, lamenting having to return to Ohio summer stock for work (Kendrick shows off her ability with tongue tripping lyrics, as she did in "Into the Woods," in an audition number where she sings her internal thoughts on stage). A delightful montage during a Skype call from New York to Ohio is like a musical within a musical, as Cathy performs in various famous roles with a 'Sound of Music' finale. Another highlight is Jordan's "The Schumel Song," in which he performs a short story he's written to raise Cathy's spirits. But the characters mostly come across as more centered on their careers than each other, a major stumbling block for a sweeping romance, and although the film's beginning, mid-point wedding and ending anchor the 'her story line moving backwards, his forwards' concept, the numbers that come in between seem a bit more random. Fans of musicals (Brown's lyrics are quite good) and Kendrick are sure to enjoy "The Last Five Years," which should also boost Jordan's stock, but LaGravenese never really gets it to achieve lift off. Grade: