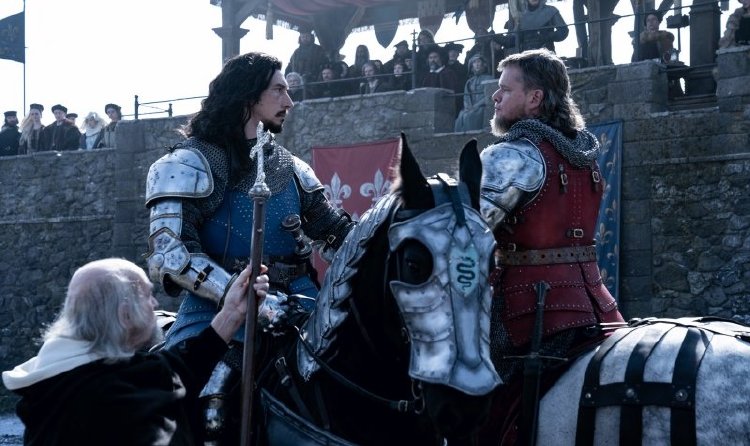 Sir Jean de Carrouges (Matt Damon), known for his battleground exploits, and Jacques Le Gris (Adam Driver), known for his intellect and charm, were friends and squires who fought alongside each other during the Hundred Years’ War for King Charles VI (Alex Lawther) of France.  But the favoritism of the king’s cousin, the hedonistic Count Pierre d'Alençon (Ben Affleck), for Le Gris spites Carrouges, robbing him of both land promised in a dowry and the captaincy he expected to inherit from his father.  When Carrouges’ wife Marguerite (Jodie Comer), accuses Le Gris of rape, Carrouges sidesteps the Count, going directly to the King with his request to fight Le Gris to the death in “The Last Duel.”

Director Ridley Scott worked with Damon on “The Martian.”  Now he has a Matt and Ben reunion on his hands and it is Affleck for the win in more ways than one.  Not only are the childhood Boston buddies reunited onscreen, but they also both wrote the screenplay along with Oscar nominee Nicole Holofcener ("Can You Ever Forgive Me?"), each tackling one of the three perspectives used to tell this real life story (adapted from Eric Jager's book) “Rashomon” style.  Affleck writes for his character’s protégé, Le Gris, while Damon pens his own Carrouges and Holofcener takes on Carrouges’ wife.  Unfortunately it appears that Damon and Holofcener didn’t compare notes as Damon’s Carrouges is so at odds with Holofcener’s, it undermines the impact of the film.

We jump off with preparations for the titular duel on December 29, 1386 right through the first clash of lances before flashing back to Carrouges’ point of view on the battlefield.  He acts impulsively, ignoring orders that lose Limoges to the English, but fights fiercely, saving Le Gris’s life in the process.  When he and some of his men lodge with Sir Robert de Thibouville (Nathaniel Parker) on the way home from battle, Thibouville, a controversial figure for disloyalty to the King, Thibouville’s comely daughter catches Carrouges’ eye.  A marriage appears to have advantages for both, Marguerite’s dowry supplying much needed funds for Carrouges, her father gaining back some respectability.  Or so they think.

The Count finds Carrouges crude and prefers the company of the well educated ladies’ man Le Gris and asks Jacques to fix his sloppy account keeping.  In an awkward position, Le Gris not only must collect money from his friend Carrouges, but demand Thibouville hand over a choice parcel of land that had been promised his new son-in-law.  Outraged, Carrouges sues the Count, further damaging that relationship as well as his friendship with Le Gris.

While we gain new perspective on all this when it is rewound through Le Gris’s filter, the man more a friend to Carrouges than Jean knew, when we see through Marguerite’s eyes, her husband is a thoroughly changed man.  Granted human nature will favor one’s own outlook, but Carrouges is affectionate towards a wife he clearly adores.  Through Marguerite’s eyes, he becomes a brute.  No lack of self awareness can account for remembering a scene of welcome so differently, one in which he embraces his wife unreservedly and she recalls being called a whore for wearing a low cut dress, her husband walking past her.  This changes everything in the stakes of that duel, one which will cost Marguerite her life should her husband lose.

Of the cast, Comer impresses the most, the actress impressing with the bravery of taking a most unusual stance in a time when a wife is the property of her husband (it is surprising to hear a 14th century belief, both forward and backward looking, that a woman cannot become pregnant without having enjoyed conception).  A blond Affleck is a lot of fun as the libertine Count, tossing off a line like ‘Come in, take your pants off!’ without breaking period.  Damon is fine as the put upon knight, twisting himself into knots over perceived slights, but suffers from his schizophrenic portrayal.  ‘Last Week Tonight’s’ John Oliver should enjoy Driver’s quick-to-strip charming egotist.  Lawther suggests inbreeding in his King.  The film also stars Harriet Walter as Carrouges’ judgmental mother and Marton Csokas as Crespin, a friend who reunites Carrouges and Le Gris only to have Marguerite come between them.

As would be expected, Scott’s production cannot be faulted, from period locations through costumes, cinematographer Dariusz Wolksi favoring a steely, wintery palette.  Battle scenes and the duel itself are realistically brutal, Claire Simpson’s quick cuts alleviating some of the gore.  But that screenplay disappoints again with an abrupt ending.  When all is said and done, “The Last Duel” plays like a medieval soap opera with a modern #MeToo edge.