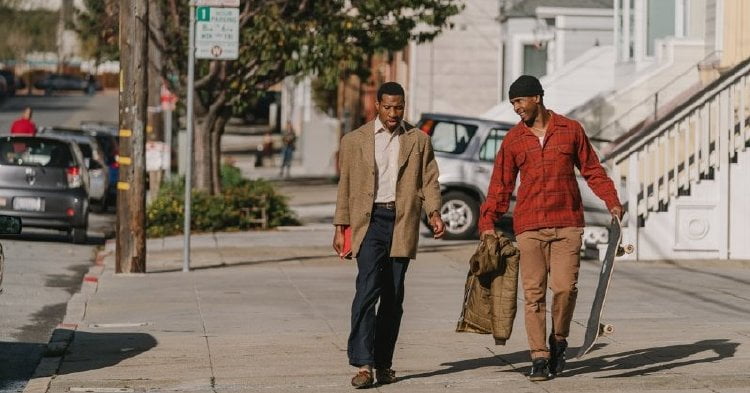 Jimmie Fails (Jimmie Fails) has been obsessed with the beautiful Victorian house his grandfather built after the war but had to sell years ago. When the new owner is forced to vacate the place, Jimmie has the questionable idea of moving in and restoring the ancestral home in “The Last Black Man in San Francisco.”

A little black girl, her two front teeth missing and hair in pigtails, looks up towards the sky. She's observing a white man in a hazmat suit cleaning up her neighborhood, an alien in a foreign land. A black preacher stands on a plastic milk crate overlooking the scrubby tract that leads down to the water crying out about the pollution of their neighborhood. Across the street, a young black man wearing a knit cap and plaid shirt gets on his skateboard, his friend running alongside him. They arrive at a beautiful old Victorian home in the Fillmore district, once known as the Harlem of the West. As Montgomery Allen (Jonathan Majors) keeps watch from across the street for its white owners, his friend the skateboarder, Jimmie Fails (Jimmie Fails), begins touching up the trim on the house. Jimmie will tell anyone who will listen that his grandfather built this house in 1947. It is where he grew up and where he yearns to return but he feels like "The Last Black Man in San Francisco." This melancholy piece of magical realism is an ode to a house and a city whose gentrification is displacing those who once made it vibrant, an intraracial cousin to "Blindspotting." That film, which also grew out of the childhood friendship between a white and black man, revolved around a police shooting in Oakland. This one also prominently features a shooting, but it happens off screen, director/co-writer/composer Joe Talbot and his childhood friend Jimmie Fails's film more of a theatrical fable than "Blindspotting's" more aggressively political dynamic. "Blindspotting's" interracial friendship was the cause of much of the film's tension whereas "Last Black Man's" intraracial friendship draws bullying remarks from within the buddies' own community, a Greek Chorus of five who hang in front of Monty's blind grandfather's (Danny Glover) home where he and Jimmie live. At first, we too wonder why Jimmie maintains a home against its owners' wishes. When the couple arrives, slipping by Monty's watchman, the middle-aged woman throws produce at the young man, telling him she will call the cops if he does not leave (her more pacifist husband says they will not, but begs Jimmie to go). 'I'm almost finished' is the calm reply. Jimmie wonders to Monty if they'd let him live there as a caretaker as they roll away. 'Probably not,' answers Monty. Then one day the friends see the couple moving out. She tearfully tells them her mother has died and her sister wants them out. Jimmie sees this as his chance, going out to the suburbs to visit the aunt who has been storing the home's old furniture. He and Monty move in. One day as Jimmie stands upon the home's roof, a Segway tour stops, Jimmie contradicting its guide's (Jello Biafra!) citing of the home's architect and nineteenth century origins. It doesn't sound plausible, yet he's so passionate, we believe him. The home's interior is stunning and as Jimmie shifts his work from the exterior to interior, Monty continues sketching and writing. He invites Kofi (Jamal Trulove), the leader of that gang that harasses them, over for a visit, something Jimmie doesn't understand given Kofi's abusive treatment of them. When Kofi's shot and killed, Monty writes a play which they stage in the home's top floor, even Jimmie remembering how Kofi once stood up for him when they were both residents of the same group home. Monty may be the artist of the pair, but he's more grounded in reality, supporting his friend yet recognizing Jimmie's delusion. He's content to care for his blind grandfather, relating the plots of the old film noirs they spend their evenings watching on TV. Jimmie, on the other hand, is so determined to retake his childhood home, one his father, James Sr. (Rob Morgan), somehow lost, that despite a financial situation that has him bunking in with Monty, he visits a bank and a local realtor (Finn Wittrock) in pursuit of a property worth millions. (The pair do have jobs, Monty working at a fish market, Jimmie at a nursing home.) It can be difficult to wrap one's arms around "The Last Black Man in San Francisco," Talbot's film flowing in many directions, but it is always engaging. Talbot uses many devices to achieve a dreamlike quality, from Jimmie's skateboarding through a time frozen San Francisco to a three-eyed fish. The house of Jimmie's dreams is a marvel, a time capsule preserved as if in amber. Emile Mosseri's stunning bassoon and violin score also features a moving cover of 'San Francisco.' Grade: