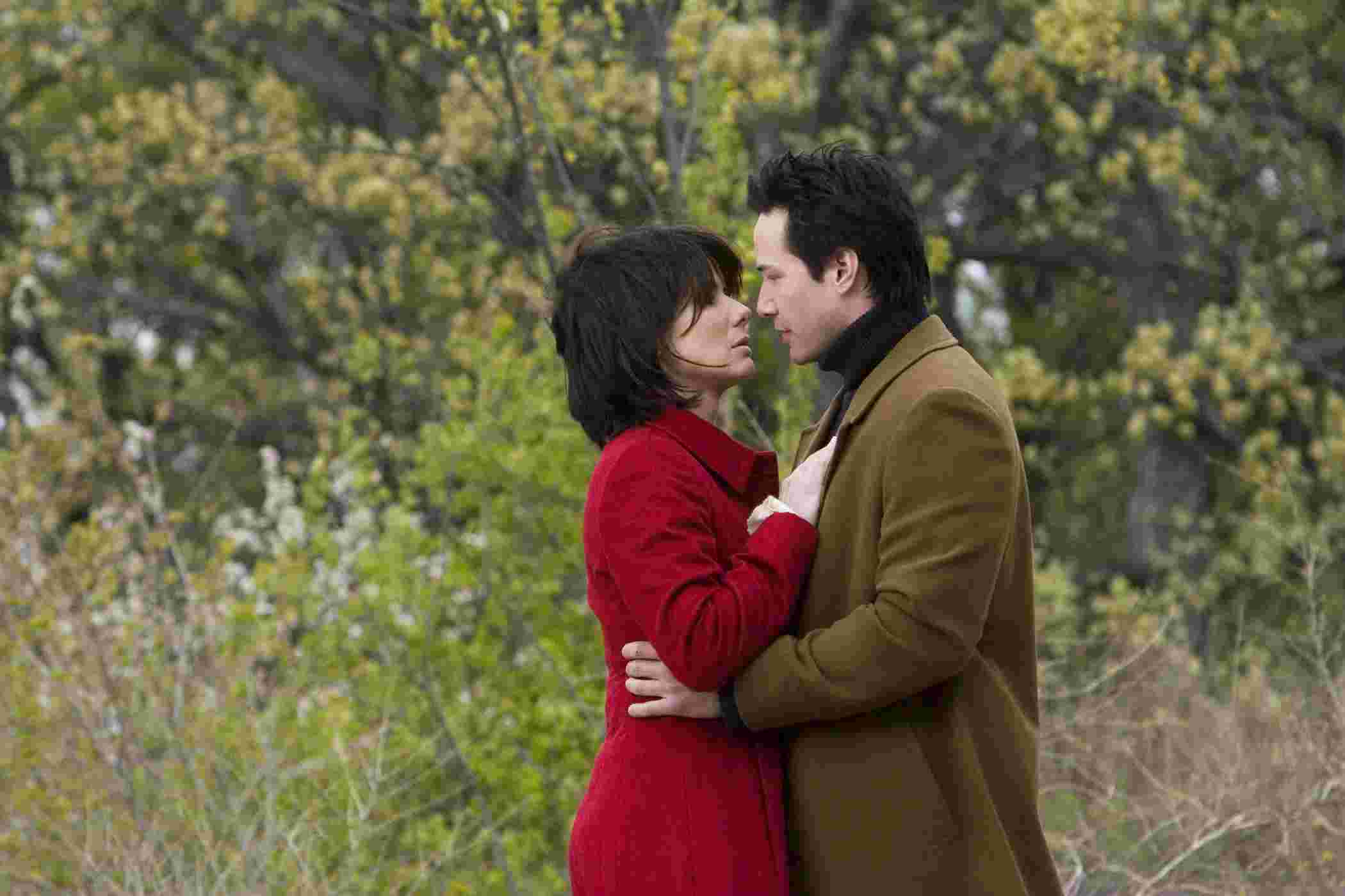 Kate Forster (Sandra Bullock, "Speed," "Miss Congeniality 2: Armed and Fabulous") feels a need to shake up her life so she accepts a position with a Chicago hospital and regretfully leaves the rural architectural wonder she's been calling home for the big city. On a whim, she leaves a note in the mailbox for the next tenant and mentions the odd painted paw prints that run up to the front door. Two years earlier, architect Alex Burnham (Keanu Reeves, "Speed," "Constantine"), who is returning to restore the house his father built, finds her note and is a bit confused. His confusion turns to amazement when he is outside working and sees a stray dog run through his paints, right up to the door of "The Lake House."

Costars Reeves and Bullock, back together again for the first time since 1994's "Speed," have more chemistry than ever, but they're stuck with a script (screenplay by David Auburn ("Proof") adapting the 2000 Korean film "Il Mare") with such a blatant disregard for time/space logic that the film rankles no matter how serious its charms. Call this one a good flick for forgiving chicks. The film no sooner starts than it plays a bad card. Forgive the mailbox as so 'magical' that a letter left in 2006 can be found in 2004 (I tried hard to make parallel time fit, but the filmmakers blow that concept as well), but why would Alex, who has just read a request to forward mail to a new address, answer a letter and *put it into his own mailbox*??? A tree planted in 2004 suddenly appears in 2006 when it would have been there all along. A dog responds to a name given to it by an owner it hasn't had yet. Gaffes like this abound in this film and an early 'symbolic' trauma is easy to peg as a later real life event. And yet, the romance is so touching, the emotions expressed by the leads so real, that it is a difficult film to not enjoy. Bullock has never been more wistfully dreamy, Reeves more hungry to engulf a woman in his arms. They also enjoy a fine cast of supporting players, like Shohreh Aghdashloo ("House of Sand and Fog") as Kate's down to earth colleague and Willeke van Ammelrooy ("Antonia's Line") as her literature-loving mom. (Nice touch that Kate and her mom are connected to her deceased dad through his books while Kate is connected to Alex through the written word as well.) Ebon Moss-Bachrach ("Mona Lisa Smile," "The Dying Gaul") is well cast as Alex's younger brother and Lynn Collins, star of 2004's "The Merchant of Venice," shows notable and charismatic range as Mona, a ditzy woman wearing her heart on her sleeve for Reeves. Only veteran actor Christopher Plummer ("Inside Man") overplays his hand as Alex's estranged dad. Director Alejandro Agresti ("Valentin") may not have fixed the timeline issues, but he has gotten nice performances in a fine looking production. Cinematographer Alar Kivilo "The Ice Harvest" makes some fantastical scenes shimmer and uses seasonal changes and the titular house to good effect. "The Lake House" is a frustrating film, one of many charms and genuine emotions deeply flawed by sloppy illogic. Still, I cannot imagine anyone seeing this film not becoming invested in Kate and Alex's ultimate fate.