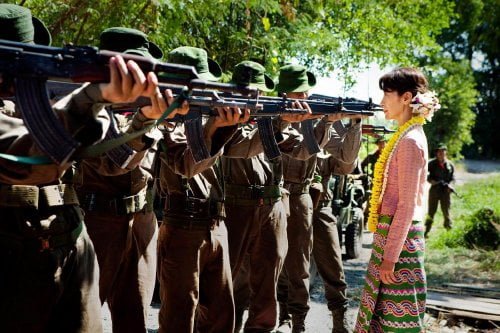 Aung San tells his young daughter a story about his beloved Burma and the struggle to bring democracy to his country. He leaves her for an important cabinet meeting, but the day will end in tragedy and death. Her father’s ideals and commitment to democracy have stayed with Aung San Suu Kyi (Michelle Yeoh) her entire life and, when she returns to a troubled Burma to care for her ailing mother, she puts her country first above all else as “The Lady.”

Rangoon, 1947. Burma's General Aung San tells his beloved three year-old daughter the tale of how their country was once a land of tigers and ebony forests before foreigners came and stole it all. Young Suu Kyi would learn of loss more directly when her father is assassinated in a bloody coup. Forty-one years later, living in Oxford, England with her professor husband Michael Aris (David Thewlis, "Naked," Harry Potter's Remus Lupin) and their two sons, Aung San Suu Kyi (Michelle Yeoh, "Crouching Tiger, Hidden Dragon") returns to her native land to be with her ailing mother. When student rioting gains momentum, local professors ask her to lead them to democracy in "The Lady." This political biopic cum love story seems like an odd project for director Luc Besson ("Leon: The Professional," "The Fifth Element"), and possibly his respect for his subject has resulted in a film that is a bit ponderous. But he also has attained two striking performances from his leads and many of the individual scenes pack quite a punch as a result. Television movie screenwriter Rebecca Frayn focuses on events beginning in 1989, when Suu returned to a volatile Burma, but presents events mostly through the perspective of a couple forced apart by their idealism and patriotism. After the establishing prologue, we go not to Suu but to her husband, receiving a fatal diagnosis alone in England in 1997 with his wife under house arrest in her native land. Another flashback brings them back to a domestic scene in 1988 of the couple and their sons Alexander (Jonathan Woodhouse) and Kim (Jonathan Raggett). Michael calls his wife in from preparing dinner to see news of rioting in Burma. Moments later a telephone call advises her of her mother's stroke (Suu's mother's political life following the assassination of her husband doesn't even get a reference here). And so the film continues, going back and forth between Suu's life and her husband's life back in England supporting her. The military crack down, forbidding public meetings to keep their opposition at bay, yet Suu holds a rally for her Democratic party that draws one million (Besson does a particularly good job creating crowd scenes). She's threatened with armed soldiers, but defies them, betting that they know her assassination would rile the populace beyond their control. Years pass with few visits until Michael is refused a visa when he's dying, the General offering Suu the opportunity of freedom to leave her country to be with him. They both know she'd never be allowed back. Even the award of the Nobel Peace Prize cannot doesn't budge the military who go so far as to cut her electricity so that she cannot hear the ceremony (a battery-operated radio allows her to hear Alexander make a speech on her behalf). She wins elections to no avail (although her 4/1/12 win may put her in the company of other leaders who were imprisoned only to rise and lead their countries, an event which coincides neatly with the release of this film). The cards were in Suu Kyi's favor even though the deck was stacked against her. When the General is first confronted with Suu, he visits a tarot card reader who advises him that he can negotiate his enemy's withdrawal. Later a pack of playing cards is used to make a decision, which ultimately goes Suu's way. Music is also a recurring theme. Yeoh is a seemingly ageless actress and her beauty, dignity and grace make her a great casting choice for a role which bridges many years. Her quiet power is palpable time and time again. There are no hysterics necessary for one to understand what this woman gave up to follow in her father's footsteps. Thewlis is possibly even more affecting in the lesser role of her husband, an Oxford professor yes, but a man used to studies, not violent oppression, and Thewlis gets that across. His courage is of a different, more personal sort as he too takes on the General for the rights of his wife and her colleagues. Besson lets him down, though, by having the actor also portray his brother in an early scene together which is so technically inept one cannot focus on anything but its deficiencies. (He undercuts Yeoh on a lesser scale by not trusting the audience to realize she reacts to certain death exactly the same way her father did.) Other aspects of the production are often beautiful (or not where they need be), especially as regards the aging and neglect of Suu's family home. "The Lady" is a more satisfying film overall than last year's other biography of a female leader, "The Iron Lady." In fact, Aung San has been called "The Steel Orchid." But despite the film's two plus hour length and the admittedly affecting focus on her marriage, Besson and Frayn have reduced the complexities which formed this inspiring woman into two beliefs - non-violent resistance and democracy. Yeoh and Thewlis, though, exhibit the human toll and spirit required to achieve them.

I was surprised when I learned that Luc Besson directed “The Lady,” an inspirational, Gandhi-esque biopic about a charismatic world-class leader. After all, he is the force behind such gun-totin’ tomes as “La Femme Nikita” and “Leon: The Professional” and I am not sure if Besson was the right choice as helmer. That said, the choice of Michelle Yeoh as Aung San Suu Kyi is perfect. Long before the first reference to Gandhi in “The Lady,” I felt that Daw Suu (Auntie Suu) to be a modern day Mahatma, a devout Buddhist and the true leader of the Burmese people. Michele Yeoh is perfectly cast as Suu, displaying the same peaceful and fragile grace and intellect that make Aung San Suu Kyi an adored icon in her country. We follow the charismatic woman and her organic involvement in Burma’s politics under the iron fist of the ruling junta. The film, after the prologue, moves to 1998 and writer Michael Aris (Suu’s British husband, played by David Thewlis) learns that he has terminal cancer. The story begins to jump back and forth in time, showing Suu’s life with Michael and their sons Alexander (Jonathan Woodhouse) and Kim (Jonathan Raggett) and her immersion into Burmese politics. This makes “The Lady” two films in one – an intriguing political drama (Suu was kept under house arrest for 15 of 21 years) and a sweet and sad love story between Suu and Michael. It is a nice bit of timing that “The Lady” comes out at just the time when Aung San Suu Kyi easily wins her constituents in her bid for Burma’s parliament. [As I sit writing this review, the BBC News is announcing the results of Burma’s by elections with Daw Suu overwhelmingly winning her district’s votes.] I have been following Aung San Suu Kyi for several years, now, and I am glad that the world may get to know her through “The Lady.”