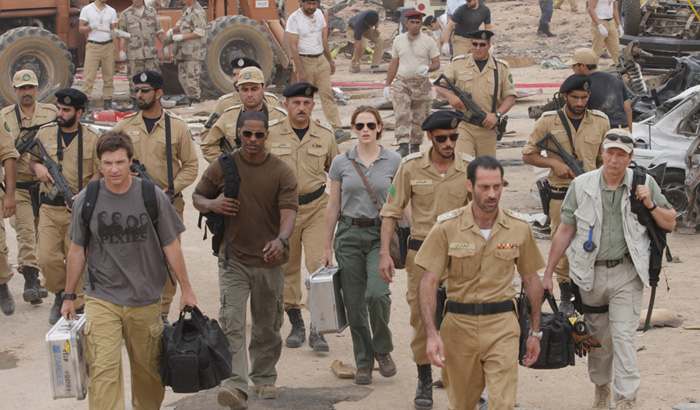 The Americans living in a secured enclave in Saudi Arabia are enjoying a day off, eating, drinking and playing baseball. A group of determined terrorists, dressed as Saudi soldiers, break into the compound shooting everyone – men, women and children – that come under their guns, leaving hundreds dead. A special FBI counter terrorist unit is rushed to the crime scene only to be hindered by Saudi officials who hamstring the team in their investigation in “The Kingdom.”

With the conflicts in Iraq and Afghanistan claiming so much attention, especially in the world of documentaries, it is refreshing to see a film steeped in the Middle East that is, at its heart, a first-rate crime thriller. Director (and actor, but not here) Peter Berg, co-scripting with Matthew Michael Carnahan, has come up with a cops-and-robbers flick that is both exciting and current. After the horrific attack, and an even more horrific bombing of the crime scene, killing many more people, the FBI musters its best team of investigators, headed by veteran agent Ronald Fleury (Jamie Foxx) to send on-site. The US State Department, though, nixes the deployment of the team because of Saudi intervention. They finally get clearance to travel to Riyadh but when they arrive at the crime site, they are refused even the most cursory investigation. Fleury and his colleagues – Grant Sykes (Chris Cooper), Janet Mayes (Jennifer Garner) and Adam Leavitt (Jason Bateman) – are put under the supervision” of Colonel Faris Al Ghazi (Ashraf Barhom). Their watchdog is to give the illusion of cooperation without actually cooperating with the Americans. Fortunately, for Fleury and his team, the colonel appreciates their investigative skills and soon turns a blind eye to their inquiries into the crime. The remainder of the film is a fine crime thriller that keeps you on your toes and, often, at the edge of your seat. The Kingdom” is a fine ensemble film where all the players work closely together to knit together a compelling crime drama and first-rate shoot ‘em up. Fleury, Sykes, Mayes and Leavitt are a seasoned team of criminologists who work well together, each in tune with the rest. The actors bring dimension to their characters in both drama and action. Jennifer Garner, in particular, envelopes herself in Mayes and gives new meaning to the word kickass. Ashraf Barhom is effective as the bridge between the Americans and the Saudi government. A host of character actors, including Jeremy Piven, Richard Jenkins and Danny Huston, give the film depth. Ali Suliman grabs your sympathy as Sergeant Haytham, the loyal bodyguard assigned to protect the FBI agents. Helmer Berg handles the copious action deftly as he brings the story into the bowels of the terrorist world but with a strong slant to the crime drama. The behind camera techs are uniformly top drawer from Mauro Fiore’s fine lensing and Tom Duffield’s dead on production design to the tight editing (by Colby Parker Jr., and Kevin Stitt) and Danny Elfman score. Berg and Carnahan’s screenplay is a combo of high tech modernity and old-fashioned detective story. This is a good time of year for an exciting, thought provoking action drama, before all the award fever hits the theaters. “The Kingdom” is that, and more, and deserves a look.