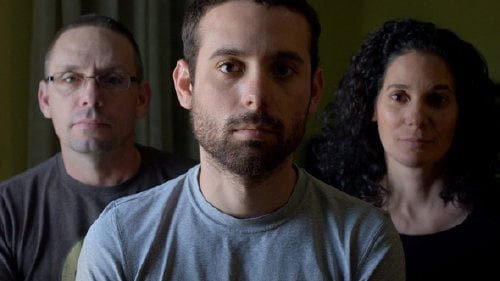 In 2010, a young soldier, Adam Winfield, witnessed the premeditated murders of unarmed civilians in Afghanistan by his comrades in arms. But, when he attempted to bring attention to the killings, he is, instead charged with premeditated first-degree murder. Facing life in prison, Adam, with the help and support of his father Christopher, fights for that life against “The Kill Team.

In late 2009, Staff Sergeant Calvin Gibbs replaced a platoon leader in southern Afghanistan. This new guy indoctrinated all but one of his squad into a new way of achieving 'kills,' using 'weapon drops' which incriminated Afghani civilians. In other words, Gibbs and his cronies architected premeditated murder. When he learned Private Adam Winfield was mulling alerting authorities, he threatened his life, forcing Winfield to take part in the murder of a family man as a member of "The Kill Team." Director Don Krauss, whose Oscar nominated documentary short "The Death of Kevin Carter" was also about moral ambiguity, has crafted a military true crime story with only one point of view - the purported whistleblower's. While the recounted events are shocking, Krauss doesn't dig deep enough to convince us that Winfield was really out of options nor does Winfield make a strong enough impression laying out his own defense. While "The Kill Team" is well worth watching, the jury's out. The film begins with Adam's parents Chris and Emma Winfield astonishment that their son has been charged with the same crime he reported. But they are the only ones he reported this crime to, claiming fear of retribution in country. Interviews with other members of the squad are hair raising. Afghanistan is described as a 'warriors' paradise.' Private First Class Andrew Holmes is gleeful remembering his first experience with bullets flying overhead, saying all he could think about was the song 'Danger Zone' from "Top Gun." Corporal Jeremy Morlock, who fell in quickly with Gibbs, is even scarier (he received the 2nd highest sentence after Gibbs's life, 24 years), yet he contradicts himself within Krauss's footage and is not challenged. Private First Class Justin Stoner, initially identified by the media as the whistleblower (he provided evidence used in the case), initially comes across as a bit cocky and sarcastic and we don't get a strong grasp on just what his role was. Gibbs was not interviewed and is only seen in home video footage walking in an Afghani field and some shocking stills featuring mutilated corpses of his victims. Gibbs is also shown with Morlock and Winfield posing by their kill. Winfield's expression reveals nothing. Winfield's case was entirely reliant on proving whether he was a willing participant. He began his alarm in a Facebook chat with his dad, telling Chris that civilians were being murdered. Chris made numerous phone calls and ended up frustrated by unreturned calls, but Krauss edits this bit in such a way that it appears more is being made as to how far the man actually went. We never hear why he didn't think to contact the press, even if we can deduce an explanation. Clearly Adam's father regrets not having pushed more. Did he not take his son's claims seriously enough and if so why not? Emma Winfield reminds us that in military trials, the U.S. Government is both judge and jury. The mother believes her son was bullied and is outraged by his sentence - 3 years and a dishonorable discharge. Yet, Winfield admits his role and a charge of manslaughter - the crime of killing a human being without malice aforethought - certainly fits, albeit under extraordinary circumstances. Winfield's strongest statement in the film is a message, 'there are no good men left here,' sent to Chris, but that umbrella allegation is never tested up the chain of his command. Krauss lays his groundwork well, building a case of men geared for combat, trained to kill, getting itchy trigger fingers during boring stretches of their deployments, but there is no psychiatric input. Neither do we hear from the prosecution. The crimes themselves are horrific, but without a stronger sense of why Winfield's defense failed, the trial outcome doesn't raise the outrage one suspects the filmmaker intended.