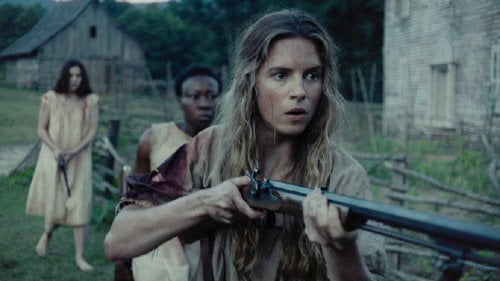 The American South, 1865. Three women, two sisters and their young slave, are alone on their plantation, struggling to survive without men to farm the land and the Union Army approaching. They eke out a tough existence but there is danger lurking. Two bummers, deserters from that army, find out about the women and lay siege to their home in “The Keeping Room.”

With her father and brother gone to fight for the South, it is up to Augusta (Brit Marling, "Arbitrage") to keep the farm running and protect her younger sister Louise (Hailee Steinfeld, 2010's "True Grit") with house slave Mad (Muna Otaru, "Lions for Lambs"). When Louise is bitten by a raccoon, Augusta must set out to procure medicine but a run-in with two drunk 'bummers' (renegade soldiers) has her running back to "The Keeping Room." With a blacklisted screenplay from Julia Hart, British director Daniel Barber ("Harry Brown") and his cast have recreated the South of 1865 for a feminist tale about survival and the morphing social hierarchy and growing empathy of those banded together against a common enemy. Never for a moment does Marling, Steinfeld or Otaru let a hint of modernity affect their speech or performance, cinematographer Martin Ruhe's ("Control," "Harry Brown") use of natural and practical lighting and composer Mearl's soulful fiddle furthering the period effect. The film begins with a taste of the violence on the horizon as a slave stops in the road as a horse drawn carriage approaches. It stops, a Southern woman tumbling out only to be followed and shot by Henry (Kyle Soller, 2012's "Anna Karenina"), a bummer traveling with Moses (Sam Worthington, "Avatar," "Cake") and his dog Battle. The slave is also killed, the carriage set ablaze. At the farm, Mad cooks in the keeping room, but the women retire to the big house. Augusta and Mad work together, but Louise is rebellious, trying on her late mother's clothes rather than helping with chores. It is clear Mad has had a hand in raising Louise, but Louise regards her with disdain. Things begin to change radically after Augusta's seen the threat first hand. She shares some hard spirits with Mad and asks her about sex, later leaving Louise with Mad and a shotgun in an upstairs bedroom as the bummers attack, the two situations commenting upon one another in unforeseen ways. The women we see at the end of the film are an entirely changed society than the one we met. There is one scene in the film that vividly recalls "Gone With the Wind," a Yankee and his shadow creeping up a Southerner's staircase, but this film isn't a product of the Hollywood studio system, often almost dreamlike. At one point, the three vastly different women assembled in the keeping room were far more reminiscent of the closure of "3 Women." Hart's script draws these three women together through traumatic experience, one that even turns its own common enemy on its head to incorporate the deepest kind of forgiveness. This Civil War tale told on a small scale is moving and elegiac, yet ends with survivalist spirit in the face of the end of a world. "The Keeping Room" is one that lingers. Grade:

What you can expect of “The Keeping Room,” early on, is a slowly paced film that delves into the daily life of the three women, Augusta (Brit Marling), Louise (Hailee Steinfeld) and Mad (Muna Otaru). They tend the fields and the animals and it is shown in languid detail. Their relative peace is shattered by the arrival of the two heavily armed deserters (Sam Worthington and Kyle Soller). Their intentions are readily known to the women who prepare to defend themselves. This is when director Daniel Barber and screenwriter Julia Hart ramp up both the tension and the action as the two soldiers attack the house. What was once a case of survival becomes a life and death struggle. The women are the protagonists against the two human monsters who care naught about the lives of their victims – “The Keeping Room” begins with the two men shooting down a white woman and a black slave women in cold blood. This is the kind of feminist–led film that has you rooting for our three heroines and booing the heinous behavior of the deserters. It is the Civil War from the feminine viewpoint, a rare thing of itself, with Brit Matling as the strong-willed elder sister and Hailee Steinfeld as her rebellious younger sibling. Muna Otaru, as slave Mad, also shows the will and ability to survive and stand up for herself and the two women. Sam Worthington and Kyle Soller are mere two-dimensioned monsters whom you hope will be destroyed. The filmmakers do a fine job recreating the rural South as the Civil War rages in the distance. It depicts the rough life and many dangers facing the women as the war approaches. What they see is not a victorious army but the stragglers out to loot, steal and murder – and the women rise to the deadly challenge. All in all, “The Keeping Room” is not an action-packed film. There is action, though, grounded in a convincing story of survival.