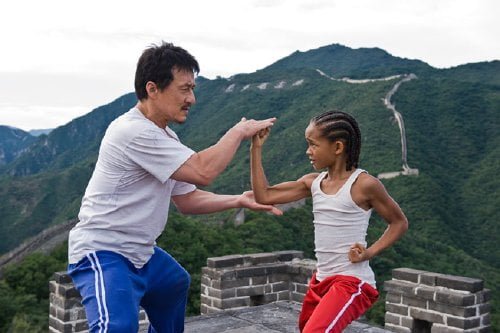 When popular 12-year-old Dre Parker's (Jaden Smith, "The Pursuit of Happyness") single mom Sherry (Taraji P. Henson, "Hustle & Flow") is transferred to China, he develops a crush on a new schoolmate that makes him the target of class bully Cheng (Zhenwei Wang). Dre turns to building superintendent Mr. Han (Jackie Chan) who just happens to be a kung fu master and asks for the help he will need to become "The Karate Kid."

Here is what a remake should be - a modern update with its own personality that nonetheless remains true to the core essentials of the original, even tweaking some of them. Granted, truth in advertising would demand this be renamed "The Kung Fu Kid," but that's quibbling. Jaden Smith, who had a nice start under dad's wing in "The Pursuit of Happyness," really establishes himself here. He not only makes Dre an appealing character, he's got impressive martial arts moves. Jackie Chan, too, isn't his usual twinkly self, but a sad, sober man with a tragic past (and a moustache!). Their bonding is believable. The 132 minute run time is excessive, but there really aren't any individual scenes which feel indulgent. The story is essentially the same. Swap moving from Jersey to California and the culture shock that entails for the more extreme Detroit to China move and change the parental love interest obstacle into a cultural one as well. Miyagi's fly catching trick is made into a cute gotcha joke and his unorthodox training methods are retained yet morphed into a lesson in respect. The famous stork stance is shadowed in a kung fu ritual where a female master engages a cobra on a temple pinnacle that is quite stunning. It must be said that this "Kid's" violence is pretty brutal. At a time when bullying has become a hot issue, "The Karate Kid" is a good avenue into discussion on the subject between parents and their kids. There are a few problems. Firstly, Sherry Parker doesn't seem to have a high enough position in the auto industry to warrant a transfer to China as they live very modestly in both locations. Secondly, Harry (Luke Carberry), the first kid to befriend Dre in China, is present on Dre's first day then disappears into the woodwork, even though he lives in the same apartment building. The use of the Great Wall is lovely, but it seems unlikely Dre and Han would travel out to it so often to train. The villainous kung fu instructor, Master Li (Rongguang Yu, "Tsui Hark's Vampire Hunters"), is also a bit over the top ('break his leg!'), but that's all in keeping with the film's "Rockyesque" finale I suppose. The production is aces, with Beijing dwellings given a realistic, lived-in look that's never over glossed. A school trip provides Forbidden City travelogue (Dre's mom is amused that she must give her permission for her son to go there) and a festival provides some charming color, including a shadow puppet play that is used to highlight Dre and Meiying's (Wenwen Han) first kiss. The narrow twisty streets of older Beijing residences provide a great maze for a foot chase. Smith not only comes into his own, but proves himself generous to his costars, most notably in a cute scene where he challenges Meiying to try Dance Dance Revolution after showing off his own considerable moves and she bests him. His relationship with Chan is poignant. Screenwriter Christopher Murphey was smart to hold Han's back story for a late revelation, shading in the character after establishing his bond with Dre. Zhenwei Wang is initially all intimidation as Cheng but becomes cowed when in Li's charge. Taraji P. Henson is a bit strident as Dre's mom. "The Karate Kid" was a family affair, counting both Will and Jada Pinkett Smith as active producers and it, in turn, is a terrific family film. It doesn't supplant the original, but stands proudly beside it.