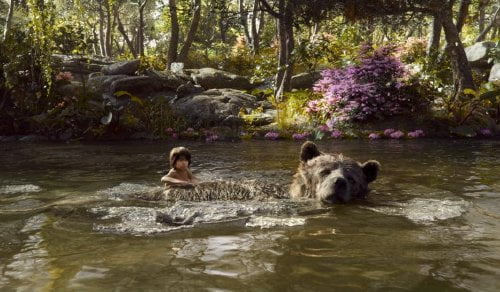 In an Indian jungle, panther Bagheera (voice of Ben Kingsley) tells the tale of Mowgli (12 year-old newcomer Neel Sethi), a man-cub abandoned when his father was killed by the tiger Shere Khan (voice of Idris Elba). Bagheera placed Mowgli with the wolf pack led by Akela (voice of Giancarlo Esposito), who forbids Mowgli's use of human 'tricks.' When all the animals enjoy a water truce during a dry spell, the man-scarred Shere Khan detects an odd odor, and determined to remove the threat, asks Akela how many lives are worth the one in "The Jungle Book."

You will believe that animals can talk. Director Jon Favreau ("Chef"), who started in indies with "Swingers," moved on to family fare with "Elf" and "Zathura: A Space Adventure," then jumped into the Marvel world with "Iron Man," has conquered the artificiality of CGI with a team of artists who have recreated an environment and its animals with startling realism. Adapting the Rudyard Kipling book while maintaining some of the lighter aspects of Disney's 1967 animation, screenwriter Justin Marks ("Street Fighter: The Legend of Chun-Li") gives us a grand adventure with real consequences built around the theme of finding one's own true nature. When Akela calls a summit to discuss Shere Khan's threat, Mowgli volunteers to leave the pack. After a tearful farewell with adoptive mother Raksha (voice of Lupita Nyong'o) and wolf cub bestie Gray (voice of Brighton Rose), Bagheera points his protege towards the man village, home of the feared red flower (fire). Along the way, Mowgli's seduced by the hypnotic eyes and purring voice of the giant python Kaa (voice of Scarlett Johansson), but saved by the opportunistic bear Baloo (voice of Bill Murray), who views the lad as a resource to procure honey. Baloo encourages Mowgli to indulge in his human ability to build tools, something forbidden by Akela. No sooner have they been joined by Bagheera, who convinces Baloo that the boy must return to his own kind, than Mowgli's kidnappd by the Bandar-log monkey army and taken to a temple where another creature, the Gigantopithecus, a 12 foot orangutan known as King Louie (voice of Christopher Walken), informs him 'I Wan’na Be Like You,' a jungle power grab for the red flower. It is here that Mowgli learns of Akela's fate and returns to avenge him by confronting Shere Khan. There are several scary moments for younger children - a mudslide that takes out a procession of buffalo Mowgli travels with (mercifully off screen), animal duels, the man-cub chased by far greater creatures and a raging fire - but there are also moments of great beauty and playfulness, like the new rendition of 'The Bare Necessities' accompanied by Mowgli and Baloo floating down a river, its banks lush with orchids. The story telling is top notch. Mowgli's red loincloth is explained in flashback and the film is scattered with humorous small details like porcupine porcupine Ikki (voice of the late Garry Shandling) laying claim to everything to everything he comes across like "Finding Nemo's" seagulls. King Louie emerges from the shadows like Marlon Brando in "Apocalypse Now" while Christopher Walken's NY mafia boss stylings are both intimidating and amusing. The film also features an armadillo, Jerbao (large eared rodents), rhinos, elephants and deer. Sethi is perhaps a touch too modern for the material, but the young actor delivers a very physical, relatable performance, his interactions with a world built afterwards always on target. The vocal cast is outstanding across the board - Kingsley's kind authoritarian cat, Elba's ferocious tiger, Nyong'o's maternal wolf, Murray's devil-may-care bear, Walken's tyrannical ape. The effects are nothing short of awe-inspiring, the immersive production a marvel (production design by Christopher Glass ("Arthur Newman") and Abhijeet Mazumder, cinematography by "The Matrix's" Bill Pope, editing by Mark Livolsi ("The Judge"), sound design by Christopher Boyes ("Guardians of the Galaxy")). John Debney ("The SpongeBob Movie: Sponge Out of Water") provides a disappointingly generic orchestral score, but we have those well known tunes (Johannson also contributes 'Trust in Me' over closing credits). Speaking of closing credits, stick around for those as they feature a CGI sequence of the animal characters emerging from the flipping pages of the book and animated 3D bees that fly into the auditorium. Grade: