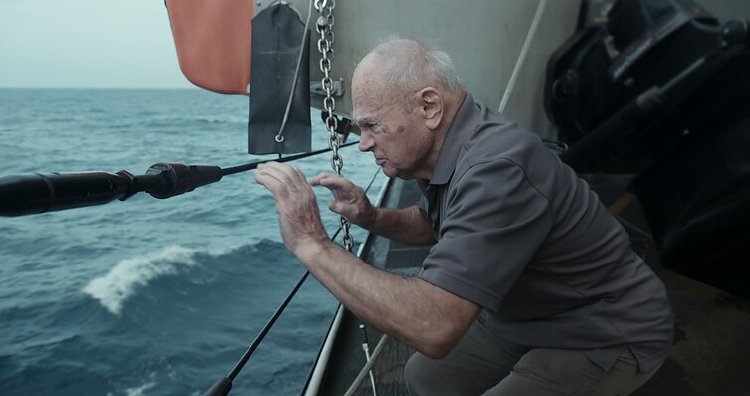 Inspired by the stories of his sea-faring grandpa, Simas Kudirka dreamed of palm trees, but his experience as a sailor on the Soviet Lithuania was more like prison.  When his ship ferried Soviet officers for a meeting about fishing rights on the U.S. Coast’s Vigilante off the coast of Martha’s Vineyard, the opportunity overpowered everything else, and Simas made “The Jump.”

Director Giedrė Žickytė makes a historical footnote from 1970 come alive again by taking its protagonist back to recreate it fifty years later.  Kudirka is an entertaining guide, spryly bounding about the Vigilante, his eagerness to retell his tale energizing the film.  What was an international embarrassment for the U.S. at the time comes full circle, albeit with a softer landing, as we learn of Kudirka’s eventual disillusionment in the American dream.

Žickytė opens with vintage U.S. news coverage, immediately engaging his audience with the need to know just why the U.S. would have handed a defector back to the Soviets.  In the present day, he cross cuts Simas’s account with that of the Vigilante’s commander, Ralph W. Eustis, who had locked eyes with the man aboard the Soviet vessel.  Their interpretations of the other’s non verbal communications frequently clash, but we understand Eustis’s point of view as soon as Simas tells us of crossing paths with a Soviet officer as he bounded up the U.S. ship’s ladder – if the man had jumped just two minutes later, things would have gone very differently.  Even so, the episode was shameful, the beaten man literally dragged back to what everyone assumed would be certain death.  At a press conference, an embarrassed President Nixon had no answers, condemning what had happened.

Simas spent years in Soviet prisons, but the American Lithuanian community never gave up on him, a group of young mothers keeping the flame alive.  Then they made an extraordinary discovery, an ironic true life twist.  Politics and the ambitions of a young congressional candidate spurred President Ford to secure the man’s release directly to American delegates who brought Simas and his family to settle in New York City.  (In a truly mind boggling recent interview, Henry Kissinger basically says Ford was naïve to ask, but his doing so was great for him, the U.S. and the world.  It is also quite something to see Republicans of the time behaving with true American patriotism, extolling ideals they now disdain.)

Žickytė has some fun with a cheesy looking television movie about the event starring Alan Arkin as Kudirka and a 70’s era news piece on Simas, now a superintendent and part owner of a Bronx apartment building, finds him astonished by America’s ‘oceans’ of food and clothes, its garbage full of riches.  But the man who stands amidst the tacky excesses of Times Square calling it ‘beautiful but not for me’ becomes jaded, wondering why he should die in this country when he has a homeland where his mother lies.  Simas and his wife return to the now independent Lithuania, the country that submitted Žickytė’s documentary as its submission for the 2022 International Oscar.

In 1970, Lithuanian seaman Simas Kudirka leaped from a Soviet fishing trawler onto an U.S. Coast Guard cutter. When he was unceremoniously seized and returned to the Russian ship, an incident of international scope arose from “The Jump.”

I vaguely remember this being in the news way back when but, to my defense, there was a lot going on at the time, like the Vietnam War. What began as a case of bad timing – Kudirka made his infamous jump while Soviet officials were aboard the USCGC Vigilante negotiating fishing rights – led to a decision by the cutter’s captain and his higher-ups to return Simas to the Soviets, knowing the punishment he will face. The State Department was already shut down for the weekend with no one available to offer guidance.

Even without the internet and social media, the incident went viral and the highest levels of government, both US and Soviet, became involved in what is a fascinating story of justice taken away and given back.

Of course, a documentary about such a significant event is rich in archival information, including the photograph of Simas, in mid-air, making the famous jump. Making things even more meaningful, the very likable and pleasant Kudirka provides ongoing interview footage right up to his 80’s in his native Lithuania – America, it seems, was too crazy for Simas.

Topic’s “The Jump” is featured in Arts Emerson’s Baltic Film Festival – click here for information.   It’s VOD release is on 3/1/22 and its streaming release on Topic is 6/30/22.