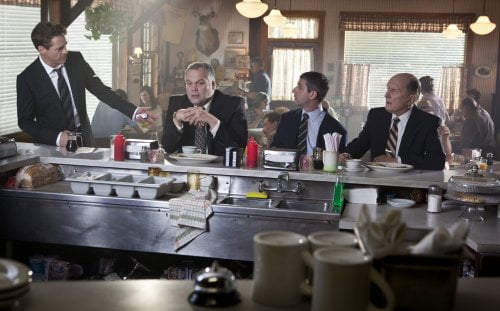 Hank Palmer (Robert Downey Jr., "Iron Man") has become the type of flashy, big city lawyer his small town judge dad (Robert Duvall) has always denigrated. Home for the first time in twenty years to attend his mother's funeral, Hank doesn't receive a warm welcome, but he is faced with coming to terms with his father when the old man becomes a murder suspect and Hank appears to be the only one suited to defend "The Judge."

The first film to appear under Downey Jr. and his wife Susan's production shingle, "The Judge" is a classic tale of a father and son struggling to overcome past differences and find common ground set within a courtroom drama. Some of the cast are very good, notably Duvall as the honorable old school lawman, Vera Farmiga ("Up in the Air," "The Departed") as Sam, the woman Hank left behind, and Billy Bob Thornton (TV's 'Fargo') as Dwight Dickham, the prosecuting attorney with a long held axe to grind with Hank. But although the film works in part, as written by Nick Schenk ("Gran Torino") and Bill Dubuque and directed by David Dobkin ("Wedding Crashers," "The Change-Up") tackling his first drama, its many elements never quite come together. There's a feeling of the film not hanging correctly, odd bits poking out, and Downey Jr., looking to bite into something that hasn't sprung from a comic book, seems calcified into the smug posturing that works so well in his suit of iron. Not always, of course, and there is the argument that the character of Hank is out of step with his emotions, but there's something about "The Judge" that's just off and the familiarity of Downey Jr.'s performance is part of that. When we first meet Hank, he's in a men's room and takes the opportunity to literally piss on a prosecutor, a bit of comedy that seems miscalculated at best. The man who presents himself to the world as a big success is then revealed to be on the verge of a divorce with the only person he loves other than himself, his young daughter Lauren (Emma Tremblay, "Elysium," "The Giver"), about to made a legal issue. He's just gotten the call about his mother's death in court and his reputation is such that his request for a delay is questioned. Hank responds with sarcasm. Back in Carlinville, Indiana (actually the lovely Shelburne Falls, MA), although he receives a warm welcome from younger brother Dale (Jeremy Strong, "Parkland's" Lee Harvey Oswald) who's not-quite-right in a way that's never defined, it's clear there's no love lost from dad, whose strong pull on older brother Glen (Vincent D'Onofrio, "Full Metal Jacket") colors him neutral. Hank's immediately yanked back into childhood as dad demands vehicles be backed into the driveway, but the next day he observes something in dad's court that has him jumping to conclusions he believes give him an upper hand. It must be noted that it's an odd conclusion to jump to, and herein lies the film's major problem. Time and again, the writers attempt sleight of hand - tossing out ideas in order to upend them with a different revelation - but the tactic doesn't work and Dobkins' direction of plot is ungainly. Where the film does succeed is in a few scenes of genuine emotion, most notably in a central piece where son is first faced by his father's mortality. Aroused in the middle of the night by sounds of distress, Hank finds his father collapsed in his bathroom, vomiting. Things get worse. Downey Jr. shows a tentative compassion that's just right for the scene. Then Hank's daughter tries to come in and in their efforts to keep her out, the two men begin to laugh together. The actors really bring it and for a moment "The Judge" is something genuine and true. But too often, the script and director get in the way. It's not enough, for example, that the judge hires local defense attorney C.P. Kennedy (Dax Shepard, TV's 'Parenthood'), a man so inexperienced his antiques shop appears his major source of income. Shepard's OK in the role, but when he shows up at court, his suit is so ill fitting it's laughable. I'm surprised he wasn't outfitted in overalls with a piece of hay jutting from his mouth. Expository moments hit us over the head. A possible incest subplot is presumably negated, and yet is still incest. Carlinville's introduction is too Norman Rockwell, complete with a pickup where young crewcut lads sit in the bed yielding fishing poles. After last year's "Labor Day," Shelburne Falls is beginning to look like a cinematic jinx. It's frustrating to see good work from the actors undermined. In different hands with a script polish or three, this could have been so much better. Grade:

The film begins with “this story imagines that journey,” so you know what is coming is all invention. Director Nick Ham and writer Colin Bateman use a premise that feels familiar: put two opponents in an enclosed space and let them at it. This is, as said, specifically about two men who hold the future of Northern Ireland in their hands. “The Journey” belongs to Colm Meaney and Timothy Spall as the careers-long antagonists thrown together by “chance.” (This “chance” factor changes the whole fabric of the story – more later.) Paisley must get back to Ulster for his 50th anniversary. But, fog socks in the local Scottish airport and he must drive to Edinburg to get home. Behind the scenes, McGuinness is convinced to go along for the ride, hoping…. The ride takes on its own character as it begins in near silence, with Martin doing most of the talking. (This leads to a silly, ongoing gag where McGuinness keeps asking to use Paisley’s cell phone, only to be gruffly refused every time.) The dialog moves from the sublime to the ridiculous and back againhe two actors make it almost convincing. If the filmmakers stuck with this invention, with more attention to the sometimes weighty subjects, there could have been something special in “The Journey.” Now, to the “chance” factor. High-level MI5 spook Harry Patterson (John Hurt) heads a team, including Irish leader Gerry Adams (Ian Beattie), to get McGuinness and Paisley together to work out a peace deal before the peace conference deadline. With the car under constant surveillance, including planted driver Jack (Freddie Highmore), Patterson comes up with ways to extend the journey. This whole subplot borders on slapstick with a dithering Tony Blair (Toby Stephens) fretting in the background as plans go wrong, which they often do. Whenever the film cuts to the “war room,” it takes away from what could have been a “this could have happened” story with its forced comedic interludes by the puppet masters. Still, I enjoyed watching Spall and Meaney and their verbal sparring, especially over issues of note.