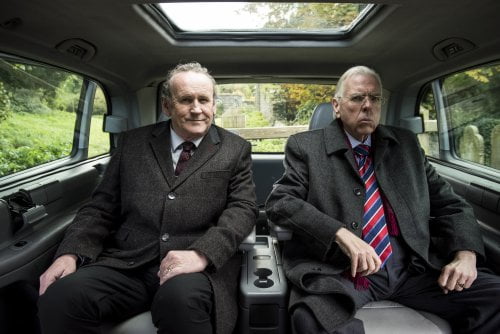 In 2006, the momentous St. Andrews Agreement brought an end to sectarian violence in Northern Ireland. This is the story of a meeting that never happened between the men on the opposite sides of The Troubles who signed that agreement. Ian Paisley, leader of the ultra-conservative DUP, and Martin McGuinness of the leftist Sinn Fein take the unlikeliest ride that will change the political fabric of their country during “The Journey.”

In October, 2006, in St. Andrews, Scotland, the governments of Britain and Ireland, including Northern Ireland's Democratic Unionist Party (DUP) leader Ian Paisley (Timothy Spall, "Mr. Turner," "Denial") and Sinn Féin's Martin McGuinness (Colm Meaney, "The Commitments," "Alan Partridge"), gathered to restore the Northern Ireland Assembly and put an end to the Troubles. Paisley and McGuinness were sworn enemies, neither man having ever addressed the other. With Paisley having to drive to Edinburgh to catch a flight back to Belfast for his 50th wedding anniversary, McGuinness announced he would go with him, upholding a custom for opposing political parties to travel together to prevent assassination attempts. But he had an ulterior motive, hoping to get Paisley to talk, and MI5's Harry Patterson (the late John Hurt) jumps at the idea, fitting their SUV with a hidden camera and recruiting junior government agent Jack ('Bates Motel's' Freddie Highmore) to be the driver for "The Journey." There's really only one reason to see "The Journey" and that is the performances of Meaney and Spall. This heavily fictionalized account from screenwriter Colin Bateman is, at best, a fantastical teleplay which bleeds credibility the further it progresses. Director Nick Hamm ("Godsend") has stated he got the idea after hearing about Paisley's private flight to Belfast with McGuinness, yet Paisley and his wife celebrated their 50th in St. Andrews. That alone is easily attributable to dramatic license, but the action at British Prime Minister Tony Blair's (Toby Stephens, Starz's 'Black Sails') MI5 base back in St. Andrews seriously blunts the film as they frantically communicate with their hapless manic pixie driver. Highmore's actually quite amusing feigning ignorance of his passengers' identities, giving the men the opportunity to introduce each other to their driver ('They are The Troubles. They are civil war. They are anarchy.') and debate the merits of Samuel L. Jackson. McGuinness frets over his lack of cell phone signal, asking Paisley if he can borrow his phone. Decidedly not. McGuinness keeps trying to break the ice. When a movie comes up, Paisley announces he hasn't been to the pictures since 1973, provoking McGuinness to imagine all the films he might have protested ('Enter the Dragon?' 'The Exorcist?'). His comical theorizing is brought to a halt when Paisley responds that he was protesting McGuinness's incendiary bombs. And so the back and forth continues, Paisley, all fire and brimstone and self righteousness, McGuinness openly probing. A question about how Paisley met his wife finally elicits something resembling humanity in the older man. Then they notice their tailing security car has gone missing and Jack makes a strange detour into the woods, MI5 delaying tactics. Bateman infuses his dialogue with a mixture of humor and political talking points which get more heavy handed as the action goes on (McGuinness breaks down in a graveyard, Paisley looks inward after taking control of an abandoned church pulpit). The final stretch of the journey rewards with two of the film's funnier moments, the two men co-opting famous historical quotes with Irish twists, Paisley using his blazing Biblical oratory to cow a gas station attendant. Meaney is the most natural of the ensemble, his McGuinness a willing debater always ready for a laugh, haunted by the blood on his hands yet fierce in his defense. Spall, initially hampered by the dental appliance that alters his speaking voice, grows into the religious zealot reluctant to give an inch. But Hurt is dragged down by a script that leads him into expository speechifying and Stephens's Blair stutters and flaps about, never more so than when his operation is discovered by Sinn Féin's Gerry Adams (Ian Beattie, "Starred Up"). Hamm's film wraps with a nicely written bit of political maneuvering as Paisley makes one demand of McGuinness he is not willing to give, a last minute bit of suspense before the usual historical graphics preceding archival photos of the two men serving as Northern Ireland's First Minister and Deputy First Minister. His film has its heart in the right place, knowledge of one's enemies clearing the path to human connection, but his artificial structure defies credibility. Grade:

The film begins with “this story imagines that journey,” so you know what is coming is all invention. Director Nick Ham and writer Colin Bateman use a premise that feels familiar: put two opponents in an enclosed space and let them at it. This is, as said, specifically about two men who hold the future of Northern Ireland in their hands. “The Journey” belongs to Colm Meaney and Timothy Spall as the careers-long antagonists thrown together by “chance.” (This “chance” factor changes the whole fabric of the story – more later.) Paisley must get back to Ulster for his 50th anniversary. But, fog socks in the local Scottish airport and he must drive to Edinburg to get home. Behind the scenes, McGuinness is convinced to go along for the ride, hoping…. The ride takes on its own character as it begins in near silence, with Martin doing most of the talking. (This leads to a silly, ongoing gag where McGuinness keeps asking to use Paisley’s cell phone, only to be gruffly refused every time.) The dialog moves from the sublime to the ridiculous and back againhe two actors make it almost convincing. If the filmmakers stuck with this invention, with more attention to the sometimes weighty subjects, there could have been something special in “The Journey.” Now, to the “chance” factor. High-level MI5 spook Harry Patterson (John Hurt) heads a team, including Irish leader Gerry Adams (Ian Beattie), to get McGuinness and Paisley together to work out a peace deal before the peace conference deadline. With the car under constant surveillance, including planted driver Jack (Freddie Highmore), Patterson comes up with ways to extend the journey. This whole subplot borders on slapstick with a dithering Tony Blair (Toby Stephens) fretting in the background as plans go wrong, which they often do. Whenever the film cuts to the “war room,” it takes away from what could have been a “this could have happened” story with its forced comedic interludes by the puppet masters. Still, I enjoyed watching Spall and Meaney and their verbal sparring, especially over issues of note.