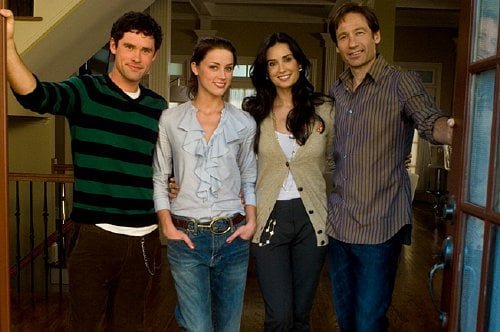 A moving van pulls up in front of a Tudor McMansion and a group of uniformed men not only carry in furniture, they dress the house. They're followed by a family of four, who pull into their new, gated community with a mission - to begin a viral marketing campaign that will have everyone wanting to keep up with "The Joneses."

Writer/director Derrick Borte has come up with a killer concept (story by Randy T. Dinzler), a good cast and luxe locations, all crisply photographed by Yaron Orbach ("The Ten," "Unmistaken Child"), but "The Jones" doesn't deliver the punch it should because it's all hung on a pedestrian framework. It's a film to recommend more to make people aware of socialized marketing practices, like the stranger on the street asking people to take his picture because he is actually trying to interest them in a new camera model, than to entertain them. Borte's weakness as a storyteller can be illustrated within the first ten minutes of the film. We are introduced to a 'family' - mother Kate (Demi Moore in a role that fits like a glove), father Steve (David Duchovny), teenaged son Mick (Ben Hollingsworth) and daughter Jenn (Amber Heard, "Pineapple Express," "Zombieland"). They're hardly in the door of their new home than Borte is tipping off his audience that all is not as it appears. The family communicates with too much insider archness. So when Jenn slips into Steve's bed, it is simply not shocking. Here was a gag that should have worked by easing off on the Jones agenda until after it had played. A jogger runs by and a video is recommended. Kate sets off to the local salon and hooks hairdresser Billy (Chris Williams) in her quest to spread her tentacles. Mick and Jenn wear trendy fashion to school and Steve drives a Porsche roadster. Soon we see their products sprinkled among the 'friends' they are acquiring. It's all capped off with a big bash at the Joneses, where electronics and upscale frozen appetizers can be shown off. Kate gives Steve one big, sexy smooch in front of the men folk who will notice the jewelry Steve has given her. This is good stuff, but... Each family member is given his/her own subplot and they're obvious. Kate is leading her own 'unit' for the first time and is more interested in sales figures than Steve's attentions. Steve took this 'job' (he's a former car salesman) because of his interest in Kate. Mick has a big secret and Jenn has trouble focusing on the high school boys she's supposed to be targeting. The neighborhood is largely represented by Larry (Gary Cole, "Pineapple Express") and Summer (Glenne Headly, "Kit Kittredge: An American Girl") and their fate is telegraphed through Summer's jittery attempts at her own salesmanship pushing a cosmetics line and Larry's pathetic need to appear successful for his wife. Admittedly, Borte also works in some subtext with his faux family having to act like a real one, most successfully when Mick pushes a new alcoholic bevie at a party of underaged drinkers, but there are really no surprises on how everything all turns out. The cast is game, particularly Moore who combines her sexy slinkiness with hard headed business acumen without becoming unlikable. An aged looking Lauren Hutton costars as KC, the boss who comes to appraise their work. "The Joneses" has something different to offer, but delivers it too conventionally.