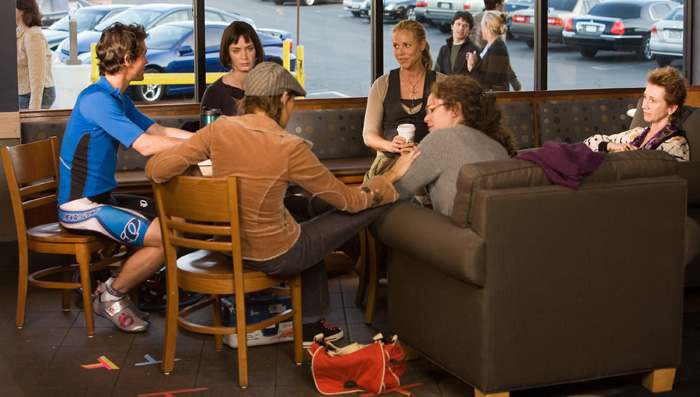 Six friends in California delve into the six books of their favorite author and find her observations on Regency England era behavior reflected in their own lives when they form "The Jane Austen Book Club."

I approached "The Jane Austen Book Club" thinking this would be this year's Sony Picture Classics's "Friends with Money," but the former film far outclasses this formulaic beach-read of a movie populated by one-dimensional cliches. Despite an impressive cast, including "The Devil Wears Prada's" Emily Blunt, not a single character in this movie seems real. Having just damned "Mr. Woodcock" with the faint praise that it featured one of the more expertly staged 'flying off the treadmill' gags, imagine my horror to see Maria Bello battling one in the film's opening montage. Furthermore, this montage is meant to illustrate Austen's 'Is not general incivility the very essence of love' quote, yet trots out modern annoyances like parking tickets, missed elevators and the aforementioned evil exercise equipment, none of which have anything to do with love and only some, incivility. Bernadette (Kathy Baker, "Nine Lives") is the group's eccentric earth mother - a knitting, pottery, macrame type of woman - who cooks up the idea for the club as a means to get recently dumped friend Sylvia (Amy Brenneman, TV's "Judging Amy," "Nine Lives") out of the dumps over an outrageously decadent sundae (she gets whipped cream 'top offs') with Prudie (Emily Blunt, "The Devil Wears Prada"), an uptight French teacher she's just met. Prudie is a buttoned up snob in a stylish bob who resents selfish macho hubbie Dean (Marc Blucas, "The Alamo," TV's "Buffy the Vampire Slayer") and is considering an affair with hunkie high school Romeo Trey (Kevin Zegers, "Wrong Turn," "Dawn of the Dead," "Zoom"). Jocelyn (Maria Bello, "A History of Violence," "World Trade Center") is a determinedly single Rhodesian Ridgeback breeder who impulsively invites Grigg (Hugh Dancy, "Ella Enchanted," "Evening"), a stranger who mistakes her for a hotel 'Buffy' conventioneer, to join their club to extend his literary knowledge beyond sci-fi. The group is rounded out by Sylvia's daughter Allegra (Maggie Grace, TV's "Lost"), a thoroughly bland daredevil character who exists only to give the film a liberal lacing of lesbianism. Screenwriter Robin Swicord ("Memoirs of a Geisha") makes an inauspicious feature directing debut seemingly allowing her cast to go wherever they please in a story that doesn't earn its results. While Maria Bello has a nice presence as the golden Jocelyn, her utter refusal to recognized Grigg's intentions paints her dimly and Dancy is typcast, albeit somewhat modernized, in his Prince Charming persona. Brenneman is convincing as a woman facing the disintegration of a twenty year marriage but Jimmy Smits ("Star Wars: Episode III - Revenge of the Sith") flits in and out of her life when the script, not underlying emotion demand. Blunt is completely unsympathetic as the shrill teacher which is only supported by the unconvincing arc that forces Blucas's Neanderthal to suddenly supportive. As Prudie's hippie mom, Lynn Redgrave, is an utter out of control embarrassment, a sitcom nut job and plot device. Zegers smolders, but his motivations are only explored through Prudie's eyes. The use of Austen's books provide a platform for chaptering, but never has a subtheme been so loosely and unimaginatively incorporated into its narrative. "The Jane Austen Book Club" may have seemed merely subpar had it been released by a major, but bearing the usually so reliable Sony Pictures Classics label makes it loathsome.