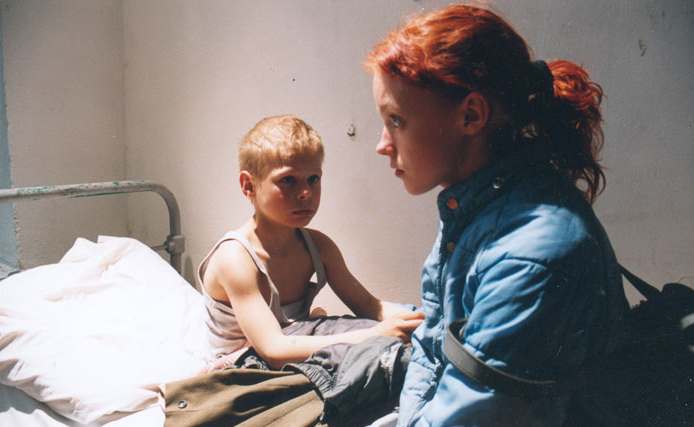 A well-to-do couple from Italy journeys to the steppes of Russia in search of a child to adopt. Six-year old Vanya (Kolya Spiridonov) is the lucky boy selected and his future parents leave to take care of all the legal matters required to make him their new son. But, when the mother of one of his orphan friends, recently adopted, comes in search of her boy, little Vanya is forever affected and he sets out to find his own mother in “The Italian.”

I purposely did not read much about “The Italian” before I went to see it. As such, this little gem of a film could unroll before me with few expectations and the result is a film that could have been incredibly sad but, instead, is about faith, hope and perseverance. Plucky little Vanya is considered the luckiest boy at the orphanage. He has the chance, he is often told, to escape his hard life and bask in the Italian sunshine with a mother and father who will unequivocally love him. At first, the lad is elated with the prospect of a new, happy life. When his friend’s mother comes to the home to find her son, Vanya realizes what he wants most – his own mother. To this end, he recruits one of the older orphans to teach him to read; sneaks into the administrative office to get hold of his personal records; and, armed with information of his past, sets off to find mom. This is a Charles Dickens style tale, a la Oliver Twist. Vanya’s orphan life is populated with kids who hope and pray for a home and family and the state of Russia’s economy permits enterprising adults, like Madam (Maria Kuznetsova), to make a lucrative business bartering the children for Euros. The Italian couple who come to find a child are smitten with the charming little boy and agree to adopt him. His friends dub him the “Italian” and are both happy for and jealous of his good fortune. But, Vanya’s decision to search for his real mother starts a journey that will test the will of the boy to achieve his mission. The Italian” represents a reversal of how you think things will go for little Vanya. Where you expect the adults to be mean spirited and other children to be sympathetic to his plight, the opposite occurs. As he journeys to the children’s home where his mother abandoned him, the kindnesses of the big people shines through (although they don’t know Vanya is an orphan) while the peers that he meets during his trek are far less than friendly. The outcome of Vanya’s decision is kept close to the chest by first time director Andrei Kravchuck, utilizing a screenplay by Alexander Burov and Andrei Romanov. This is an assured debut by the helmer that benefits from its well populated cast led by diminutive Kolya Spiridinov. Russian filmmakers have, for years, used children to good advantage in their storytelling – see the 1996 Best Foreign Language Oscar winner, “Kolya,” as an excellent example of such. “The Italian” is no exception with its wonderfully compelling central character and those, equally compelling, around him. The Italian” walks a fine line between tragic possibilities and cutesy caricature. It keeps its balance between these two poles with precision as it never loses sight of Vanya’s quest as the boy, only six, makes his way through a tough, demanding world. Don’t let the subtitles put you off. This is a nicely textured film that melds tragedy and comedy is equal measure. You’ll be glad you made the effort.