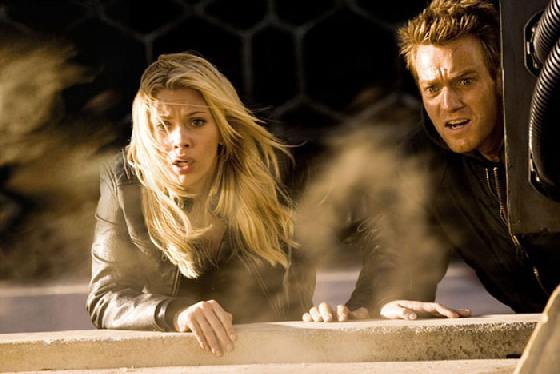 Lincoln Six-Echo (Ewan McGregor) lives in the carefully controlled, automaton environment that was the result of “the contamination” that destroyed much of the world’s living space. The strictly regimented society has one hopeful perk, though: a daily lottery where the winner is spirited away to the last pathogen-free zone on Earth, a utopian world called The Island.”

Lincoln Six Echo (Ewan McGregor, "Star Wars: Episode III - Revenge of the Sith") has drawn the attention of Merrick (Sean Bean, "National Treasure"), the man who takes care of all those who have survived an ecological disaster, because he's begun to act a bit out of the norm. Lincoln's been having nightmares that cause him to question his controlled life within Merrick's sterile environment, a place where men and women are segregated, health is monitored daily and everyone waits to win the lottery and get taken to the one last uncontaminated paradise on earth - "The Island." After reading Alex Kurtzman and Roberto Orci's (both of TV's "Alias") script based on a story by Caspian Tredwell-Owen ("Beyond Borders"), executive producer Steven Spielberg decided to match the material up with director 'more-and-louder-is-better' Michael Bay ("Bad Boys II," "Pearl Harbor," "Armageddon"). The result is a sci-fier with roots in such films as "Logan's Run," "THX 1138," "Looker" and "Coma," that devolves into one big chase scene after another with lots of explosions. The casting of indie darlings Scarlett Johansson ("In Good Company"), Steve Buscemi (HBO's "The Sopranos") and McGregor (OK, so he was in the "Star Wars" prequels) instead of straight forward action hero types ensures that the thought provoking moral issues introduced in the first half don't entirely disappear in the second, but even they cannot keep the chase scenes from cloning one another. It's a big, good-looking summer film that doesn't have the usual thoroughly hollow core. After awakening from disturbing visions involving a futuristic yacht amidst other jumbled images, Lincoln gets up for his morning routine, which includes an automated urinalysis indicating high sodium levels. He's denied bacon in the cafeteria line, until his good friend Jordan Two Delta (Johansson) shows him how to manipulate the nutrition clerk (Mary Pat Gleason, "13 Going On 30"). Guards are on hand to issue warnings on 'proximity alerts' which occur when members of the opposite sex get too close, something that's begun to happen regularly with these two. After breakfast, Lincoln reports to Merrick, who releases tiny mechanical microsensors into his eyeball to conduct a brain scan (shades of "Minority Report" here, as is Merrick's hand-controlled computerized desktop) to identify why he seems to be breaking free of the mold. Lincoln isn't the only person who's become inquisitive though. When the latest lottery winner, Starkweather (Michael Clarke Duncan, "Sin City"), is announced, Gandu Three Alpha (Brian Stepanek, "Kissing Jessica Stein") wonders if it is fixed, seeing as how he's been waiting seven years for his trip. Delta questions how new people are continually entering their ranks, still being rescued years after logic says all life forms must have perished. At work with partner Jones Three Echo (Ethan Phillips, TV's "Star Trek: Voyager"), Lincoln wonders where the tubes they inject with chemical substances go to, but this coworker seems not to care. Lincoln's excited when he's given leave to get supplies from McCord (Buscemi), a down to earth supervisor who sneaks Lincoln into restricted areas and gives him answers to some of his many questions. (What's God?' asks Lincoln. 'You know when you want something really bad and you close your eyes and wish for it? God's the guy that ignores you.' is McCord's wry reply.) When Delta wins the lottery, Lincoln's instincts tell him something's wrong. He returns to McCord's area at night to clamber through a ceiling tile and finds a totally new, and horrifying off limits area. He discovers where those tubes go and What is really in store for those going to 'The Island.' Bay moved the screenplay's timeline up to a more current 2050 because the story's moral issues are ones we're actually facing today (in debates about stem cell research among others). The film's got one of those retro-futuristic looks (Detroit stands in for L.A.) that helps keep budgets reined in, so Bay uses toys like a seven million dollar 2002 Cadillac CIEN (a 2002 concept gullwing), the WallyPower (a twenty-five million dollar yacht that looks like a stealth ship), and a fleet of black flying motorcycles known as WASPs to propel us several decades forward. Still, this film is very grounded in the now, tethered by such things as a very clever bit of product placement - Scarlett Johansson's current Calvin Klein commercial is woven right into the plot. Bay, with stuntmen galore, stages chases with planes, trains and automobiles, the most outrageous of which involves Lincoln and Delta crashing through a high rise on one side only to end up dangling, then dropped, from the building's logo on the other. Production designer Nigel Phelps ("Pearl Harbor," "Troy") and Cinematographer Mauro Fiore ("Tears of the Sun") contrast the monochrome look of Merrick's below ground environment with brilliant blues and vibrant, rusty oranges for both 'The Island' and the actual outdoor desert Lincoln and Delta escape to (the colors are also reflected in Johansson's hair and eyes). The film's color scheme is more interesting than its sets, all of which evoke other films. McGregor is very enjoyable to watch stretching an intelligence which was never supposed to exist, then coming face to face with a more cunningly treacherous version of himself. He and Johansson share nice chemistry, although the script allows them little in the way of sexual heat. The reliable Buscemi adds a lot of flavor in his supporting role. Bean is well cast as the comprised scientist and Djimon Hounsou ("In America") has lethal gravity as a corporate gun for hire who finds similarities in his targets' current plight to his own history. "The Island" wraps with a visual representation it hasn't earned, as scores of people calmly enter into a free state that should by rights cause panic. But it's still a better than average popcorn movie and may indicate the beginning of a new direction for Bay if he can ever break away from incessant action and continue to sway further towards the cerebral.

What Lincoln and the rest of the inmates of this sterile prison do not know is that they are not human but genetically constructed, exact replicas, called agnates, of the wealthy purchasers of product living up above. “The contamination” is a sham to placate and subjugate the denizens of his world and the lottery does not mean the freedom Lincoln and the rest believe. When he discovers a plain old moth, a creature he was told was extinct because of the ravages above, Lincoln realizes that his world is not real and that he and the rest are mere organ donors for the wealthy, used then disposed of unceremoniously. When Lincoln’s friend, Jordan Two-Delta (Scarlett Johansson), wins the lottery, he realizes that she is to be harvested, not released. His friendship with Department of Operations maintenance man Mac McCord (Steve Buscemi) gains the pair access to the outside and they make a break for it. But, the powers that be, in the persona of cloning corporation owner Merrick (Sean Bean), will brook no escapes and send henchman, Albert Laurent (Djimon Hounsou), and his murderous minion to finish off the fugitives. It’s “THX1138” meets “Bad Boys 2” and “The Fugitive” as Lincoln and Jordan must break out of their prison or die at the hands of their keepers. The sci-fi part wraps up neatly as they leave their future world and end up in the wide-open spaces of America, circa 2019. As Laurent uses his small army with its high-tech gear to locate the errant pair, the couple uses their newly formed wiles to thwart the corporation’s intentions. And, there is not one but two over the top car chases that rival the bombastic one in the aforementioned BB2.” Does director Michael Bay even know the term “economy” in filmmaking? I looked back at his filmography and his first feature, “Bad Boys,” clocked in slightly less than two hours, the shortest film he has ever made. Since then, none of his actioners even come close to that magic number with his ponderous and silly “Pearl Harbor” topping the three-hour mark. “The Island,” running some 2 hours and 16 minutes, represents the continuation of Bay’s propensity for over bloated filmmaking that, while well made, is a routine actioner that I have seen before, many times. I wonder what a good editor could do to cut out all the excess and fat in “The Island”? Shorter may well mean better, here The money is up there on the screen with production designer Nigel Phelps creating a future world below ground that is steeped in Big Brother. The action sequences are of good quality and there is some clever use of product placement with Scarlett Johansson’s luxurious lips, from her Calvin Klein advertisements, filling the screen. A sport concept car, by Cadillac, also gets a fair amount to screen time, too. Mauro Fiore’s camera is especially effective when the action moves above ground. No one will be seeing much in the way of acting kudos for his or her participation in “The Island.” McGregor and Johansson are good looking and up for the physical demands of their characters but is not a stretch of their talents. Of the supporting cast, Steve Buscemi gets the most out of his good guy Mac character but is out of the picture far too soon. Sean Bean fails to convince as the corporate ogre manipulating the lives of his creations. Djimon Hounsou is given little more than two-dimensions and his metamorphosis from bad to good guy makes no sense. Michael Clarke Duncan is underutilized as an early lottery winner/victim, on and off the screen in minutes. The best that I can say about “The Island” is that it is a well-made popcorner that is well suited as an air conditioning flick or DVD fodder.