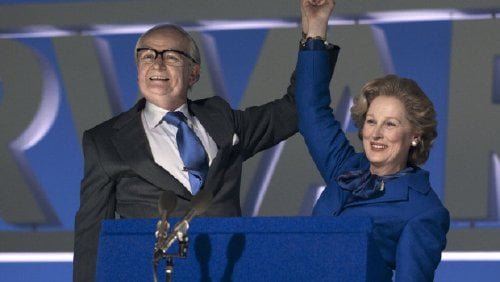 Margaret Thatcher is one of the most famous women in world politics (alongside Indira Gandhi and Golda Meir) and ruled Britain’s Conservative government from the 1970s into the 90s. During her reign as Prime Minister, her country underwent and saw many changes in the world, including the fall of the Berlin Wall and, with it, Soviet Communism. Her long life in politics is shown through the former politico’s elderly memories from her early days as a fledgling Member of Parliament to the woman who came to be known as “The Iron Lady.”

Margaret Thatcher (Meryl Streep) is still alive in Britain, but her life is very different from what it once was as the UK's very controversial Prime Minister 30 years earlier. In her 80's and suffering from the beginnings of dementia, Margaret struggles to maintain control of her own day to day existence as assistants and her daughter Carol (Olivia Colman, "Hot Fuzz's" PC Doris Thatcher) catch her in conversation with her husband Denis (Jim Broadbent, "Harry Potter's" Professor Horace Slughorn), dead for almost 10 years. In fact, it is the long delayed decision to clear out Denis's belongings which trigger Margaret's memories of how a grocer's daughter became the world leader the Soviets nicknamed "The Iron Lady." Screenwriter Abi Morgan ("Brick Lane," "Shame") took an unusual approach to the traditional biopic by presenting Thatcher's story through Margaret's own rheumy eyes, but while this approach almost guarantees built-in sympathy for its subject the end result is a hot button history related by an unreliable narrator. The device of using the current, aged Thatcher, suffering from dementia, makes us see her more as a human being, an older woman who could be any person missing a spouse and drifting into reveries triggered by the types of things that trigger flash backs in biopics. About the only thing that makes the current Thatcher different from most, is that more people take note if she slips out of her home unaccompanied and people of stature pretend to respect her opinion at the dinner table. This in and of itself is not a bad idea and Meryl Streep's incredible performance invests us in Thatcher's haze, but then we're sent back to the early years, when she is still a grocer's daughter during WWII and Alexandra Roach, in her feature film debut, undoes the good will Streep has created. The younger Maggie is a weird mix of timidity and outspokenness and Roach plays her with a frown and the impression that she's about to break out into tears at any moment. There is little joy to be found in this earnest young girl, so it's a bit of a riddle as to why Dennis Thatcher (Harry Lloyd, "Jane Eyre"), known for his sense of humor, is so drawn to her. He says it's because of her inability to be a 1950's housewife, but this becomes a problem when Streep and Broadbent take over the characters with Broadbent directed to portray Dennis as comic relief when he's not moaning about his wife's disregard for family. Fragmenting the 'romance' which is purportedly the heart of the film lessens its credibility, no matter how many times Lloyd chooses to cut to the couple dancing. The 'young' years are by far the film's weakest. Put Streep back in the center for the 1980s and at the very least we can be amazed at the actress's ability to disappear into character, even one so well known and documented (she gets a lot of Thatcher by the way she moves her mouth, almost tasting her words as she speaks them, and her hawklike stare and posture). Here, at least, we get a modicum of history's Margaret Thatcher, a woman who sells her own brand of Reaganomics with a 'pull oneself up from the bootstraps' mentality. Too bad Reagan himself, Thatcher's most well known ally, is barely in the picture (he's seen only once in archival footage). We also see a woman of complete conviction in her own ideas, supported in all of them on the home front if not in Parliament. Her only concession to public opinion is at the hands of media handlers who groom her for her party run by trying to soften her image by banishing hats and the stridency of her delivery. Events highlighted include the death of her friend and advisor Airey Neave by an IRA car bomb, her much criticized public spending cuts, the Falkland Islands war (where even the warmongering Alexander Haig tries to counsel a cautionary approach), the miners' strikes, an assassination attempt via IRA hotel bombing and her extremely unpopular introduction of the Poll Tax, levied at the same rate for rich and poor alike, which led to the resignation of Cabinet Minister Geoffrey Howe (Anthony Head, 'Little Britain's' PM) and Thatcher's own fall from grace. (These last events are the only time we see Thatcher rattled, Streep magnificent allowing us to see that even Maggie herself realizes she's losing her powerful grip by indulging her sense of infallibility). Overall, Phyllida Lloyd's direction is much more competent that it was on the choppy, amateurish Mamma Mia!." Here it's story clarity that seems to elude her as evidenced by differing acting styles and character motivations from young to older Thatchers. We also get no sense of how history has judged Thatcher because of the way Morgan structured her script. But when Streep's on screen her powerful performance makes us believe in both the powerful Margaret Thatcher and the decrepit, deposed one. In her hands, "The Iron Lady" has been well served.

I got what I expected from a biopic about Maggie Thatcher starring Meryl Streep. From the moment she appears as the aged Thatcher who scurries off, unannounced to her protectors, to buy a bottle of milk, the actress envelops the role (and it her). Meryl is a true American treasure and there is nothing she cannot doo. With nuances of expression and voice, and less of makeup, she becomes the titular character in much the way she did with her Julia Childs in “Julie/Julia.” Her brilliant performance helps bolster some of the film’s shortcomings. The bulk of the film time is spent on older Maggie as she lives her last years with her husband Denis (Jim Broadbent). But, as we soon find out, Denis died long ago and it is her memory of him (or is he a ghost?) that is her anchor. This continuing interlude, while very sweet and quite sentimental, forces Maggie’s story, from early days trying to break into the male-dominated local political machine to becoming one of the most powerful and influential people in the world, to be given short shrift. Her fascinating rise in Britain’s politics to her election as PM and head of the British government is rushed through in often too brief episodes. The film, at just 105 minutes, could have stood having her early days and career explored more fully. “The Iron Lady,” directed by Phyllida Lloyd and scripted by Abi Morgan (a far departure from her work on this year’s “Shame”), does what it sets out to do and, with Streep’s centered performance, is an entertaining historical biopic. While I have really liked several femme performances this year (Michelle Williams, Keira Knightley, Viola Davis, Elizabeth Olsen…), Dame Meryl (the only reason the US should consider having royalty) stands out amongst them all. This is a good film with a great performance.