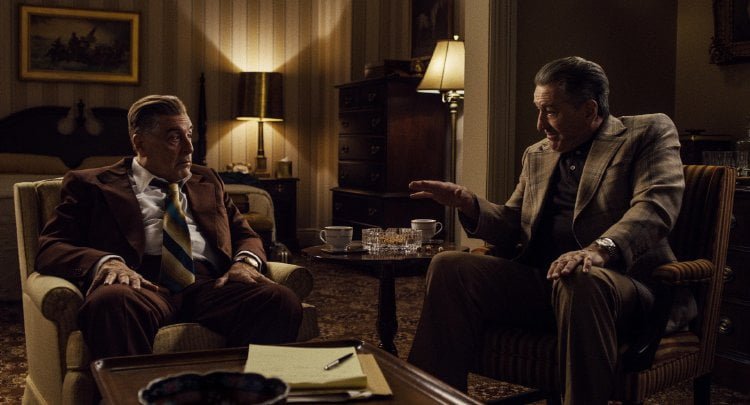 When Frank Sheeran (Robert De Niro) arrived at a customer’s loading dock and opened his truck to discover it empty of the sides of beef he was supposed to be delivering, he was defended against his employer in court by Teamsters attorney Bill Bufalino (Ray Romano). Celebrating their subsequent victory at Villa di Roma, Bill introduced Frank to his cousin, Russell Bufalino (Joe Pesci), a man Frank recognized as more than a local businessman by the company he was keeping, Philadelphia mob head Angelo Bruno (Harvey Keitel). Russell would become a friend and his faith in Frank’s abilities led him to recommend that Teamsters President Jimmy Hoffa (Al Pacino) hire “The Irishman.”

And even this setup summary, which consumes the first 45 of director Martin Scorsese’s 209 minute epic, doesn’t begin to touch upon myriad details and American history which is a constant, interwoven backdrop to the more personal story of misplaced loyalties and regret. Adapting Charles Brandt's controversial book 'I Heard You Paint Houses,' in which Sheeran’s former lawyer recounts his confessions (the title is mob slang for a hit, as in ‘painting the walls red,’ and the first thing Hoffa says to Frank), Steven Zaillian ("Gangs of New York," "Moneyball") skips around a time line anchored with Sheeran’s elderly 2003 present and Frank, Russell and their wives’ 1975 drive from Philly to a Detroit wedding in which business is conducted along the way. The film will reach back all the way to WWII for a flashback illustrating Frank’s matter-of-fact ease with killing as he carries out unspoken orders to dispense with POWs. De Niro will play the character throughout these decades with the benefit of convincing de-aging technology (ironically, the contacts used to turn the actor’s brown eyes blue are far more artificial looking).

The film is somewhat bookended by cinematographer Rodrigo Prieto’s ("Silence") tracking shot down the corridors of a Catholic nursing home into a dingy room where Frank sits in a wheelchair. The family man who had four daughters with Mary (Aleksa Palladino) before marrying Irene (Stephanie Kurtzuba) is making his confession in the days before Christmas. It is clear that once the priest leaves, he expects no company.

After cozying up to Bufalino, who Frank had actually met earlier when the older man helped him get his Food Fair truck running at a gas station, Sheeran was looking for more money to support his growing family when he was approached by Whispers DiTullio (Paul Herman) to burn down a Jewish laundry for $10K. After casing the joint, Frank is called to the carpet by Bruno who has a stake in the business. Bufalino’s high regard and Frank’s genuine distress at not having done due diligence save his skin and Frank is given his first hit – on Whispers. As De Niro narrates, Scorsese gives us a montage of various hits all capped by throwing the smoking gun off a bridge into a river. Murder has become a routine part of Sheeran’s job and when he first goes to work for Hoffa, he shares his hotel suite, the better to keep his whereabouts off the books.

The brash and powerful Teamsters President is popular with his union members and the mob he so generously arranges bridge loans for from the Teamsters’ pension fund (it is said Las Vegas would not have happened without his support). Hoffa is also popular with Sheeran’s daughter Peggy (Lucy Gallina until age 12, Anna Paquin as an adult), who has previously resisted overtures from ‘Uncle’ Russell and her own dad (a flashback gives one no reason to wonder why). Someone who is not popular with either of Sheeran’s bosses is JFK, whose attorney general brother ‘Booby’ (Jack Huston) is going after the mob that helped get JFK elected. Sheeran finds himself delivering what turns out to be a weapons cache to contacts David Ferrie (played by Joe Pesci in Oliver Stone’s “JFK!”) and E. Howard Hunt to restore mob interests in Cuba.

While Scorsese presents his film as fact, there are many who point out holes in Sheeran’s story, but while the full truth may never be known, “The Irishman” will certainly revive interest in, among other things, the JFK assassination. The film is both classic Scorsese and a departure, a mob film featuring music evocative of the time (The Five Satins’ ‘In the Still of the Night,’ Percy Faith’s ‘Delicado,’ Jackie Gleason’s ‘Melancholy Serenade’) yet no Rolling Stones, flashy debauchery and violence replaced with workaday indulgences and sudden death, youthful ambition now aged remorse, De Niro his lead for the ninth time while Pacino is cast for the first. As in most Scorsese films, Catholic rituals are a constant, representing not only the beginning and end of life but all the sins in between.

And Pacino overshadows De Niro here, his big performance perfectly suited to Hoffa, a man who refused to believe in his own invincibility. The actor takes his character’s quirks – a hatred for lateness and a love for ice cream – and uses them ingeniously. In one of the film’s best scenes, Pacino goes toe-to-toe with Stephen Graham’s ("Rocketman") Anthony ‘Tony Pro’ Provenzano, a former Teamsters underling now needed for Hoffa’s return to the big leagues and it is a hilarious escalation of petty grievances, De Niro refereeing from the sidelines. The film also welcomes the retired Joe Pesci back to the big screen and he makes it worth the wait with a sly, understated yet commanding performance (watch him order a hit without gesture or saying a word!). Casting is an embarrassment of riches, the film also featuring Bobby Cannavale as Felix 'Skinny Razor' DiTullio, Domenick Lombardozzi as Anthony 'Fat Tony' Salerno, Sebastian Maniscalco as Joseph 'Crazy Joe' Gallo, Louis Cancelmi as Sally Bugs, Jesse Plemons as Hoffa’s foster son Chuckie O'Brien and Kathrine Narducci as ‘mob royalty’ Carrie Bufalino. Bob Shaw’s ("The Wolf of Wall Street") production design also stars, his work period perfection. The film is cut with Scorsese’s long time editor Thelma Schoonmaker’s usual, elegant precision.

There are 90 minute films which feel far longer than “The Irishman’s” 209, which only begin to be felt during its protracted ending. But while Scorsese downshifts for Sheeran’s final days, the slower trailing off has a purpose, one of an old man preparing for death while considering a failed life, however big its setting. More of a problem is that part of the regret that weighs so heavily is based on the betrayal of a friend when that relationship has been more overtly stated than emotionally expressed and while it was a good tactic to use Peggy Sheeran as a moral compass, her devotion to Hoffa, in this regard at least, doesn’t pass muster. Still, considering the movie’s grand sweep, one which intertwines personal and historical corruption, what Scorsese has achieved here is near perfection. It’s great to have Scorsese back doing what he does best. “The Irishman” is a triumph.

Frank Sheeran (Robert De Niro) fought bravely in World War II, is a truck driver, Teamsters activist and a person who, people say “paints houses.” He is also the man who, before his death in 2003, claimed to be the man who killed Jimmy Hoffa and his life story is the subject of “The Irishman.”

The project to bring the story of Frank Sheeran to the screen has been long-gestating for both Robert De Niro and the film’s director, Martin Scorsese, and the years-long effort has finally come to fruition with the epic story of “The Irishman.” The story begins (or ends, depending on your PoV) with a looong tracking shot through the halls and rooms of an assisted living center. There, we meet octogenarian Frank and he tells us his long and violent life story.

And, it is quite a story, based on Charles Brandt’s 2004 book, I Heard You Paint Houses, a narrative, non-fiction that spans five decades. Over the period of the film’s three plus hours, we get both the personal history of Frank Sheeran, his life, his loves and his many mob hits and a history of America through its ever turbulent modern times after World War II.

The history lesson is just a backdrop, though, to the violent story of a mob “fixer” who would follow orders to kill a man, then go home to have dinner and watch TV with his family. Robert De Niro plays the man, Frank, as the obedient follower of his mentor, Russell Bufalino (Joe Pesci), a power broker with incredible influence in the organized crime world.

Truck driver Frank, home from the war, breaks down on his way to a delivery. At the nearby gas station a stranger, Russell, lends him his assistance and gets Frank on his way. This kindness leads Frank to approach the mobster with his thanks for the help – and some prime steaks. Soon, the driver becomes union organizer and strong arm for Bufalino and begins his rise in the organization, eventually being made president of a large and powerful Teamster local. All the while, he “paints houses” whenever Russell tells him to.

Frank is introduced to the charismatic Jimmy Hoffa (Al Pacino) and, through Russell, offers his painting services. This begins a years-long relationship between the hit man and the influential leader of the Teamsters, the most powerful union in America. That relationship will lead to the end of Hoffa’s reign and more. Scorsese, always the storyteller and modern historian, takes his time to tell Frank’s tale and, as usual, fills the screen with a world of crime, power brokering, politics, murder and the law.

It is a pleasure to watch the work of a master filmmaker Martin Scorsese and the talents of his iconic stars – Robert De Niro, Al Pacino and Joe Pesci – that is an epic display of criminal Americana. De Niro plays Frank as a seemingly blank cipher whose ruthlessness always lay just below the surface but is always present. Pacino, as Hoffa, is perfect chewing scenery as the flamboyant and brash union boss whose demise is imagined here. Pesci is chilling in his portrayal of top-level Mafioso Russell Bufalino. When he “suggests” a job to Frank, it is with “You know. You were in the war.” As the film progresses, what that means soon becomes apparent.

If you pay attention to the media brouhaha brewing over the claims to Hoffa’s death depicted in the film, that the premises made in “The Irishman” are simply not true. That may well be, but it does not change that Martin Scorsese has created an epic tome that covers modern history and theorizes on the life and times of Frank Sheeran.