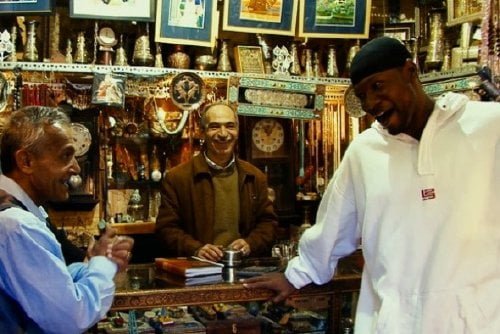 Kevin Sheppard is a journeyman basketball player who traveled around the world, from Argentina and Venezuela to Israel, Japan and the US, to ply his hoop skills. In 2008, he signed a one year contract to move to Iran to take a brand new entry in the Iranian Super League, Team A.S. Shiraz, and win the championship, a feat that has never been done, in “The Iran Job.”

Kevin Sheppard played college basketball for the University of Jacksonville, but didn't make it into the NBA. Instead the Virgin Islands resident is a journeyman who plays professionally for teams in other countries. In 2008, though, he hesitated on an offer to try and help take a new team to the championship playoffs but finally took "The Iran Job." Director Till Schauder gives us an amusing cultural fish out of water look at how a big, likable, outgoing Black American basketball player fits into life in Shiraz in southwestern Iran. Then it becomes something more around the halfway mark, when Kevin's friendship with Hilda, his sports therapist, and her two single female friends, and the country's Green reform movement rises and is quashed, opens his eyes to struggles he can relate to. Early goings establish Kevin's life at home with his girlfriend Leah, who isn't happy about his sudden news that he'll be headed to a powderkeg of a country in a week's time (President Ahmadinejad had just called for the destruction of Israel). He arrives in Iran, which we learn is quite basketball mad, and is quartered with the other non-Iranian player each team is allowed, a 7 foot tall Serbian called Zorda. Kevin's charisma and smile make him a hit with the locals (he's explains this as them 'liking Black people'), but he has a tougher time trying to get the A.S. Shiraz team into shape. The bottom ranked team loses its first game, then its second to an even worse team. Worse, Kevin takes out his frustration by literally kicking a bucket on his way off the court and the action, which is considered seriously unsportsmanlike in Iran, is caught by TV cameras and causes an uproar. Christmas brings homesickness, but Kevin is determined to celebrate the holiday and recruits his Afghan building super to help him find a Christmas tree - Kevin is amazed at how he can communicate with Abdullah as neither speaks each other's language, but subtitles show us something else, a series of continuous misunderstandings. And yet the end goal is reached. This is also the point Hilda, Elaheh and Laleh become prominent, invited to Kevin's for Christmas. The girls are nervous about taking off their head scarves and coats in front of the camera (Schauder filmed illegally, posing as a German tourist), but eventually do when convinced the film is for the U.S. They're quick to hide for a knock at the door. On a subsequent visit, we learn Kevin has to smuggle them out the back, so Abdullah doesn't know they are there. They could receive prison time for visiting a single man's apartment. Kevin thought the heavily covered women of Iran were submissive, but learns differently from these three, who are quite outspoken. Laleh wants to work from within to achieve women's rights rather than leave and enjoy someone else's. But there is also a touching naivety here. Elaheh has movie star looks, but she seems to believe the only reason she isn't one is because her father won't let her move to Tehran on her own. Later, when an Iranian player gets her number from Kevin, the two communicate with the type of text messages one would expect from American middle schoolers. But there is plenty of interest in sex in this repressed society (Kevin and Zorda can't get over the fact that their apartment was fitted with 100 sex channels, some kind of misguided catering to the West which they could care less about.) But we never learn just why Kevin has become such good friends with these three women, to the point of inviting them to share Christmas, nor do we know the relationship among the three. Are these women, who risk jail by visiting the apartment of two male basketball players unescorted, fans, real friends or something else? Are they attracted by the novelty of a Black American or rich celebrity? And just how much money is the 'lot of money' Kevin makes for playing in a county many consider too dangerous? The film also establishes the rules of Iran's Super League with a confusing graphic which implies we're diving right into the playoffs and some additional cutting would tighten pacing. The film's soundtrack consists of Iranian hiphop, a culture appropriated from the visitor's home country. On the whole, though, Schauder's found himself a magnetic central subject. Kevin's goofy, but he's also thoughtful and well spoken. He's concerned about the fate of his female friends after the election and regards his girlfriend in a whole new light because of the relationship. Back in the Virgin Islands, Leah gets her engagement ring and Hilda, Laleh and Elaheh maintain their bond via Skype. "The Iran Job" makes delving into a mysterious culture a whole lot of fun.

First time documentary maker Till Schauder picked the perfect subject for his feature film debut with Kevin Sheppard. The extremely likable native of the US Virgin Islands had traveled the international basketball circuit for quite a while before he agreed to give a year to develop the fledgling A.S. Shiraz team into Super League winners. Schauder follows his charismatic basketball player as he prepares to leave his home and family. He is nervous about his decision and filmmaker Schauder inserts news footage of George W. Bush declaring Iran “the axis of evil,” punctuating Kevin’s nervousness. Kevin is a stranger in a strange land when he arrives in Iraq and meets his coach and teammates. The wealthy owner of the team brought Sheppard onto his roster to be a ringer and win games for his team while, as captain, mentoring them to be champions. Along the way, he is befriended by three young Iranian women and Kevin gets a cultural lesson of what it is like to be a woman in Iran. For the American player, the entire Muslim fundamentalist rule of the country, which treats its women as second class citizens, is alien to him in concept and deed. The bond of friendship that forms between these four is an enlightenment not only to Kevin, but the viewer, too. Schauder’s roaming camera chronicles Kevin’s personal life living in a country with such different cultural mores from his own. It also follows his career, the reason we are here, as his bottom rung team slowly, and often painfully, struggles to get the wins. Kevin grows in the hearts of the team’s fans (Iranians are said to be fanatical basketball devotees), despite his country of origin, as he builds the A.S. Shiraz into a formidable contender in the league. “The Iran Job” has interesting characters, an insight into Iran’s culture and the story of one lonely American who, for a year, was his country’s cultural ambassador to Iran.