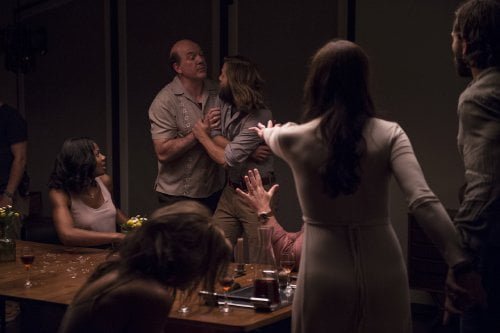 On the way to a Hollywood Hills dinner party with his girlfriend Kira ((Emayatzy Corinealdi, "Middle of Nowhere," "Miles Ahead"), Will (Logan Marshall-Green, "Prometheus") cannot avoid hitting a coyote in the road. He puts the suffering animal out of its misery, an eerie foreshadowing of the consequences of accepting "The Invitation."

Subverting expectations with former credits like the "Ride Along" movies and "R.I.P.D," writers Phil Hay & Matt Manfredi have crafted a multi-layered psychological thriller which director Karyn Kusama ("Girlfight," "Jennifer's Body") has finessed into cinematic character driven paranoia. We are surprised to learn that this dinner party is at the expansive home Will once shared with ex-wife Eden (Tammy Blanchard, "Into the Woods"), now married to David (Michiel Huisman, "The Age of Adaline"), both of whom gush about how much there is to celebrate. A very expensive '85 Rothschild vintage is being poured for guests, all friends of Will and Eden's. If that weren't strange enough, no sooner has Will entered the living room than he spies a woman, Sadie (Lindsay Burdge, "Francis Ha"), standing bottomless and seductively in a doorway. He begins to flash back to his former life, one which involved a young boy. David introduces a new arrival, the one unknown in the group, Pruitt (John Carroll Lynch, "Zodiac," TV's 'American Horror Story' With Will obviously uncomfortable and Gina (Michelle Krusiec, "Saving Face") fretting about the lateness of her boyfriend Choi (Karl Yune, "Real Steel"), David proposes a game, one he describes as like 'I Never,' except it's 'I Want.' While some of the group embrace the breaking of social barriers, many, including Will, become increasingly uneasy. Pruitt's initially heartfelt entry takes such a bizarre turn, Claire (Marieh Delfino, "Jeepers Creepers II") announces she's leaving. Every time things get really strange, a correction is made to restore the balance. The old pals who initially agreed with Will that the situation was strange now all seem to be fine with things, but that pricey red has been flowing all night. Kusama ups the tension "Rosemary's Baby" style, keeping background action partially obscured, open to interpretation. The home's warm glow begins to blast like a furnace. Theodore Shapiro's score thumps ominously, like water torture punctuated with nerve shredding violins. The extensive ensemble cast are convincing as a group of old friends assembled in an odd reunion, most making an individual mark. Both Marshall-Green and Blanchard keep us guessing as to their mental states with Huisman the smoothly accommodating moderator. Lynch exhibits an uncanny ability to appear both mild mannered and threatening. If there is a fault to be found with "The Invitation," it is that initial conclusions may prove correct, but the writing, acting and realization of the piece is so well done you may not breathe until it's over. The final image provides a devastating footnote. Grade: