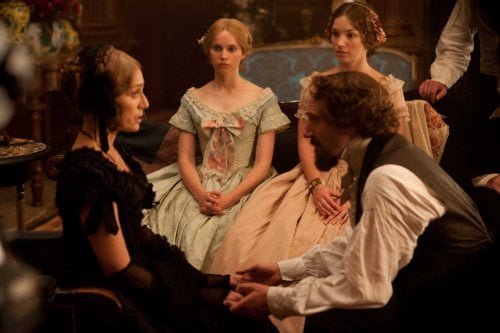 Nelly Ternan (Felicity Jones, "Like Crazy"), the youngest of her actress mother's (Kristin Scott Thomas) three daughters, is called upon to make her stage debut because her established sister is working elsewhere. The play is a coproduction between Wilkie Collins (Tom Hollander, "In the Loop") and the phenomenally famous Charles Dickens (Ralph Fiennes), a married father of ten who becomes quite taken with her. Mrs. Ternan is concerned about her daughter's reputation, but when it becomes clear that she lacks her family's acting gene, she nudges the girl towards a type of security that will turn her into "The Invisible Woman."

Ralph Fiennes's ("Coriolanus") second film is a deftly structured period production about a little known story (Abi Morgan ("Shame," "The Iron Lady") adapted Claire Tomalin's book). Dickens, well known for his championing of the poor, is shown to be rather callous about the rights of women within his own shadow while Nelly struggles between her attraction to the man and her own deeply held ideas on female freedom. Fiennes, working both sides of the camera, creates a deeply flawed Dickens without alienating our acceptance of Nelly's love for a man who perhaps could not distinguish his public persona from his personal one. When he's not isolating her in long shots, Fiennes uses many close ups of Jones's face, who lets us into her constant analysis of her place in Dickens's world. It's by far her best performance to date, an extraordinarily mature feminist picking her way though a relationship fraught with landmines. We first meet Nelly thirteen years after Dickens' death. She is a teacher, the wife of Margate School's headmaster George Wharton Robinson (Tom Burke, "Only God Forgives"), who revels in his wife's connection to the author 'as a child.' But she is clearly troubled, as recognized by the Reverend Benham (John Kavanagh, "Black Dahlia"), a Dickens enthusiast who follows her on one of her briskly paced beach walks, encouraging her to talk to his nonjudgmental ear. She resists, returning to help stage another Dickens/Wilkie production at the school, but he persists, as Dickens's words provoke the film's memory flashback structure. One surprise of Fiennes's film is to realize the level of celebrity Dickens had in his day. He is the light in any room, constantly surrounded by admirers. Recognized at a racetrack, the man is mobbed as the Ternans stand aside, clearly thrilled to be in his inner circle. But Dickens in his mid forties was at a crossroads - he loved to gather his children about him, yet his wife Catherine (Joanna Scanlan, TV's 'The Thick of It,' 'Little Britain') has been emotionally left behind. Scanlan is superb, her hurt registering to us if not his public as she recognizes Nelly's threat while at the same time cautioning the girl via her own experience. Dickens can be cruel towards his wife, and yet Fiennes finds a balance even here, a scene of awkward entry into his wife's bedroom and mentions of her headaches indicating a death of passion. (Later, as we witness Catherine disappearing as a workman boards up the connective door between their rooms, we are reminded that there is more than one invisible woman in this film.) It is a forced concession which propels Nelly into Dickens's world. During a birthday celebration, she is told Dickens is calling, only to find his wife at her door. Catherine has been asked to bring her gift, a piece of jewelry mistakenly delivered to her, to its rightful recipient by her husband. Shocked by his cruelty, Nelly nonetheless later accompanies he and Wilkie who bring her to the home of Wilkie's mistress, Caroline Graves (Michelle Fairley, "Philomena"), and their daughter, an 'initiation' rite of sorts which further distresses the young woman's sense of propriety. But Dickens's ardor is compelling and soon we are in France as the couple await the arrival of their own out-of-wedlock child. Two tragedies follow in short order and Nelly find herself in just the circumstance she had anticipated. We never learn how she was able to leave this past behind, but in confiding in the Reverend she is finally able to let it go and Fiennes closes on her rapturous face as she clasps Robinson's hand watching their legitimate son perform. Even so, Fiennes and Morgan leave us with questions. Dickens, who is described as a 'good man trying to do good,' is clearly the more intellectually stimulating partner. Nelly pointedly defends Robinson as 'a good man,' yet her marriage seems every bit as much a compromise as her scandalous affair, contentment vs. passion. They do not 'see' each other as Wilkie exclaims Nelly and Charles do, and yet Robinson's concern for his wife is more clear-eyed. Nelly's mother, too, must concede her moral concerns to economic ones. Everyone's lives are partially lived in shadow, as is neatly paralleled with Dickens's ambiguous ending to 'Great Expectations.' The production is period perfection, often shot in actual locations. Outside of Dickens's grand home, quarters are cramped, interiors dim, the Ternans' furniture dodgy. Costume (Michael O'Connor, "The Duchess," "Dredd") has lovely attention to detail without drawing undue attention. Ilan Eshkeri's ("Kick-Ass") score swirls menacingly around Nelly whenever she experiences distress. After Fiennes brutally masculine if somewhat sterile "Coriolanus," "The Invisible Woman" proves a more emotionally subtle and finely tuned director. The actor has given us a new Charles Dickens to consider, but the director has shone a light on a woman who conquered her own dark past.

Charles Dickens (Ralph Fiennes) was one of the first, if not the first, literary artist to establish an international celebrity. With that celebrity, though, come pressures on the man and his need for companionship other than his wife, Catherine (Joanna Scanlan). That companionship comes in the guise of Ellen “Nelly” Ternan (Felicity Jones), the daughter of an acting family, but the beautiful 18-year old does not know that she will become “The Invisible Woman.” This second directing job by Ralph Fiennes should be titled “The Invisible Women.” The story concentrates on Charles Dickens and his longtime affair with Nelly. Her invisibility is due to his celebrity – and loveless marriage to Catherine who is the other invisible woman in Dickens’s life. That said, Fiennes does a fine job both in front of and behind the camera. The director, with scripter Abi Morgan, takes the adaptation of Claire Tomlin’s 2013 novel and shows us what might have happened in the course of the affair that would have been scandalous in Queen Victoria’s England if it became public knowledge. The speculative story – Dickens destroyed nearly all of his personal correspondences, as did Nelly with his letters – paints the picture of how the two met and carried on their secret affair for 13 years until Dickens’s death. While Ralph Fiennes is good portraying Dickens, it is Felicity Jones who deserves kudos for her performance as the title character. Nelly is an intelligent young woman and an intellectual equal to her lover. But the filmmakers take their time building up the relationship that grows between the 40-year old novelist and his mistress half his age. The slow build to their first kiss makes sense, though; as the prudish pressures of Victorian society demanded that they keep their assignations totally secret. (Wife Catherine was not stupid and soon figures it out, even advising Nelly on how to deal with Mister Charles Dickens.) This look into the life of one of the world’s greatest authors opens up an examination of the cost of celebrity and fame on Dickens and those closest to him. The attention to period details, particularly costume, is well done and the film shows us a small slice of life on both sides of the tracks in England of the time.