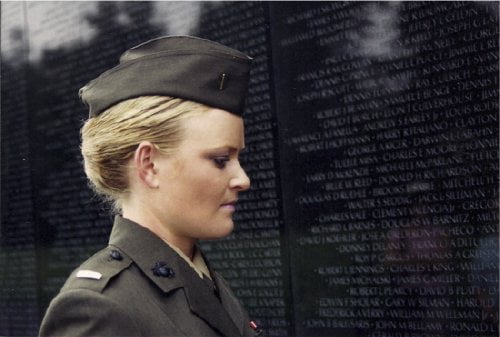 Kirby Dick has made films about masochism (“Sick: The Life and Death of Bob Flanagan, Supermasochist”), the bureaucracy of rating movies (“This Film Is Not Yet Rated”) and of closeted politicians lobbying for anti-gay legislation (“Outrage”). He switches his sights, now, to explore the epidemic of soldiers, mostly women, being raped within the U.S. military in what until now was “The Invisible War.”

Documentarian Kirby Dick ("Sick: The Life & Death of Bob Flanagan, Supermasochist," "This Film Is Not Yet Rated") has been exposing those who abuse their power throughout his career, from the Catholic Church to closeted politicians against gay rights. In his latest, "The Invisible War," he has uncovered one of the worst and most covered up series of crimes yet - the sexual abuse and rape of women (and men) in all branches of the military. These victims not only rarely see the perpetrators accused, let alone brought to trial, but those who have the bravery to speak out (25% do not because they would end up reporting the crime to the criminal, their immediate superior officer; 33% do not because they would be speaking to a friend of the criminal) frequently have the tables turned against them with charges of adultery and conduct unbecoming an officer! Dick's spoken to a lot of survivors, but focuses on a handful. Kori Cioca lives in constant pain after having her jaw broken during a rape while she served in the Coast Guard. She hasn't eaten solid food in five years and her marriage has suffered despite having an incredibly supportive husband. She would have killed herself had she not discovered she was pregnant with her daughter. At the film's end we learn she's been denied restitution for her reconstructive surgery because she was two months short of serving her full two years. This woman's life has been destroyed for serving her country and there are countless other cases. We learn that a military court has determined that rape is 'an occupational hazard' of serving in the military. Sexual abuse training in the military is downright offensive, bordering on holding the victim accountable. Outrage is the only viable response. As if Dick doesn't bring up enough horrific stories (one woman with severe PTSD was virtually held prisoner on an Alaskan base where she was serially drugged and raped, her phone conversations listened in on), we learn that rape is rampant at Marine Barracks Washington, the creme de la creme of Marine bases. These are the soldiers we see at Presidential appearances, the men and women who secure the White House. If there is a problem with "The Invisible War," it is, as with many documentaries, it's quick and shallow presentation of some statistics, heavily weighed to serve its point. We learn that 15% of male military recruits have attempted or committed rape, twice 'their equivalent in civilian society.' What does this mean? We're not told. There are other examples, but the stories that are told are so powerful, a little statistical wrangling can be forgiven. In fact, Dick's documentary has already affected the beginnings of change. When U.S. Secretary of Defense Leon E. Panetta saw the film, he changed the reporting hierarchy for sex crime charges, one of biggest issues presented by the film.

I like Kirby Dick’s filmography. He is always informative and entertaining and, with “The Invisible War,” totally serious but, still, incredibly informative and quite shocking with his plethora of data. Dick, though, does not just roll out the statistics – though we do learn things like: 20% of the women in the military reported being raped; but, 80% of the rape victims in the military do not report the crime; 5% of those indicted for a sex crime in the military are actually convicted. He also delves into the lives of a number of military rape victims and finds that PTSD cases are more prominent for these victims than even combat soldiers. This is not just about the rape epidemic in the military. It also explores the blind eye that the commanders of these soldiers victims, and their commanders, turn toward the crime. “It is your fault” or “you asked for it” tend to be the response of the almost all male investigators assigned to the rape cases. Kirby Dick, with “The Invisible War,” opens the eyes of the public who are led to believe that crimes like the U.S. Navy Tailhook scandal of 1991 are isolated incidents. We know now that the issue is deeper and more insidious and the filmmaker deftly brings it to the screen.