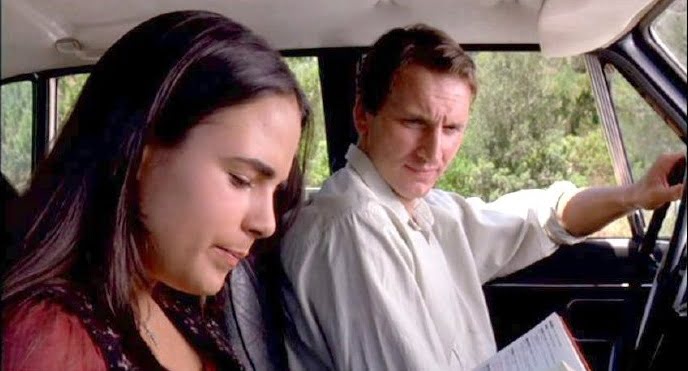 18-year old Phoebe O'Connor (Jordana Brewster) spent her teen years possessed by the memory of her older sister Faith (Cameron Diaz). Faith left home years before to go to Europe to "do something important." She died. Phoebe has always questioned the death and finally leaves home, herself, to find the truth in "The Invisible Circus."

Phoebe O'Connor (Jordana Brewster, "The Faculty") remembers the magic her late father (Patrick Bergin, "Sleeping With the Enemy") and her sister Faith (Cameron Diaz) brought into her life as a little girl. Now eighteen and living alone with her mother (Blythe Danner), Phoebe needs to understand her sister's death, a purported suicide which took place halfway around the world. After provoking her mother to tears, Phoebe runs away to Europe to retrace the steps of Faith and her boyfriend Wolf (Christopher Eccleston, "Elizabeth"), the pair who once brought her "The Invisible Circus."

"The Invisible Circus" is one of those movies that you can enjoy in a numb way on a rainy day when you're sick in bed. Watching it is like having a book read to you by someone who can't enliven his voice above a monotone.

Writer/director Adam Brooks ("Almost You") clearly exposes a source novel (by Jennifer Egan) by his use of extensive voiceover narration and flashbacks. Phoebe tells us how wonderful things were when she was a child, even as she lets slip that both she and her mother were kept at a distance from dad and Faith's close relationship. Rebellious Phoebe dares to suggest Mom didn't understand her own husband as much as she, his daughter, did as a child. Once in Europe, the narration is given over to Wolf, who fills in the parts of her sister's story that Faith's postcards glossed over, in an ever tightening circle. An affair of proximity/comfort is fallen into.

Some liveliness is added to the proceedings by the flashbacks taking place in the tumultuous 60's and the present action taking place on location in Paris, Berlin and Portugal. Yet even these aspects aren't fully realized, as much discussed drugs are nowhere to be seen in the flashbacks and a present day acid trip in Paris is handled embarrassingly.

Brewster isn't bad as the central character whose search for truth ends with some image shattering reality. The camera certainly loves her dark, exotic looks. Diaz is also OK as the idealistic Faith whose desire to change the world leads her down an ironic path. (The two's contrasting dark and light looks can be explained away by the casting of their parents.) Unfortunately, Diaz and Eccleston, a usually fine actor, never really seem to connect except on a superficial level. Eccleston seems like a nice guy in a long haired hippie wig with Faith and simply uncomfortable in his later scenes with Brewster. Still, he adds a bit of class to the proceedings.

At least Brooks keeps things moving along at a fairly steady pace, although things begin to drag a bit as the climax approaches. Cinematography by Henry Braham ("Waking Ned Devine") presents a bright San Francisco but rather dank looking Europe. Landscape is kept to a minimum in favor of close character shots.

"The Invisible Circus" is both overwrought and undercooked.

Adapting the novel by Jennifer Egan, Adam Brooks scripts and directs this road journey/coming-of-age story about a young woman growing up in the 70's. By the beginning of that decade, the hippie philosophy of changing the world through peace and love had mutated into change-through-terror. In Europe, radical factions like the Bader-Meinhoff Gang were using guns and bombs to affect change, attracting revolutionaries from around the world.

Faith and her boyfriend, Wolf (Christopher Eccleston), leave the staid safety of San Francisco to check out what's happening in Europe. After wandering the continent to find themselves, Faith is drawn to the excitement of the Red Army and joins the terrorist group, leaving Wolf behind. Faith's fails to prove herself as a revolutionary and is abandoned by the gang. She joins a splinter faction and, when she delivers a bomb to the offices of a prominent industrialist one night, an innocent man is killed. Faith is changed forever by the incident.

Years later, after Faith's death in Portugal, Phoebe takes the postcards that her sister faithfully sent her, kisses her mom (Blythe Danner) goodbye, and heads to the Continent. Once there, she traces Faith's movements from Amsterdam to Berlin to Paris where she finds Wolf. Her appearance at his doorstep and her mission cause the expatriated American to join Phoebe on her quest. A romance ensues. During the journey Phoebe convinces Wolf to tell her the truth about her sister and this truth is to change Phoebe forever.

"The Invisible Circus" is throwback film that feels like it was made in the 70's. There is an innocence to both the story and its telling that is rather refreshing. It does not try to recreate events of the day. Instead, it shows the essence of the idealism the young possessed at the time. Faith personifies the free spirit that sees herself as the vehicle of change for the whole world. When her ideals are dashed by the results of her violent actions, it reps the loss of innocence for both Faith and the radical youth movement.

The focus of the story is on young Phoebe as she struggles with the loss of her sister without understanding why she died. Phoebe lived, vicariously, through the postcards from Faith, seeing the world from her sister's eyes. Faith's death and Phoebe's newfound independence cause the young woman to follow in her sister's steps. The ensuing journey is both physical and spiritual for Phoebe as she finds herself, love and, finally, the answers she seeks. It's an interesting story of a young woman whose experiences and pain turn her into a wiser, though more melancholy, young adult.

Jordanna Brewster does a solid job as Phoebe. She has to carry the bulk of the screen time and actually matures as the story progresses. The young actress acquits herself well. Cameron Diaz has the difficult role of being the idol of her sister's eye and her character is held at arm's length to be examined by her sister (and the viewer). Christopher Eccleston is believable as Wolf. He, too, has a tough role and walks a fine line between weakness and strength. Blythe Danner's is little more than a cameo performance, but she does do a good mom. Patrick Bergin appears in flashback as the girls' father.

Production is well done with beautifully selected European locations. It's almost a travelogue as we journey to the canals of Amsterdam, the streets of Paris and the lush scenery of Portugal. It looks good, too, with the photography Henry Braham and costumes by Donna Zakowska lending to the feel of the 70's. There is also a surreal element, nicely handled, when Phoebe meets the members of the title troupe in a display of magic, juggling and dance.

"The Invisible Circus" is a good coming-of-age tale that has a sensible arc to its story. It should have an attraction for more mature teens and young adults, though I doubt if it will set any fires.