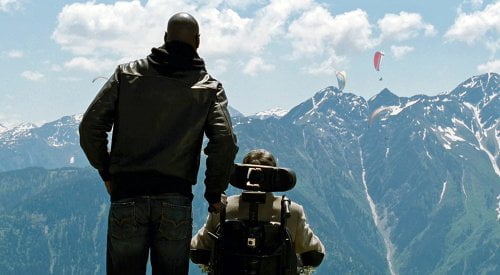 Ex-con Driss (Omar Sy) needs a job interview to maintain his welfare benefits. He applies for a job he knows he will be refused – caretaker for a wealthy industrialist who was made quadriplegic in a hang gliding accident. He is asked to return the next morning and is shocked when Philippe (Francois Cluzet) offers Driss the job on a trial basis. This begins what will become a beautiful friendship in “Intouchables.”

When quadriplegic millionaire Philippe (François Cluzet, "Tell No One") is in the market for a new caretaker, many men with serious demeanors and ripe qualifications file by, but Philippe notes the strapping Senegalese hoodie-wearing immigrant, Driss (Omar Sy, "Micmacs"), who boldly flirts with his assistant Magalie (Audrey Fleurot, "The Women on the 6th Floor") and demands a signature for his employment benefit form. Philippe offers Driss trial employment - after all, most only last a couple of weeks anyway - but he has an uphill battle convincing the rest of Philippe's staff to trust him as Philippe and Driss become "The Intouchables." France's biggest box office success to date by writer/directors Olivier Nakache and Eric Toledano is sure to put their star, Omar Sy, on the global map. Sy, who beat out "The Artist's" Oscar winning Jean Dujardin for France's equivalent award, the César (the film was nominated for 7 others), explodes onto the screen with a star's confidence and charisma, bigger than life and bursting with it. This is the type of film French/Algerian star Daniel Auteuil has specialized in in France, with films like "My Best Friend," "Conversations with My Gardener" and "The Eighth Day," mismatching an advantaged Frenchman with a social inferior, and the racial difference introduced here may make some American critics call 'foul' citing the 'Magical Negro,' but the character of Driss isn't played for sentiment. "The Intouchables" is certainly full of cliches and makes a few missteps (it's awkward title for one), but this is genre fare done extremely well. When Driss isn't smoking doobies on the street with his pals, he faces an incredibly crowded home situation that initially remains undefined. Suffice it to say, his presence after a prison stint is unwelcome by the middle-aged woman who works hard to take care of kids ranging from troubled teen Adama (Cyril Mendy) to one still in diapers. But Driss is surprised to discover he has a new situation - if he wants it - at one of the grandest homes in Paris, complete with his own private bathroom and new opportunities to woo Magalie. Nurse Marcelle (Clotilde Mollet, "The Page Turner") begins his training and if he initially balks at putting support hose on his employer (for circulation), he really recoils when he finds out what the disposable gloves are for, yet his blunt inquisitiveness with Philippe gives him practical reasons for what he is doing. When Philippe's right hand woman, Yvonne (Anne Le Ny, "Declaration of War"), cautions him about Driss ('these street guys have no pity'), she inadvertently defines just what drew him to the man. Then things start becoming fun. What's smart about Nakache and Toledano's script, based on a true story, is that Driss is out for himself and unedited. He soaks in his tub with headphones, oblivious to the calls of Philippe over a monitor. He bundles Philippe into a sports car instead of the 'practical' van he usually uses ('I'm not rolling you into the back like a horse!), then beats on a guy parked in front of Philippe's gates. When he learns of Philippe's female pen pal, he starts demanding Philippe ask for her weight and a picture, to make sure she's not a 'troll' or an 'invalid.' He's gauche at the opera, going into stitches viewing a man dressed as a tree then groaning loudly upon learning it's four hours long. Yet Philippe is mostly amused by all this and an entirely natural friendship is born. Eventually, Driss even wins over his toughest critic, Yvonne, even after teasing her mercilessly about the romantic interest of gardener Albert (Christian Ameri). There is the clothes-changing montage and the cultural music debate (Driss's identification of classical pieces is hilarious - 'It's an ad!' 'It's on the Paris Benefit wait line!'). Driss shows off his moves at a stuffy birthday party, then is dragged screaming on a paragliding adventure. Not everything works. There's a bit about a stolen Fabrege egg from Driss's interview that's introduced, dropped, then awkwardly resolved and Driss is showing buying a diamond stud earring which we later see briefly and only once on Philippe's ear. And we're also left to wonder why Driss would watch his adoptive mother cleaning an office building, but not offer help now that he's employed (he does keep trying to get Adama back onto the straight and narrow). There is also a subplot about Philippe's teenaged daughter, Elisa (Alba Gaïa Bellugi), that feels like an afterthought. The filmmakers make their hugest error, though, showing their film's real life counterparts over the closing credits. Where Cluzet looks much like the real man, Senegalese Driss is nothing at all like his Algerian counterpart Abdel Sellou, making this French import as much of a homogenized Hollywoodization as "The Vow." But Sy and Cluzet have chemistry to spare, the one a divide between exuberance and familial fierceness, the other immobilized, studied amusement. The physicality of both is also notable, Cluzet having the difficult job of only animating above the neck while Sy has boundless, loping energy. Le Ny, fiercely protective of her employer, conveys a well-founded, gradual melt towards Driss while Fleurot counters with a slow simmer with a surprising boiling point. "The Intouchables" is an extremely likable buddy movie that skates over its protagonists' backgrounds but coasts on their charms.

What could have been syrupy melodrama turns out to be a charmer – due to the excellent performances and fine chemistry between Cluzet and Sy. The differences between the characters - Philippe is incapable of the simplest movement and Driss is in perpetual motion; Philippe is fabulously wealthy and Driss is from the means streets of Paris; Philippe cannot have sex and Driss cannot get enough – show the marked contrast of their lives. They become close friends despite the huge difference in their social and economic status and the actors make it believable. Philippe sees something special in the mirthful Driss and the younger man’s limitless energy and randy good humor. Driss, loving his new luxury digs as Philippe’s full time nurse, is reluctant to do some of the more onerous care tasks, like changing Philippe’s diapers. He slowly gives in and soon this odd couple story takes off. Omar Sy (who won the Cesar Award this year for best actor) lights up the screen every minute he is on, which is most of the film. His animate behavior – always ready to dance or sing – is the polar opposite of paralyzed Philippe, performed convincingly by Francois Cluzet. It has to be a tough job as an actor to remain virtually motionless and still give a fully dimensioned performance. The screenplay, by co-directors Olivier Nakache and Eric Toledano, is rich with humor and great dialog. “Intouchables” is a true feel good flick. There are several blatantly clichéd scenes – Driss getting everyone on Philippe’s staff to spontaneously break into dance; a clothes changing montage as Driss sparks up Philippe’s wardrobe – but the directors and talented cast pull it off. “Intouchables” is based on a real life story, making the film that much more charming. Sy and Cluzet make a good team.