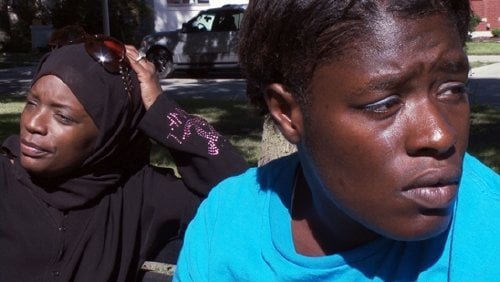 “The Interrupters” begins with the statement – One year in the life of a city grappling with violence. That city is Chicago and the violence is being met head on by a small, dedicated band of “violence interrupters” whose mission is to intervene in conflicts and deflect the violence. Three of their members – Ameena, Cobe and Eddie – are the focus of this documentary film by Steve James and Alex Kotlowitz.

Inner city violence in Chicago was reaching such epic proportions it outran the daily death tolls in Iraq and Afghanistan. Infectious disease physician Gary Slutkin, who believes that violence spreads like cholera, founded the organization CeaseFire to put his beliefs into action. Director Steve James ("Hoop Dreams," "Stevie") and his coproducer Alex Kotlowitz, whose New York Times Magazine article inspired the documentary, followed three of its members for a year as they attempt not to negotiate with gangs or get into the middle of arguments, but to save lives by stepping in as "The Interrupters." This may not sound like the most compelling subject matter, but James weaves some intriguing tales between his violence arbitrators and their subjects. At two and a half hours, the film holds up extremely well for its first two, but begins to lose steam for that last 30 minute stretch. The filmmaker uses famous case studies, most notably the beating death by 2x4 of the teenaged Derrion Albert, caught by an onlooker's camera, and the shooting of an innocent eighteen year-old felled by twenty-two - that's twenty-two - bullets, but he's also on hand with his camera to catch violence as it alights, once right outside CeaseFire's storefront office. The film's most amazing subject is Ameena Matthews. She was once an enforcer for her father, Jeff Fort, a gang leader as notorious in Chicago as Al Capone in his day. Now a mother of four married to a Muslim Iman. This striking woman is fearless and absolutely brilliant in choosing the right stance with which to enter a fracas. Tio Hardiman, the Director for CeaseFire Illinois, says she can get in where guys can't and we watch her defuse a street blowup, walking a young man to his home and reliving the incident with laughter. 'Get them to laugh at themselves, find their soft spot,' she says, making sure that soft is not mistaken for weak. She gets involved with Caprysha, an eighteen year-old who's had to fend for herself all her life and yet has the personality of a big kid - Ameena invites her to go skating at her daughter's birthday party and when she doesn't show up we discover she's in jail. Ameena's patience is inspiring, her heart big enough to take on more and more children, as she continues to be there for the lost teen. Cobe Williams is a much more laid back interrupter. His amusing wife tells the camera that he's 'very, very nerdy.' Cobe works with Lil Mikey, a teenager just out of prison. They return to the barbershop Mikey robbed at gunpoint at the age of fifteen so Mikey can apologize. He's confronted by a woman who was there that day with her children and has been traumatized ever since. Mikey doesn't even remember seeing her that day, a powerful bit of cinema verite that shows the extreme imbalance between perpetrators and their victims. With Cobe, we visit a woman so afraid of gang violence coming to her door because her two sons were in opposing groups she moved out of her apartment and didn't give them her address. Cobe gets the two brothers to talk to the point of admitting each would step in should one of their friends attempt to hurt his brother. The third interrupter, Eddie Bocanegra, is guilt ridden over the murder he committed at 17. One of the film's lighter moments comes when he goes to see his mother in Mildred's Lounge, a bar run by a grandmother with a saucy sense of humor. And then we wonder why so many middle-aged women are drinking in the afternoon. (Funnier is the reaction when Ameena calls for help on the street because she locked her keys in her car.) The film equates these neighborhoods with a war zone and it's not just the opening statistics that make it seem that way - violence springs forth from the most unexpected places and for reasons that are often hard to comprehend. The point is made that this is learned behavior, passed down from generation to generation, beginning in the home, caused by economic hardship. Ceasefire hasn't begun to battle the cause and yet the difference they make is incredible. Cobe can barely contain ex-con Flamo even when Flamo acknowledges the wisdom of his words. By the end of the film he's saying he wants to be one of the storytellers, not living the lifestyle. We see a brief segment of the interrupters being trained, but it doesn't prepare us for just how calm and intelligent they are in negotiating emotions. The choice of a word can make all the difference, such as when an interrupter equates the total of 500 years in prison shared around a table as their group wisdom. James's film isn't perfect. He uses seasons to break his film into four segments but doesn't analyze how the time of year affects the streets. And while he and his editors have pulled fascinating strands of interconnected stories out of all his material, the documentary should have had a natural end at the two hour mark - the last thirty minutes lose sharpness of focus and began to drag. But "The Interrupters" is a triumph of evidence on how one person's actions can begin a groundswell of change.

Steve James, who made the landmark sports documentary, “Hoop Dreams (1994),” moves to the inner city of Chicago with co-producer Alex Kotlowitz to tell the story of those brave few who often put their own lives on the line to intervene and defuse neighborhood conflicts before they end in an explosion of violence. The three people that personify the violence interrupters and their efforts to protect their communities are the focus of this heartfelt – though too long – commentary. Ameena, Cobe and Eddie each have their own story and reasons for dedicating their lives to peaceful coexistence in a place where violence is a daily occurrence. Ameena Matthews is the daughter of a notorious Chicago drug lord. At age 16, she became a drug enforcer for her father. She discovered the Muslim faith and became a firm advocate against violence, though she will use the threat of violence to accomplish her peace mission. Cobe Williams was scarred at the tender age of 11 when his father was murdered. In and out of prison during his young life, he found solace and support from his friends and family, especially his young son. Cobe’s sense of humor and good-nature is his key in stopping what is mainly family, not gang-related, violence. Eddie Bocanegra committed murder at the age of 17 and uses his work as an interrupter as penance for his crime. Eddie’s focus is on the younger kids in the ‘hood as he tries to get them off the street. His empathy for the people he is trying to help is palpable. Each of the three has also befriended one of the troubled youths and they work hard to get their wards on the straight and narrow path. The filmmakers wear their hearts on their sleeves as they delve into the whole campaign, led by an organization called CeaseFire, to put an end to violence in the inner city of Chicago. Their dedication to “The Interrupters” equals that of their subjects but the film’s 125 minute run time feels bloated as director James makes his point, then proceeds to make that point – violence is bad, peace is good – repeatedly. Unlike “Hoop Dreams,” which captivated me for its entire three hours, “The Interrupters” begins to fade at the three quarters mark. Still, it is an eye-opening document that leaves you feeling hopeful because such people as Ameena, Cobe and Eddie exist.